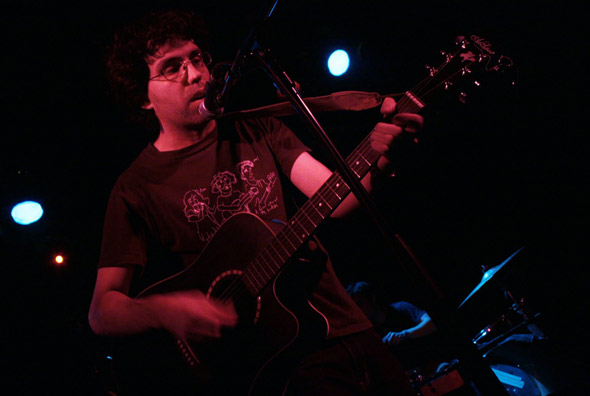 DIY philosophy is the basis of all contemporary music.  All bands start doing things their own way and it’s just a matter of will power to go far.  A strange case, talking about Spain, is that of The Missing Leech, an anti-folk musician who has traveled far and wide throughout the world, from Barcelona to Canada, to the States, Iceland, UK, France, Germany and New Zealand, where he recorded most of his first record A Set of Dreams in Lo-Fi, and contacted people like The Bats and The Clean (almost the same band, but not quite, as you well know) and Chris Knox, former member of kiwi legends The Tall Dwarfs. 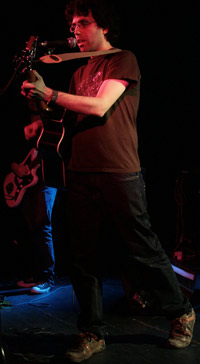 The Missing Leech, alter ego of Maurici Ribera, was presenting his second record Trompetes a Holanda (Trumpets in Holland) entirely sung in Catalan, at Barcelona’s La 2 De Apolo on Tuesday, November 8th, the first gig of a tour that will be traveling Europe again.  This time, Ribera played the more intimate room of the Apolo venue with a full band, as opposed to his solo anti-folk persona.  Preceded by Martian performer Esperit, who mixed atmospherics, cha-cha-cha, and Tibetan chants (very Martian indeed), The Missing leech started the gig introducing new songs from his latest release like "1998", "Tresor Enterrat" (Buried Treasure) or "Vic Chestnutt", all united by an urgency that mirrored Tyvek and Daniel Johnston (QRO live review) and mixed nostalgia, hope and a surreal sense of humour.

The medley was a private affair of Ribera’s own personal view of the world we live in and how he’s evolving in the music world.  Songs like "The Girl vs. David Cronenberg", "Propaganda" (foreseeing the general election in Spain of the 20th of November) and "Confusions" led to the most electric moment of the night, the flat-out, full-volume and abrupt version of his new song "Unicors Psicodèlics" (no need to translate the title, really, but also with the politicians as the centre of his critic).  From then on, The Missing Leech took the whole of the venue with local hits like "TV Crusaders" – an effective critic on the world of television – and "Farewell Song", with Ribera playing and dancing on the venue’s bar and the audience singing along.

The Missing Leech is a total unknown for the average QRO reader, but Ribera, and the supporter of the night, Esperit, is the image of the DIY in Spain, a country focused on indie bands or the wrong side of the old concept of the singer-songwriter of the ‘70s.  That is, boring.  Ribera’s ability to make monologues and lyrics out of his own experience and turn them around into something completely surreal, as it happens with his song "Història del Meu Segon Disc" (The Story of My Second Record), where he stretches the sentences into the infinite, beginning in Canada and ending in Iceland almost literally, connects with the audience and causes a reaction of approval but also of a sort of rebellion as Ribera, The Missing Leech, also talks about ordinary life as most of his peers or his songwriting influences, but he’s able to see it in colour – he sees the extraordinary in it.  And this may happen as well in other places of the planet (just check QRO’s page and sure you’ll find that) but in Spain, a place where most musicians seem to be self-centered, it’s a refreshing approach to music. 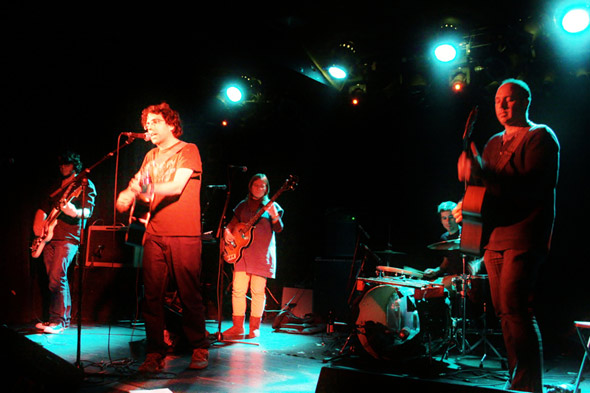