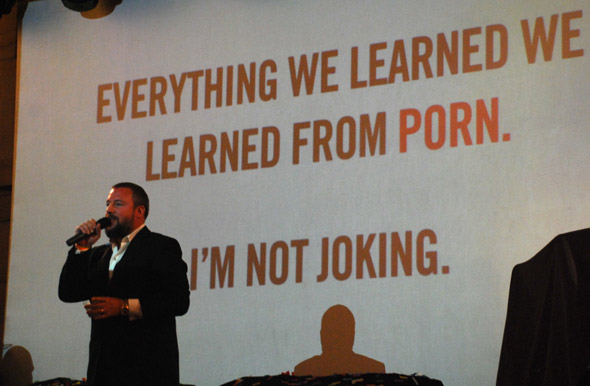 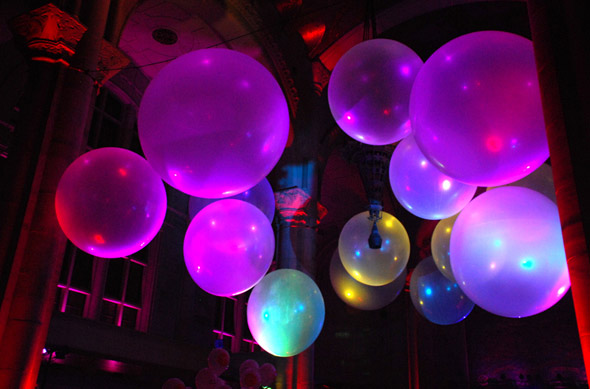 The bank opened at 7:30 PM, letting in the line of RSVPs, press, VIPs, and more who had formed outside as it started to rain.  It was an impressive early turnout for an event that was scheduled to go until 4:00 AM – VICE had asked press to show up early, but the general public RSVPs (who always form the bulk of an audience) weren’t being let in on a first-come, first-served basis; rather, after the overwhelming RSVP response to the event, VICE had done a lottery to see which RSVPs were accepted (though perhaps those who were accepted showed up early, because they weren’t notified of that & their assured entry, unlike those whose RSVPs weren’t selected).  There was a surprisingly long period of milling about, getting free drinks, staring at the massive balloons above and admiring of the bank-turned-event space – the most interesting thing was the beugel/swing top cap on the somewhat large & heavy Grolsch beer bottles. 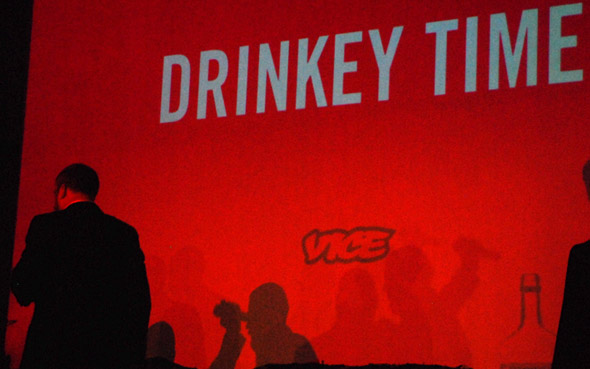 For all the talk of news (and porn), the rest of the evening – i.e., why most people had come (the rest came just for the free drinks…) – was devoted to music, the reason you’d probably first heard of VICE.  On the stage that Smith had stood were Tanlines, Death From Above 1979, and finally Rick Ross.  Unfortunately, they all failed to truly ignite the crowd – Tanlines are still better as background music than actually somebody to watch, while DFA1979 lacked the out-of-control crowd they’ve been getting ever since their reunion started earlier this year (there seemed to be more photographers than fans, though Sebastien Grainger & Jessie Keeler still gave it their all), and many were either too drunk, too tired, or no longer there by 1:00 AM for Rick Ross.  Downstairs, past some southeastern Europeans hocking a new type of electrical bicycle, was a basement space where the lesser-known local bands played.  There was almost no lighting, bad sound, and many at the event couldn’t find the space (there were no signs pointing to the stairs in the lobby that took you downstairs, nor to the small doorway that led to the actual basement; only if you were trying to find the bathroom might you make it to the basement, though at least there was a bar there), but it was actually the more interesting arena, as bands like Unknown Mortal Orchestra, Anamanaguchi, Total Slacker, and The Men all were kind of more compelling than the bigger names upstairs. 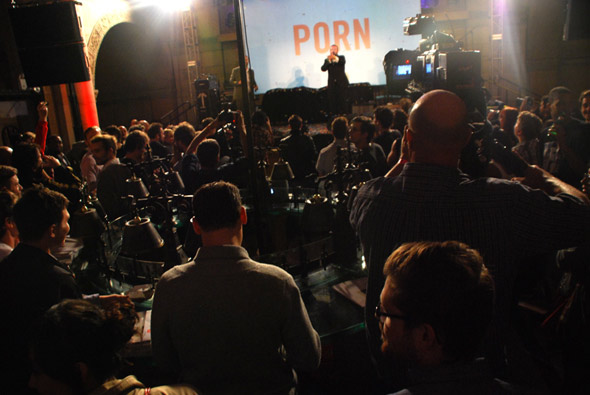