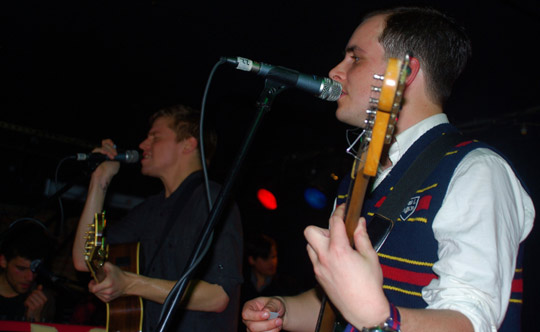 Brooklyn’s White Rabbits (all originally from Columbia, Missouri) saw great things in 2007 with the release of their debut full-length, Fort Nightly (QRO review), festivals like Coney Island’s Siren (QRO 2007 festival recap), and even appearing on Late Night with David Letterman.  But after opening up on tour with Spoon (QRO live review) in early 2008, they disappeared from the scene to work on their follow-up, It’s Frightening.  They even enlisted Spoon’s own singer/songwriter Britt Daniel (QRO photos) as their producer (the reason he was seen at so many shows at Music Hall in Williamsburg, like Constantines – QRO live review).  But it had been too long for the much-loved local act, and they returned with a pair of dates at New York’s Mercury Lounge, ending on Thursday, February 19th.

For a band that’s headlined the aforementioned Music Hall (QRO venue review), as well as its across-the-river ‘Bowery Presents’ twin, Bowery Ballroom (QRO venue review), to be playing the smaller, ‘little sister’ Mercury (QRO venue review), even two nights in a row, meant high interest, with both shows selling out.  By the time the Rabbits took the stage (well later than their scheduled start-time, even for usually half-hour-off Mercury), the floor was packed, wall-to-wall.  With six people in the band, there was a lot of equipment on the stage, including two drum sets (for drummer Jamie Levinson and multi-instrumentalist Matt Clark) and singer/pianist Steve Patterson’s piano was smack in the middle, perpendicular to the stage lip, dividing Clark, Levinson, and singer/guitarist Greg Roberts from guitarist Alex Even and bassist Adam Russell (the only one without a double-duty instrument…).

Click here for photos of White Rabbits at Music Hall in Williamsburg in Brooklyn, NY on June 7th, 2008 in the QRO Photo Gallery

Click here for photos of White Rabbits at Webster Hall in New York, NY on March 4th, 2008 in the QRO Concert Photo Gallery

But the tight fit was nothing compared to the real challenge facing the Rabbits: playing new material after having been gone for so long.  The songs that dominated the set list (QRO photo) were entirely new to the crowd (unless one was at the show on Wednesday).  And while the prior night’s audience was likely thick with ‘in the know’ hipsters, and press looking to get a glimpse of It’s Frightening, Thursday was more the party crowd (bridge & tunnel?…) who wanted to hear their favorites.

The band set the tone at the start by opening up with the new “Chevy Chase” (note: titles of new songs taken from set list; may have been/will be changed on album), a frantic, pressing piece whose dance was a little ominous.  On Fort Nightly, White Rabbits played saloon-style old-timey dance hall with fresh energy, a ‘Wild (South)West’ frontier/border town kind of kick.  Since then, it appears that the band’s vistas have only widened, with the Frightening pieces drawing from even further afield.  Dominating the early part of the set was the back-to-back “Ethiopique” and “Burundi”, two songs of great click-clack press, the former a little world-wise sly, the latter feeling almost reminiscent of well-covered New Orleans Mardi Gras number, “Iko Iko”.  With the Mexican & Caribbean influences on Fort Nightly, it’s no surprise that White Rabbits would look back across the Middle Passage (interestingly picking, as titles at least, two East African nations better known these days for being next to African trouble spots, whether Sudan & Somalia or Rwanda & Congo).

Click here for photos of White Rabbits at Bowery Ballroom in New York, NY on December 13th, 2007 in the QRO Concert Photo Gallery

Click here for photos of White Rabbits at Highline Ballroom in New York, NY on July 9th, 2007 in the QRO Concert Photo Gallery

Some new pieces didn’t hit quite as right.  The slower “Sleep” was a little disco-y, not what the band does best, and while the following “The Salesman (Tramp Life)” was interesting in how it sounded more like in an empty hall, rather than a bustling one, it didn’t yet have its place, live.  Similarly, while “Rudie Fails” (obviously drawing from twin-tone ska – live, White Rabbits had long covered Bob Dylan’s “Maggie’s Farm” the way that The Specials did it) had nice dual vocals, as opposed to the usual trade-off between either Patterson or Roberts taking the sole lead, it was a little muddled in its various beats.

If the middle portion of the set sagged a little, White Rabbits brought things back not by turning to their staple energetic sound, but with even less dance, on the sad “Company I Keep”.  No piece on the night showed as much growth for the Rabbits as “Company”, but they didn’t fail to end on some dance hall, closing with “Ragtime” and “Punk” (both since renamed, now “Right Where They Left” and “Lionesse”, respectively).

This also isn’t to say the band ignored Fort Nightly.  Right after opening with “Chevy Chase”, the band hit up their single “The Plot” – somewhat surprisingly, since they were relatively sick of playing it over a year ago (QRO interview).  Nightly’s great starter “Kid On My Shoulders” livened up the weaker central section.  And when they returned from their self-admittedly silly encore break (Mercury Lounge lacks a backstage – they just stood at the side of the stage, in front/on the stairs from the stage floor, and given their number, Levinson couldn’t even fit in there…), they came back to the Fort (after acknowledging Levinson’s mother at the front of the crowd – QRO photo) with “Take a Walk Around the Table” and “While We Go Dancing” (though eschewed the one loud, drunken audience member’s repeated requests for “Navy Wives”).

Only the Saturday prior, White Rabbits’ local friends Harlem Shakes (QRO spotlight) returned from an even longer hiatus (QRO live review), previewing the material from their own upcoming release, Technicolor Health.  But Shakes’ Health comes out next month, while Rabbits’ It’s Frightening doesn’t debut until May 19th, two months after these dates and two years after Fort Nightly (and the title will only further the name confusion between White Rabbits and Glasgow’s Frightened Rabbit – QRO live review).  What’s more, while Shakes will be touring before Health’s release, Rabbits don’t have any more dates scheduled until May.  That’s putting even more pressure on It’s Frightening, like it put on the band’s return show – and if that concert was the re-introduction it was meant to be, it points to good things on the horizon.