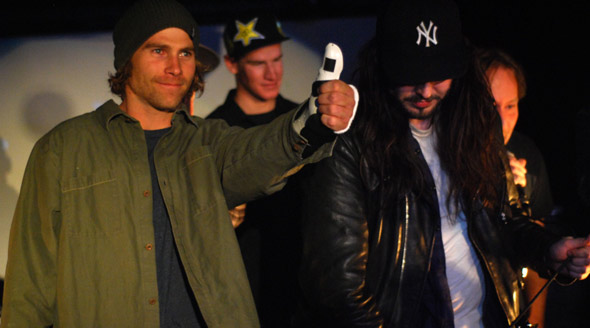 Santos Party House in New York City seems likely an unlikely and incongruous place to have a party in celebration of the upcoming 2012 World Snowboarding Championship, in Oslo, Norway, given that it’s a music venue halfway around the world in a megalopolis that’s more comfortable putting wheels on those boards & hitting the pavement.  But never fear, Andrew W.K. is here, and he & friends brought the snowboard party to 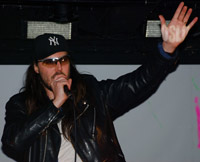 The World Snowboarding Championship will be held in Oslo February 10th to 19th, with snowboarders from around the world competing in both slopestyle and halfpipe.  Andrew W.K. was hosting the kick-off party because he’ll be co-hosting the event with acclaimed snowboarder (and one-half of the currently top team on this season of The Amazing Race) Andy Finch, and Santos was throwing the party because W.K. co-owns the Manhattan venue (QRO venue review), and instead of sticking to snowboarding’s traditional slopes, the WSC decided to reach out & throw down in the greatest city in the world (just ask Letterman…), New York.

The event opened at a private reception downstairs at Santos, where snowboarders mingled with press in the midst of a silent auction of snowboarding gear & art – not to mention a healthy open bar, as well as hors d’oeuvres to go with the drinks, including authentic Norwegian Jarlsberg cheese.  Then the blonde Norwegian hostesses introduced WSC CEO Henning Andersen, as well as such competing snowboarders as Jamie Lynn, Ty Walker, and more (admittedly, if you don’t live on the mountains of the Rockies or Scandinavia, you might not have 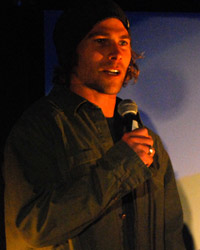 recognized them…).  They all talked up the big event – though it seemed as if there’s some sort of competition with the Olympics, given some rather odd anti-Olympics comments from various folks.

You can’t keep Andrew W.K. off the stage for long, who thanked Norway for its diverse music (“Metal, death metal, black metal…”) and dared co-host Finch to an unspecified “hosting challenge” – to which Finch gave the thumbs up, or maybe that was just his thumb splint doing the talkin’ (still a lot less pressure & a lot more reliable money hosting than competing – just ask Phil Keogan, Finch…).  W.K. then introduced debut of the video for his WSC 2012 theme song, “Go Go Go Go”:

Click here for photos of Andrew W.K. & band from this show in the QRO Concert Photo Gallery

W.K. didn’t skimp on the live music, either, as he played “Go”, his classic
“Party Hard” and a few more, with a backing band that included Andersen (who joked in his introduction that there was no way he wasn’t going to use his right as WSC supremo to get to be in the band…).  And it closed 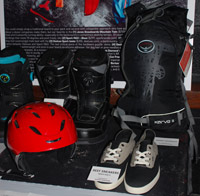 out by inviting everyone upstairs to the triumphant return to New York of Norway’s own punk legends Turbonegro, who thrashed out a killer show like some cross between Les Savy Fav (QRO album review) and A Clockwork Orange.

QRO doesn’t quite have the financial or geographic reach to go to the World Snowboarding Championship in Oslo next year, but with Andrew W.K. on the packed slopes, already know that it’s going to be one hell of a party.