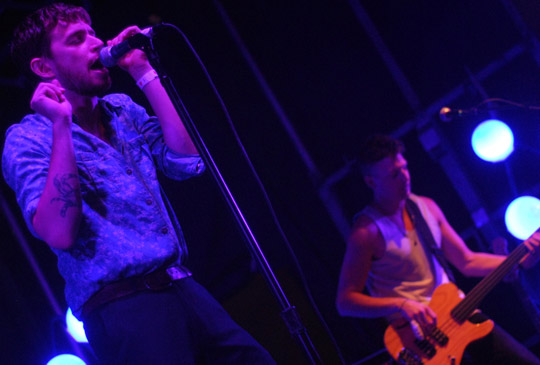 In this New York summer concert season, the weather has often not complied with event organizers’ wishes.  Rain forced acts to cancel at All Points West, River-to-River, and Pool Parties (QRO Festival Guide), and various park officials seemed to have had particularly quick hooks.  June & July were unseasonably cold (remember Global Warming?), and only well into August did the real heat kick up (oh, there it is…), but all of the Big Apple’s various outdoor shindigs are set up well in advance of any Doppler forecasts, and you can only cross your fingers and hope everything works out.  But one outdoor NYC venue that’s kept things going has been Hudson River Park’s Pier 54 (QRO venue review), which concluded its RiverRocks season on Thursday, August 13th with Yeasayer. 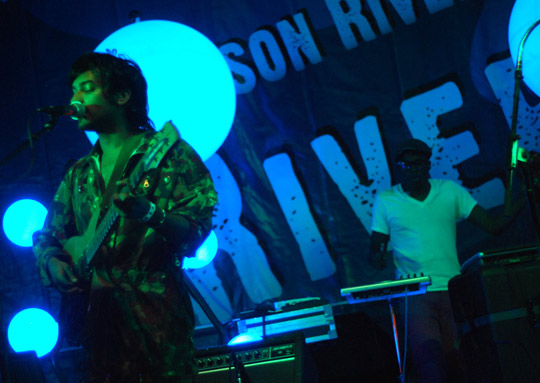 Admittedly, one advantage RiverRocks has had is that they only threw three shows this summer, Matt & Kim on July 11th (QRO live review), Ted Leo & The Pharmacists on July 23rd (QRO photos), and Yeasayer.  But don’t think that Pier 54 hasn’t faced its challenges, from the crowds threatening to overwhelm the barriers during pretty much all of Matt & Kim, to thunder very nearly canceling Ted Leo entirely (did force the bumping of the openers).  And being an actual (albeit no longer in service) pier, all weather warnings come with double the risk, whether from wind, lightning, tsunami… you name it.  But the heavens held off for the final RiverRocks event (and Hudson River Park upgraded to the sturdier barriers…). 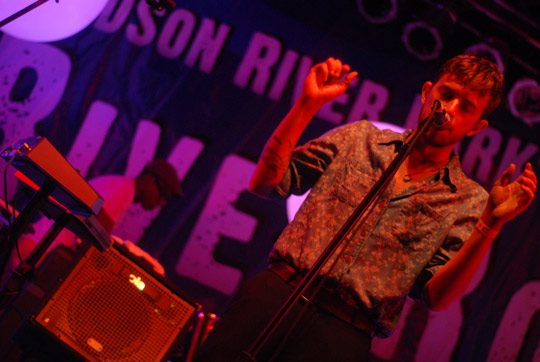 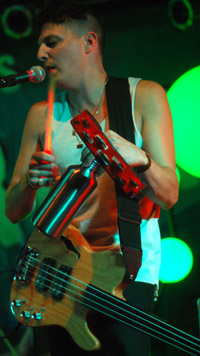 Yeasayer have been turning a lot of heads since their 2007 debut, All Hour Cymbals (QRO review), mixing industrial and tribal sounds, along with near alt-choral vocals – pulsing rhythms married to inventive techniques.  Not quite as wild and electric as Matt or Kim or Ted, they did fit better with threatening skies and stultifying heat (plus, after security stopped one guy who was trying to mosh during opener Amazing Baby – QRO photos – no one else felt like daring to try during the headliner).  Instead, the intensity was more direct, from the band, into the audience, as Yeasayer mixed between Cymbals favorites like “Wait For the Summer”, “2080”, “Sunrise” – plus “Tightrope”, their contribution to Dark Was the Night compilation (QRO review) – and some of the new material they’ve been playing live recently, like the speedy, wacked-out Yeasayer in “Amblin’ Amp”, or more choral, echoing new songs like “O.N.E.”  The venue & the band also defied the elements with one of the best lighting arrangements at any outdoor NYC summer ‘09 show this side of Jay-Z, with big & little balls of light arrayed across the stage, colors changing both rapidly and slowly – in fact, the overcast skies actually helped that pop. 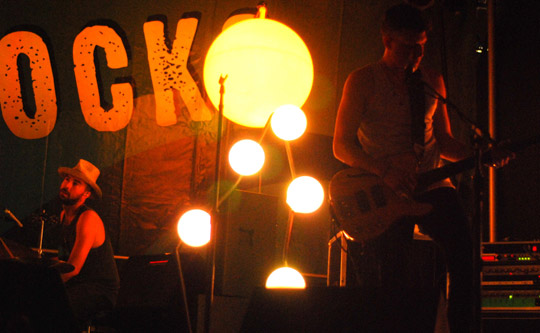 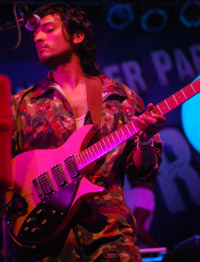 Yeasayer’s show marked the beginning of really the last main weekend of free NYC outdoor shows, followed up the next day by the last one at South Street Seaport (QRO venue review), and Sunday with the last one at Central Park SummerStage (QRO venue review).  While not as many young kids were there as for Matt & Kim (but are there ever?…), the VIP viewing area to the side was packed like sardines (security was being particularly pushy about no VIPs standing in the lane that went all the way down the house-right side of Pier 54), leaving some photographers with no place to watch but in the photo pit (but they sat, for the sake of the regular fans).  RiverRocks ended its 2009 season a little more art-rock, but still under clear skies. 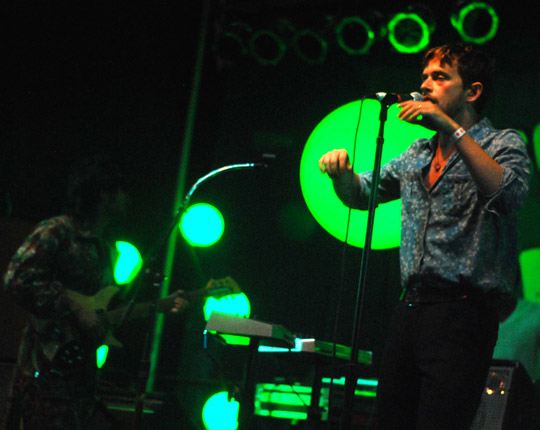