You Me At Six & All Time Low 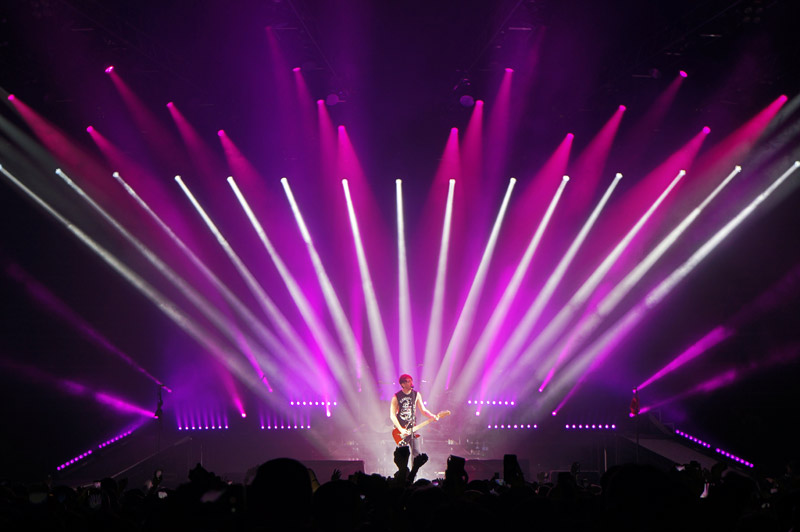 One great support band, two incredible co-headliners and five massive shows; U.K. fans have been going wild for the 2015 tour that is not to be missed as it sees the hugely successful British rock band, You Me At Six, come together with equally successful All Time Low. It’s one thing to have one big headline act during a tour, but add a second into the mix and you’re in for an absolute treat (plus double the fan-base from across the country – screaming).

Tuesday, February 10th saw the co-headliners, All Time Low and Your Me At Six, rock up in the Birmingham Genting Arena and the atmosphere created by the adoring fans was enough to instantly feel the buzz of excitement upon entering the building.

First up Walk The Moon, an American pop rock/indie band from Ohio, who thoroughly warmed the crowd with a great rendition of The Killers’ “All These Things That I’ve Done” and their own “Anna Sun” from their debut album (QRO review). You could have easily cut through the eager anticipation that could be felt radiating from the crowd as time went on.

Click here for photos of All Time Low at 2013 Riot Fest in Chicago, IL in the QRO Concert Photo Gallery

Click here for photos of All Time Low on Vans Warped Tour at Verizon Wireless Amphitheatre in Maryland Heights, MO on July 5th, 2012 in the QRO Concert Photo Gallery

Finally, the time came to welcome the first of the headline acts, All Time Low, who blasted the crowd with “A Love Like War” from Don’t Panic: It’s Longer Now (2013 – QRO review) as their opening track – quite possibly one of the best songs they could have chosen to start their performance; it was strong, energetic and a fantastic example of the high quality talent to come from the entire band in the subsequent tunes. The length of their set was an absolute dream, as they worked through 15 of their hit songs, including: “Lost in Stereo”, “Damned If I Do Ya (Damned If I Don’t)”, “Somewhere in Neverland”, “The Reckless and the Brave” and many more. It was pleasing to hear them play a couple of tracks from their early days too; “Weightless”, from Nothing Personal (2009) and “Dear Maria, Count Me In” from So Wrong, It’s Right (2007) which the audience went wild for; they know how to please their crowd.

Of course, this tour coincides with the release of All Time Low’s new single, “Something’s Gotta Give”, which was released in January. Their new album Future Hearts is due out in April and, if this track is anything to go by, it’s going to be fierce. Their performance of the single was unforgettable with Alex Gaskarth’s top-notch vocals, the use of perfectly timed pyrotechnics and, despite only being recently released, the crowd’s well-rehearsed singing.

Click here for photos of You Me At Six at Irving Plaza in New York, NY on October 19th, 2014 in the QRO Concert Photo Gallery

Next up, it was You Me At Six’s turn to rock the crowd and they certainly lived up to their name as they stormed through their own long set list, setting the bar high as they entered with “Room To Breathe” off their latest album, last year’s Cavalier Youth. This was a powerful and energetic performance but they simply excelled further as they carried on to include the likes of: “Stay With Me”, “Carpe Diem”, “The Consequence”, “Crash”, “Forgive and Forget”, and more. The only thing missing was a song or two off their debut album Take Off Your Colours (2008). It was surprising that not one track featured despite it’s successful reception on release, although with such a strong set list already, featuring pieces from Hold Me Down (2010), Sinners Never Sleep (2011) and Cavalier Youth, the gig was always going to be a winner regardless.

Josh Franceschi and the band put on a spectacular performance, broken ankle to boot, and it was clear to see how much he wanted to be there, touring his home country with a fantastic co-headliner, in front of his treasured fans.