Beacon Theatre in located on 2124 Broadway, Manhattan, between 74th and 75th Street.  Opened in 1929 as a movie theatre, it shifted to housing music performances in the 1970s...

Beacon Theatre in located on 2124 Broadway, Manhattan, between 74th and 75th Street.  Opened in 1929 as a movie theatre, it shifted to housing music performances in the 1970s (including a 1976 series of shows by The Grateful Dead).  It was added to the National Register of Historic Places in 1982, which mattered five years later when an effort to convert it into a nightclub was blocked over the damage it would do to its protected architecture.  Since then it has continued to host concerts (as well as the Tony Awards since 2011), leased and managed by Cablevision, which also leases Radio City Music Hall and owns Madison Square Garden.

In many ways Beacon Theatre is a slightly smaller version of Radio City – or a larger version of Town Hall, which also lies on Broadway.  It has an old-style movie box office at the entrance and a foyer with drinks and merchandise.  There is a large floor and two balconies (with bars in both foyers), all with seats, but there are no box seats to the sides.  The drink prices are high (and the bartenders always check IDs), though they serve upmarket cocktails (and the 20 ounce Heinekens cost the same as other 16 ounce imported beers, and only a dollar more than the 16 ounce Budweisers).  Being part of the MSG circle of venues has given it an upgrade in lighting and sound.

While Beacon stands in the shadow of Radio City to the south, it is still more famous than Town Hall or United Palace Theatre to the north.  Its Upper West Side location is not where you’d normally go for a concert, but isn’t hard to reach.  It has the positives and negatives of any seated venue: you can’t dance or worm your way to a great spot, but do have a great view and aren’t squeezed.  MSG has been pushing it more as a concert venue for current acts in recent years (The National did a run of six shows there in 2011), to go with older acts like The Allman Brothers, who have played over 200 there, it’s a nice place to see a band as they’re getting bigger and bigger. 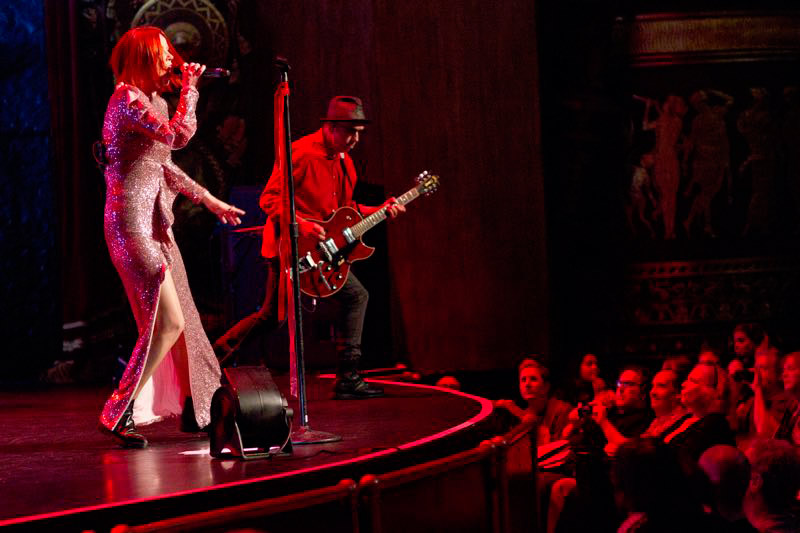