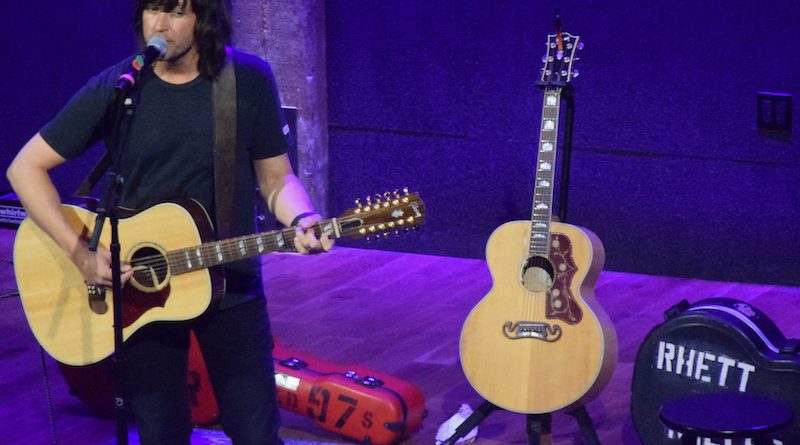 Click here for photos of Rhett Miller at 2014 SXSW in Austin, TX in the QRO Concert Photo Gallery

As everyone knows, just over a year ago, everything shut down. That very much included live music, from South-by-Southwest to dive bars, indeed seeming to be the first to shut down – and to be the last to reopen. We’ve gone through our annus horribilis, learned to wear masks and use Zoom, vaccines have been fast-tracked and are gradually getting into people’s arms [your correspondent got his first shot on April First], and live music is tentatively putting a toe back in the water. Friday was the first day that places in New York could have indoor shows with reduced capacity, and while most venues can’t make that work financially yet, a few can, such as the new City Winery NYC, which had its first ticketed show on Saturday, April 3rd, hosting Rhett Miller of the Old 97’s and a socially distant – but definitely excited – crowd.

City Winery came out of Knitting Factory founder Michael Dorf wanting to go upscale and into wine, but not losing the music. His first City Winery on Varick Street (QRO venue review) was a definite success, attracting the upscale crowd who wanted to hear acts ranging from folk singer/songwriters to their nineties favorites. It obviously tilted towards the solo artists, but not so highbrow as to be inaccessible. And City Winery became a brand, expanding to new locations across the country. Unfortunately, the New York City property market moves onward & onward, with the Varick Street location getting slated for Walt Disney redevelopment, and so that City Winery closed just before everything closed, but a new location was found on 15th Street and the Hudson River. The restaurant managed to open in October, with reduced capacity, and as soon as shows were allowed again, they came to the new City Winery, a free show on Friday, and Rhett Miller with both early & late shows on Saturday.

Taking advantage of all the space being on the Hudson River brings, the restaurant/venue is big, including a curved balcony with long table along the edge [where your correspondent was]. That room meant that tables on the main floor could be spread away from each other, but the place could still have enough people to make it all work. Masks were worn by the waiters, but once one sat down, you were safely far away enough from the other customers that you could take your mask off for the duration of the show. Even the bill could be paid touchless, a QR code right on the receipt.

And everyone was excited for live music again – very much including Rhett Miller himself. Alone on stage with just a few guitars, Miller more than once remarked upon how long & how strange it had been. “Haven’t played standing up in 14 months,” as he had been doing livestreams four days a week, just playing to “a camera and my dog Ziggy.” He mentioned getting interviewed by none other than the New York Times about the gig, the interviewer saying it was the first ticketed show in New York City since the pandemic [on Twitter, someone pointed out to QRO that The Shed did a ticketed show on Friday]. This had shocked Miller, as he self-effacingly felt that it wasn’t right that he would be the return. He also did the more usual stage banter that you’d forgotten how much you missed, such as talking about giving his 70-something mother in Texas a subscription to the Times (and how 70-something Texans need all the good journalism they can get…) and the weird difference in his mind between the ‘gigs’ he was used to and his highbrow idea of what a ‘concert’ is (yet playing in his basement was labeled a ‘concert’; he also talked about this to QRO last year – QRO interview).

In those 14 months away from the stage, the Old 97’s put out the great Twelfth (QRO review), and he played pieces from it such as “Belmont Hotel”, but stretched across his whole career, from solo albums to the track he wrote with Brandi Carlile, “Good With God”. Of particular note was getting to see him shake his long hair, and his whirlwind guitar playing on numbers such as “The Other Shoe”, “Barrier Reef”, and “Champaign, Illinois” (though he missed pointing out the obvious pun of playing “Champaign” in a winery…). For his encore return (something else that’s returned, with Miller noting how nice the backstage at City Winery is, at other places usually having to hang out with rats while waiting to come back), Miller covered Nick Lowe’s ultra-classic, ultra-coverable “(What’s So Funny ‘Bout) Peace, Love, and Understanding”, before bring back something else: the request. When he asked for a request, at first the crowd almost didn’t know what to do, so unused to rhythms of a show, but soon there were many shout-outs, Miller taking what he said was the first one he heard, “Oppenheimer”.

Just as everyone knows what we’ve all been through this last year, everyone at the show knew that the concert felt unusual, from appreciating all the little things (like a lit candle at your table) to still being worried about the pandemic (because COVID has more waves than ska…). But just as the coronavirus has brought people together (at least those who believe in it), everyone at City Winery NYC was brought together in a special way to appreciate Rhett Miller and the return of live music.