The entire night was exactly what you would picture in your head if you tried to image what a Riff Raff show might look like.... 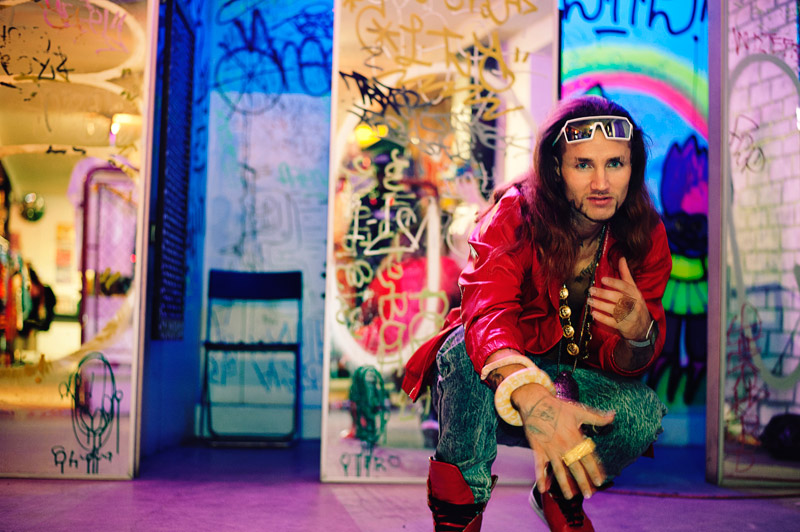 I had only been at Irving plaza for five minutes before I was asked to buy alcohol for a minor. For legal reasons, I shall not disclose whether or not said alcohol was purchased, but I will disclose that said minor was very proud of the crispy white Riff Raff t-shirt she acquired by flashing the guys at the merch booth. How else should you kick off an evening with the Neon Icon?

Monday night, April 21st, Riff Raff played New York’s Irving Plaza (QRO venue review), but before he took the stage, a healthy number of brightly-colored, cargo or booty shorts-clad, red bull & vodka-gulping concertgoers packed into the venue with the expressed goal of getting as turnt as possible on a Monday night. They succeeded. It was as though we had been transported to Miami Beach for just one night.

There was one opener on the bill, Grandtheft, who played a predictable mix of spring break bangers. It was exactly what the brogasm of a crowd wanted, and despite their stir of experience with this type of situation, it was clear that some of the guest had popped their molly’s a bit too soon. Now they were sweating, and Riff Raff was still an hour or more from taking the stage. Woo, indeed.

If distance makes the heart grow fonder, than our hearts were full of fondness for Riff by the time he actually took the stage. About 30 minutes after the opener vacated the stage for Riff Raff’s DJ, and after about 14 proclamations of “Y’ALL READY FOR RIFF RAFF!” later, the DJ excitedly informed us that the he had just received word that the Neon Icon had finally arrived at Irving Plaza. It would be another 30 minutes before he would arrive on the stage.

But when he did arrive, he did it in typical Jody Highroller fashion, backed by five hype-men. Riff wore a blue tank top covered in bananas, large designer shades, and in place of the traditional hand held mic, he opted for a headset. Britney Spears used one so she can dance without giving away that she’s lip-syncing – Riff Raff does it so he can stand still and not give away that he’s lip-syncing.

He played with a track that still included his vocals, rapping over them when he wanted to, or hiding behind the massive cardboard cut outs of his own face, his dog Jody Husky, a blue-haired visage of Katy Perry, and a giant rendering of the Neon Icon album cover. There was a strange disconnect between Riff and the audience, as if he was reluctant to admit our existence. He did the required hand slaps and fist bumps with the front row, but that just about rounded out any audience interaction.

Most of Riff Raff’s most notable and popular verses come as features on other artists’ tracks, so the beat often hops in the middle of songs, just long enough for Riff to spit his verse, then the vinyl comes to a halt, sometimes abandoning songs mid-chorus because Riff’s section had come to an end.

The entire night was exactly what you would picture in your head if you tried to image what a Riff Raff show might look like. Loud, ridiculous, sloppy, unbelievable, and altogether exactly the type of show the Neon Icon should produce. What did we expect? An introspective journey through the psyche of Jody Highroller? Turn down for what?