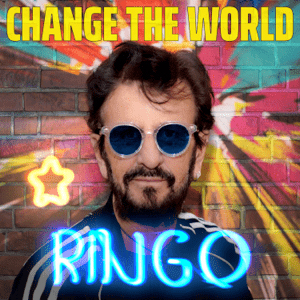 Ringo Starr holds a unique place in the world of pop music (or even just in the world in general), having been in the greatest band ever, but so universally considered its weakest member that ‘the Ringo’ has become a colloquialism for a weak link in a strong chain. He’s nobody’s favorite Beatle (Marge Simpson aside), but he’s also the most likable (such as replying to Mrs. Simpson’s fan letter, albeit a bit late…). On Beatles records, he would get to sing one song per album, and only lead wrote a few in the band’s history. But one of those was “Octopus’s Garden”. It’s like he knows that everyone in the world likes him, but he doesn’t try to push it. Thus, another cheery, if limited EP, Change the World.

Click here for photos of Ringo Starr & His All-Starr Band at Ryman Auditorium in Nashville, TN on August 7th, 2019

Click here for photos of Ringo Starr & His All-Starr Band at Iowa State University in Ames, IA on September 5th, 2018

Click here for QRO’s review of Ringo Starr & His All-Starr Band at DCU Center in Worchester, MA on June 11th, 2016

At just four songs, even one less than the Zoom In EP (QRO review) from earlier this year, Change is a quick Starr burst. “Let’s Change the World” is the cheery hope that if anyone’s gonna do, it should be Ringo. “Just That Way” is relaxed reggae, enjoyable and limited in its own reggae way. “Coming Undone” is some nicer throwback cheer-pop that The Beatles did so well. And if you’re gonna hear someone cover foundational classic “Rock Around the Clock”, it should be Ringo.

Change the World EP doesn’t change the world, or even slightly shift anything, but you’re not looking for that from Ringo Starr. We all just want Ringo to be Ringo, and at that, he’s a Starr.