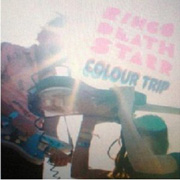 Tried so very hard with this review of Ringo Deathstarr’s Colour Trip to stay away from the repetitive similar themes churned out in other accounts.  You see, the debut album from these Texans sounds just like… The Jesus and Mary Chain, My Bloody Valentine, Slowdive, Chapterhouse, Ride, shoegaze… shoegaze… geraniums!

But why feel the need to apologise!  This is a great album that fans of the above will love; it’s a great listen.  However, where as with some of ‘shoegaze’ bands the fuzz and distortion blend into one, with a predictable lack of variety throughout, where as Colour Trip is different.  Instead Ringo Deathstarr appear to be leading us through the who’s-who of the ‘80s shoegaze/psychedelia movement and the variety that can be found across all those bands, is evident and reproduced on this album.  It works brilliantly, surely demanding that Colour Trip end up being a favourite release of the year for many.

There are guitars a-plenty, saturated, drenched in reverb and effects.  The drifting hazy vocals of Frazier and Gehring coated with lashings of drums from Coborn to blend into a thick mass wall of sound that demands to be played very loud.  The pounding begins with opening track "Imagine Hearts", which starts like a Sleigh Bells (QRO photos) track (similarity ends there!) before drifting into something far more beautiful with Gehring automatically pulling in the My Bloody Valentine comparisons.

The album also offers a catchy mix of pop melody with the galloping "Do It Every Time".  A wonderful track from Colour Trip earmarked by Frazier’s deep tone drones (see Jim Reid) and Gehring enveloping backing vocals lifting the tune to new highs fuelled by Coborn’s rapid thumping percussion.  "So High" zips along at knots and is an altogether cleaner jangly guitar sing-along tune, far more in the frame of the late ‘80s band from Coventry, England The Primitives.

Next Ringo lead us into "Two Girls", which nods towards Slowdive, and if you have not seen the video for this song you really should!  The Mickey Mouse ears and all.  But back to the song… it’s great, but worth playing alongside the video.  "Kaleidoscope" moves steadily along and witnesses Frazier cloudy whispering vocals buried below the rhythm section of Coborn’s thudding drums and Alex Gehring’s distorted throbbing pounding bass.

"Day Dreamy" does what it says on the tin.  Imagine having a rough old late night where you had been to a rave at a small obscure festival all night long.  During the evening you had taken a heap load of mind enhancing drugs.  In the morning you step away from the dance tent into the dazzling summer sun and find yourself collapsing in a golden field of corn.  Lying flat on your back, unable to lift a limb, staring up at the glistening bright blue sky… your mind would be composing "Day Dreamy" without question!

However, if your night at the dance tent had involved knocking back tequila, whiskey, vodka etc., etc., then your mind more than likely would have been composing something more like the next track.  "Tambourine Girl" begins with its growling guitars, before Coborn’s drumbeats propel with a sudden head rush that suggests we need to make a sink quick!  A mad rush of a song, which at a Ringo gig must surely involve those at the front getting crushed against the crash barriers.

The Cure have been around for generations and during that time, they have written some rubbish, and then on other occasions they have created masterpieces like their Faith album.  "Chloe" begins like an overture to one of the songs from this album.  The composition oozes backwards and forwards, as Frazier pushes forward with his vocals and his guitar effects pedals create a spiralling psychedelic montage of a blanket, that eventually envelopes the listener before smothering them.

"Never Drive" moves along like a rough unpolished stone, which could have come from a long lost early Jesus and the Mary Chain song that hadn’t made the light of day.  Similarly, "You Don’t Listen" follows on a similar level where you can pick up a mental picture drummer Daniel Coborn stood above a couple of floor tom toms beating the hell out of them with a large stick, just as JAMC did in the "Happy When It Rains" video.

Colour Trip ends with a gentle farewell lead by Gehring vocals.  The track is so fragile and gentle that there is even room for the sound of wooden percussion accessories being clonking away.

The album is full of soaring, distorted riffs and slamming percussion that demand some serious amplification.  Clearly Austin, Texas is the home of breeding some really creative and inventive noisy guitar based bands at present – The Black Angels (QRO album review) being another.  The Deathstarr have done the rounds with fellow ‘gazers’ in A Place To Bury Strangers (QRO spotlight on), Dandy Warhols (QRO album review), and even supporting The Wedding Present across the U.K. (QRO live review from that tour).

It’s now time for these fledglings to spread their wings to create their own history and become an influential band to those shoegaze bands of the future.

MP3 Stream: "Do It Every Time"