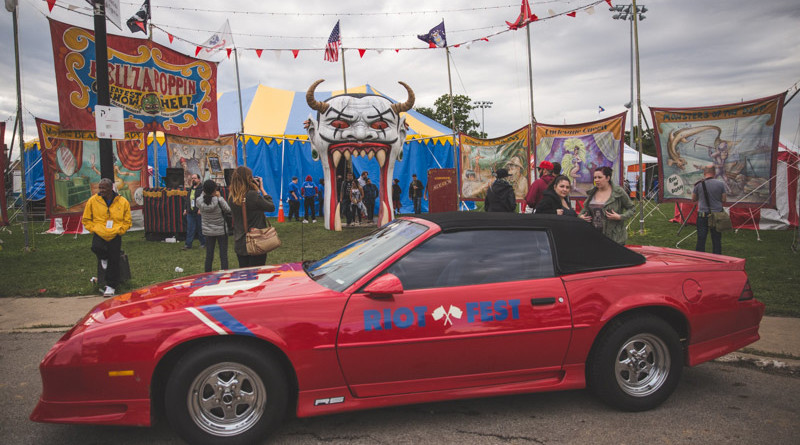 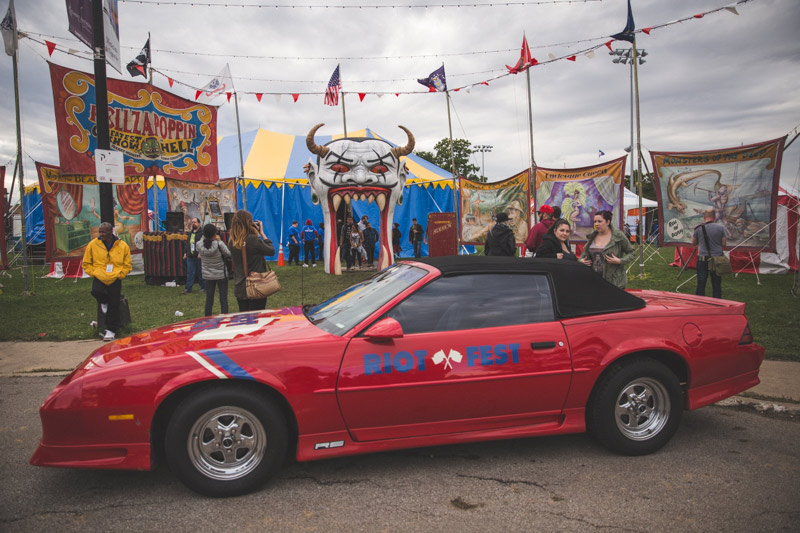 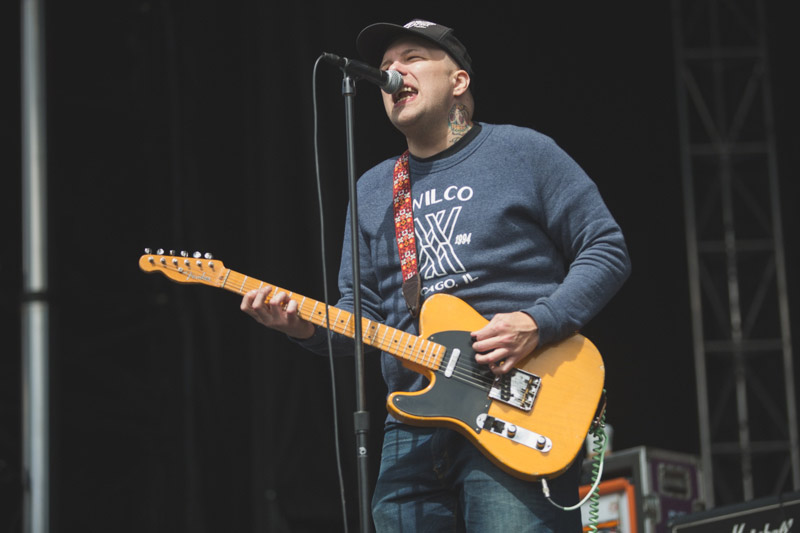 More morning rain meant more muddy ground on Day Two of Riot Fest, but it was ameliorated later on – thankfully, as it was a lot harder to dodge patches of wet mud once the sun went down.

It was suitably wild on Riot Stage & in the crowd for FIDLAR, an act perfect fitting for Riot Fest. They played that always-true “Cheap Beer” (“I! Drink! Cheap! Beer! So! What! Fuck! You!”), and were flanked by what looked like mannequins in suits. There was an extended bass solo on a new song, where singer Zac Carper crowd surfed. 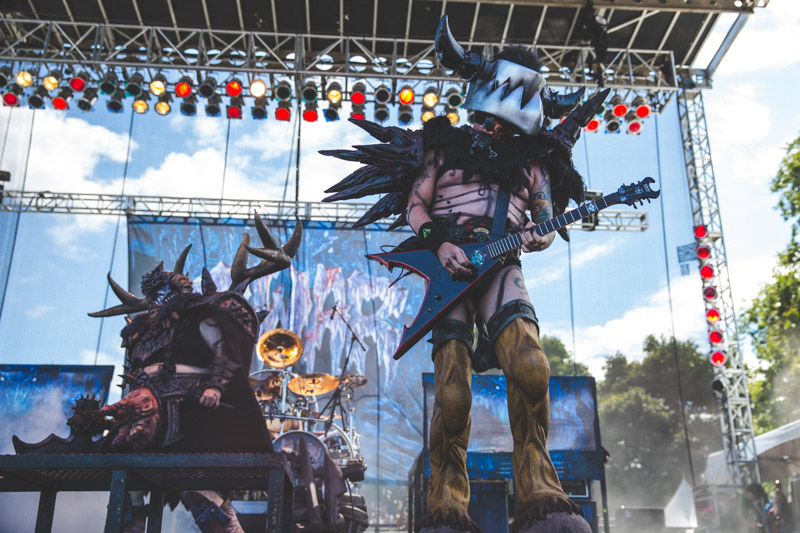 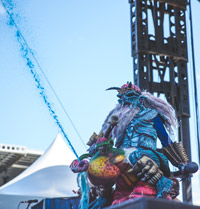 But there is no act more suitable for Riot Fest than the one, the only, GWAR. A Riot Fest regular, the spectacle on Rise Stage included Oderus the Elder, father to late singer Oderus Urungus, coming on stage and attempting to claim GWAR for himself in inheritance – he then pissed blue onto the crowd, and was kicked in the nuts in defeat. Was this mocking the band’s actual dispute over the remains of the real Urungus, Dave Brockie (QRO interview), with Brockie’s actual father? Other events included new singer Blothar raping a baby, “Meat Sandwich”, and the group fighting a giant (actual) internet troll, ripping out its single, giant eye. They closed by dedicating the final song to Oderus/Brockie – “Hail Oderus!” 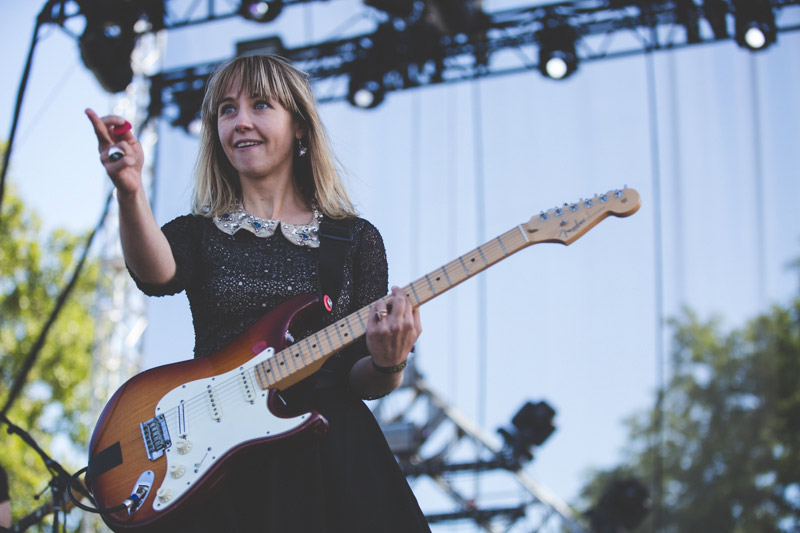 Anyone would seem lower key after that, but The Joy Formidable always bring their energy. Actually, at first the audience at Riot Stage seemed a little lethargic – but who wouldn’t, compared to the energetic trio of Ritzy Brian, Rhydian Dafydd (QRO interview), and Matthew James Thomas. And the crowd did warm up with “Cradle”. The Welsh group also said it was a good day in Britain, praising new Labour leader (who’s decidedly not ‘New Labour’), Jeremy Corbyn, before playing recently revived rarity “The Leopard & The Lung”. 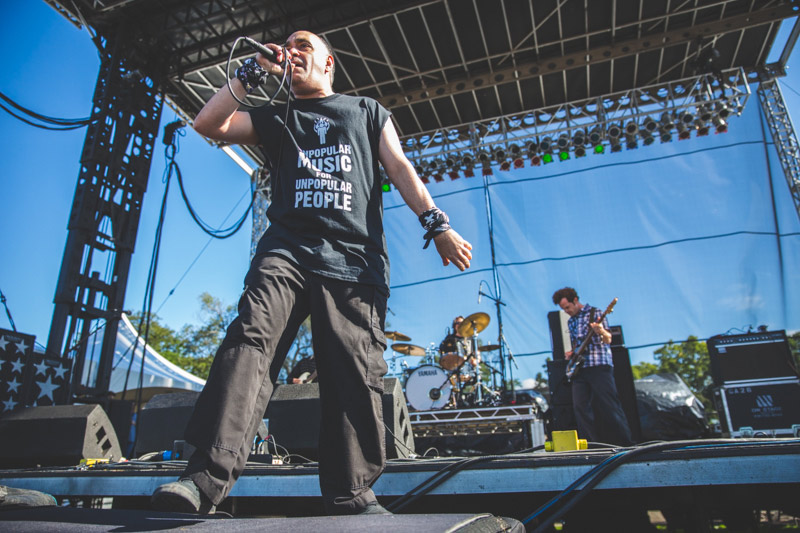 Riot Fest headed into punk icon territory from there. First was The Dead Milkmen on the Rock Stage, who interestingly didn’t wait to play their biggest hit, “Punk Rock Girl”, doing it second on their set list. This year’s reunion of Babes In Toyland came to the Rebel Stage, while The Thurston Moore Band played the Riot Stage. The ex-Sonic Youther (who had fellow SY Steve Shelley on drums) sounded louder, and more metal, but perhaps that was just osmosis from the rest of Riot Fest. 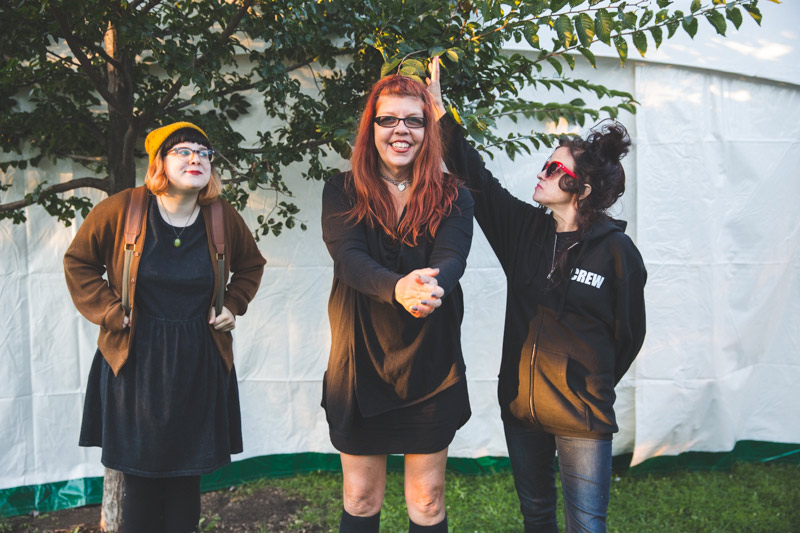 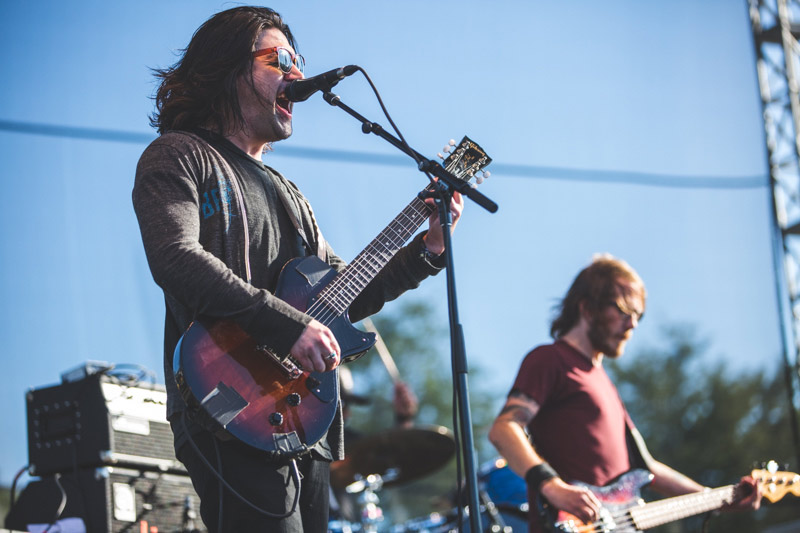 It’s really surprising that Conor Oberst, of the preciously heartfelt artist-your-girlfriend-likes Bright Eyes (QRO live review), not to mention terrible country side (QRO live review) and Monsters of Folk (QRO album review), not only has a punk band, but also has one that’s actually good – Desaparecidos. What’s more is that he’s really into it; he could be making more money doing other things than agit-rocking at Rock Stage. 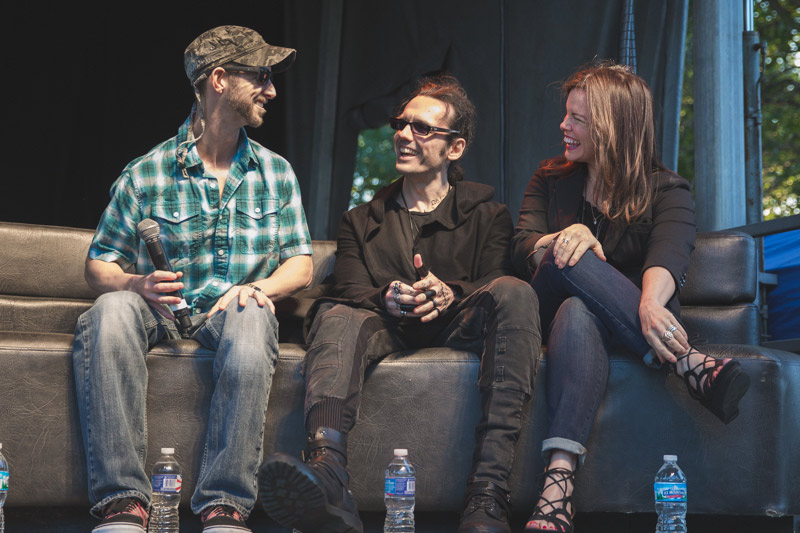 One of the outliers at Riot Fest was Echo & The Bunnymen. A seminal new wave act out of Britain in the eighties, they should have been playing at night, not before 6:00 PM at the Riot Stage, but still were great with classics like opener “Lips Like Sugar”, “Bring On the Dancing Horses”, and of course the much-covered “Killing Moon” (original’s still the best…).

While The Devil Wears Prada fit Riot Fest with their screamo sound on the Roots Stage, an even bigger outlier was Bootsy Collins’ Rubber Band. The member of Parliament/Funkadelic and Deee-Lite, it was a funk parté at Rock Stage, including “Brick House”. 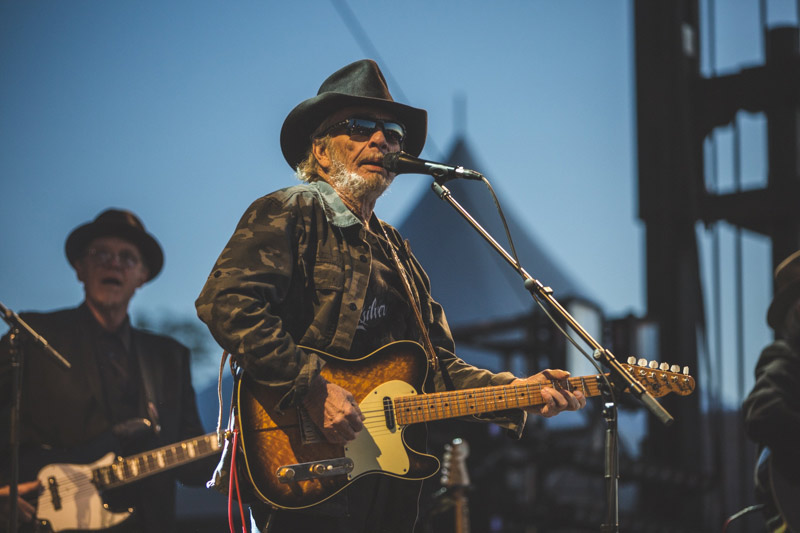 Finishing up with the out-of-genre surprises on Day Two was Merle Haggard on the Riot Stage. But how can anyone not enjoy some outlaw country like “Tonight, the Bottle Let Me Down”? Meanwhile on the Roots Stage, The Academy Is… played their emo Almost Here in what was billed as a final performance by the band, but after Riot Fest they announced an Almost Here tour. Your twenty-something girlfriend will be happy. 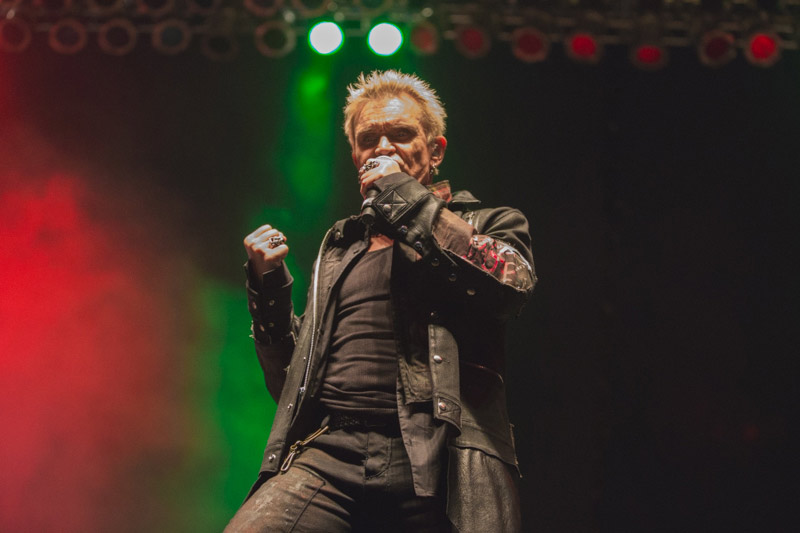 Like Day One, Riot Fest was topped with some conflicts. First was Rancid on the Rise Stage vs. Billy Idol on the Rock Stage. However, Rancid’s return to Riot Fest (QRO photos at Riot ’13) was to play the twentieth anniversary of punk hit record …And Out Come the Wolves, so you knew where on the set list they were going to play hit singles “Roots Radical” and “Time Bomb”, third and fourth. That enabled one to then head over to Billy Idol to catch him close with his own, even older hits, “Rebel Yell”, “White Wedding”, and “Mony Mony”. 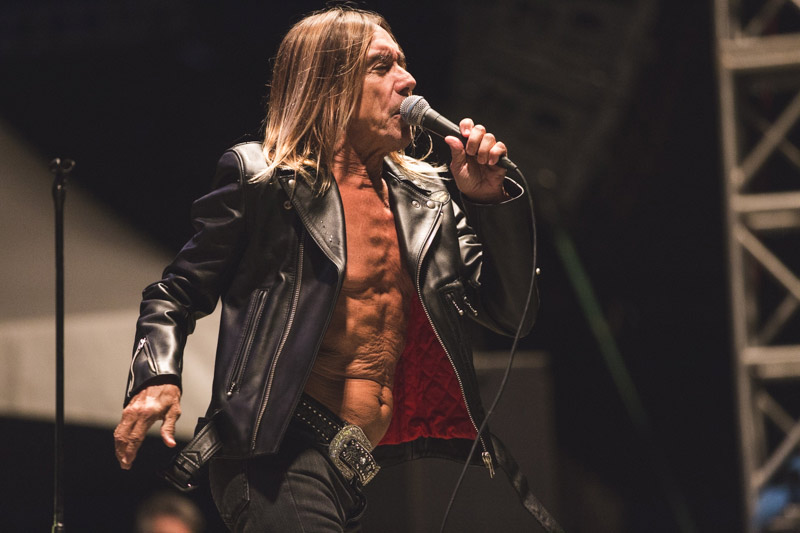 Saturday night ended with System of a Down on Riot Stage vs. Iggy Pop on Rebel Stage. Iggy Pop is obviously the bigger icon, but this wasn’t billed as with The Stooges, and we’ve all seen him without his shirt on by this point. But there was chaos over at System of a Down. Even before the show started, fans of the alt-metal headliners were climbing the barrier into the photo pit, forcing security to prohibit photographers. This was a rare show by the band, and the crowd was psyched, but multiple times during the performance the group had to stop to enable security and EMTs to help people who were getting crushed and trampled. “We love playing these shows, but it’s not worth one person getting hurt singer,” Serj Tankian said at one point. But despite the stoppages, the show did always, eventually, go on.