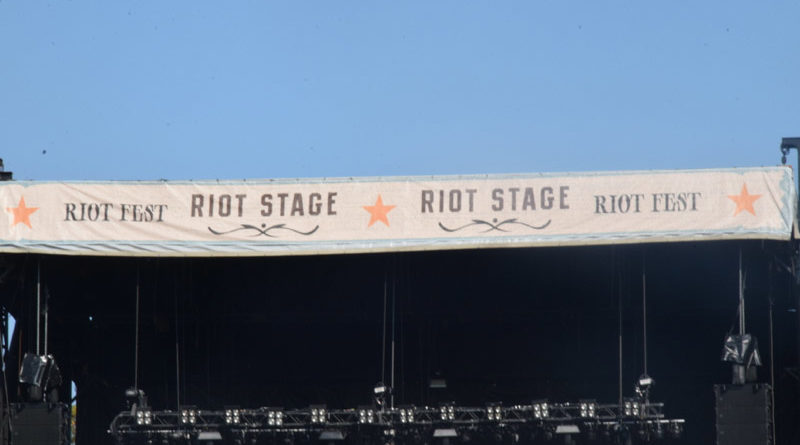 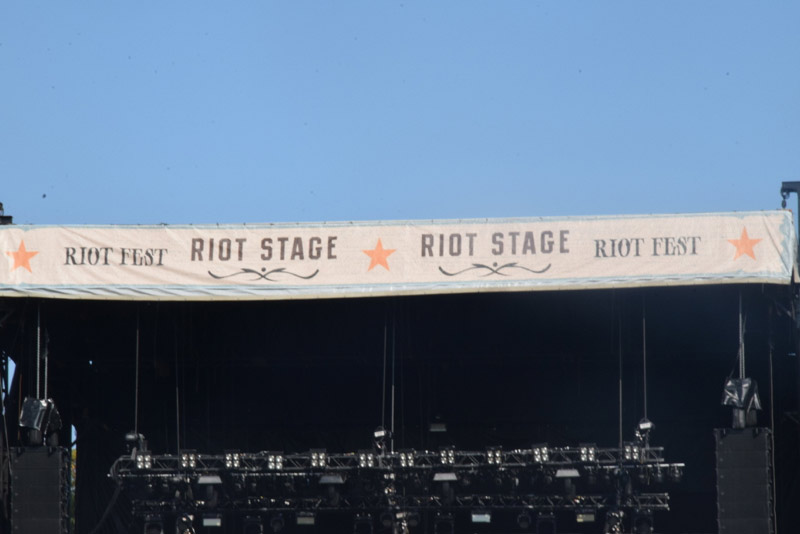 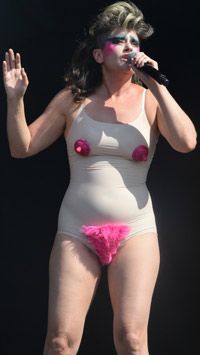 A major sight at Riot Fest ’17, perhaps the most major, was Peaches on the Riot Stage early. Indeed, it was surprising to see an artist as well known as Peaches playing so early, but maybe it was because she needed the time for her stage and costume changes. And boy, were there costumes! She opened up wearing an enormous pink fur ensemble, with dancers in body suits dressed as dancing vaginas. Later Peaches removed her fur for a comical naked suit, and proceeded to ride a member of security’s shoulders so she could stand on the photo barrier. “Jesus walked on water; Peaches walks on you.” The new wave feminist icon wasn’t just show, with songs like “Talk To Me” and “Boys Wanna Be Her”, now immortalized as the theme song for the Full Frontal with Samantha Bee. 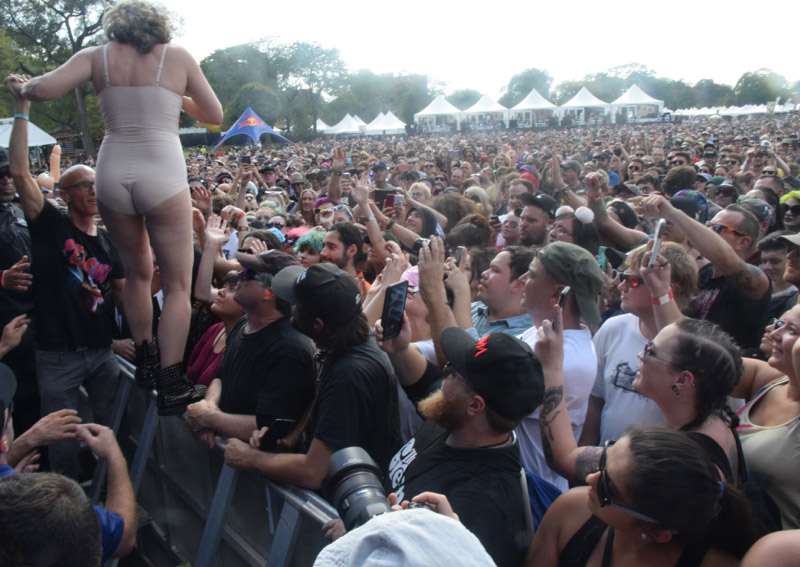 After the ultra-aggressive noise-metal of super-group Dead Cross on the Roots Stage, the next-door Riot Stage had the suitably wild young punks FIDLAR. Opening with a cover of Beastie Boys’ “Sabotage” (which they’ve been doing regularly, and not just this time because Boy Mike D was playing – see below), FIDLAR felt like what every young Riot Fest attendee wish that they could do on stage at Riot Fest. “I drink / Cheap beer / So what? / Fuck you!” 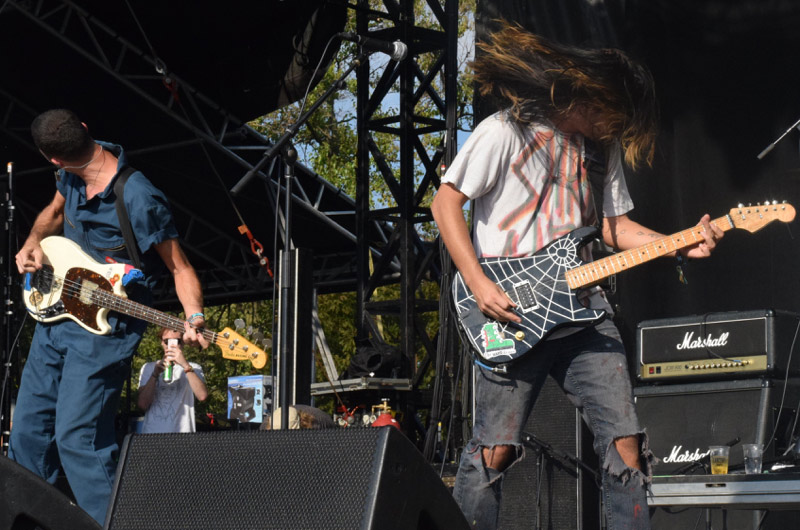 While the Rise Stage was the hip-hop stage on Friday, it was the Radicals Stage on Saturday that was the afro-punk one, with acts like Fishbone (doing classic Truth and Soul album in full) and Bad Brains (one wonders what they & other acts on the stage thought of the first artist, two white British boys who call themselves ‘Slaves’…). Like X and Buzzcocks on Day One, Bad Brains are one of those classic acts that you’ve always meant to see, and Riot Fest provided the opportunity for their mix of punk and jah. 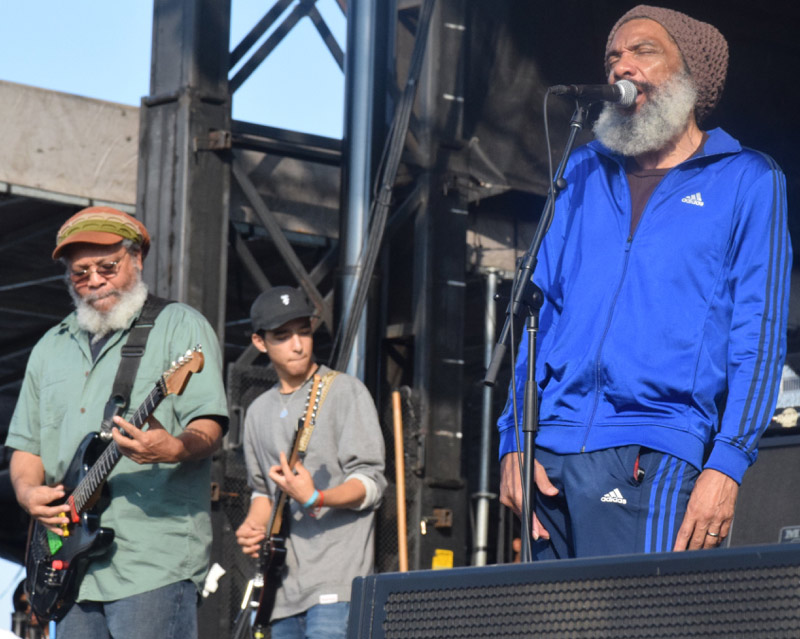 At Riot Fest ’16, the absolute biggest event was the reunion of The Misfits, playing one of only two reunion dates (and the other was at Riot Fest Denver). So singer Glenn Danzig ‘just’ doing his post-Misfits solo act couldn’t help but feel like a comedown, particularly under the hot, beating sun that he referenced more than once. While it was nice to hear Danzig III: How the Gods Kill in full (save for “Sistinas”, which Danzig mentioned needed an orchestra to do) in different conditions, perhaps Mr. Danzig should have taken this year off from Riot Fest.

[note: One thing was similar about Danzig – he once again didn’t allow any photographers, because he’s definitely gotten older…]

Special mention needs to be made of The Lawrence Arms, who played Rise Stage the same time as the prickly Glenn, and announced, “Hi, we’re Danzig!” The Rise Stage was right next to the ‘Riot Feast’ food stalls, all located in the northeast corner of the festival, which developed some serious lines despite the many, many foods/stalls on offer (particularly at those that accepted credit cards, as opposed to the less fancy-pants ones…). 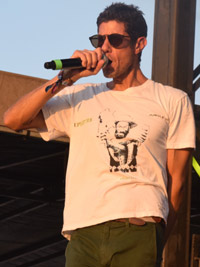 When one saw that Mike D of The Beastie Boys was playing the Radicals Stage, you pretty much had to check it out, but hopefully didn’t have high expectations. Yes, it was the living legend of the group that you’re never gonna get to see any more (after the sad too-young death of fellow Boy MCA). “So What Cha Want” Riot Fest? D sang that song, but over a backing track from his DJ, and mostly sang other people’s material, including Kanye West. The crowd seemed happy, but it was mostly just for the chance to see Mike D, as opposed to for the actual performance. 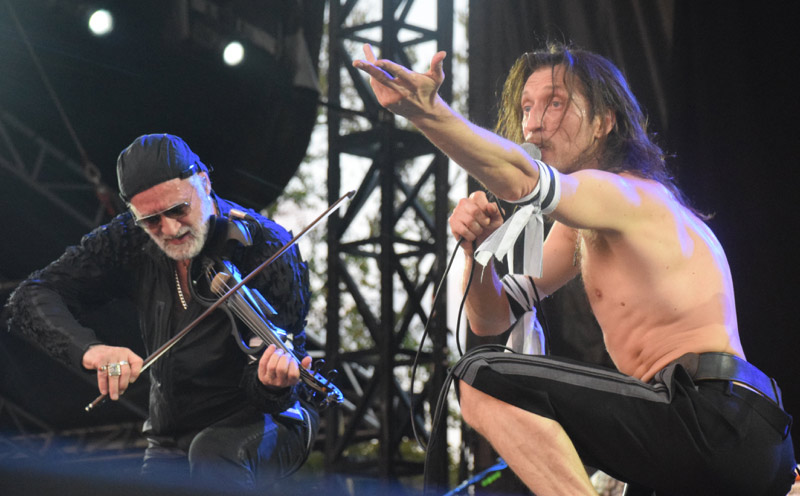 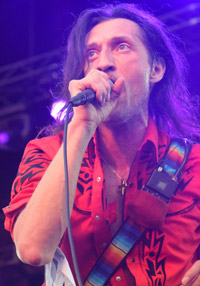 Giving a full on ‘actual performance’ was Gogol Bordello on the Rise Stage. The self-described ‘gypsy-punks’ are a perfect fit for Riot Fest (QRO photos at Riot Fest ‘14), wild artists bringing out the wildness of the crowd. Frontman Eugene Hutz climbed on speakers many times, shedding his shirt early in dramatic fashion, but it should be noted that the other members are no shrinking violets – witness Pasha Newmer rock his accordion. Also should be noted is their politics, particularly their pro-immigrant stance in this era of DACA repeal. Gogol Bordello were not obvious, nor self-righteous, like so much political music, but just made their beliefs an essential part of their identity (kind of like being an actual immigrant). One definitely hopes that the mostly white crowd took the message to hear, along with the music. 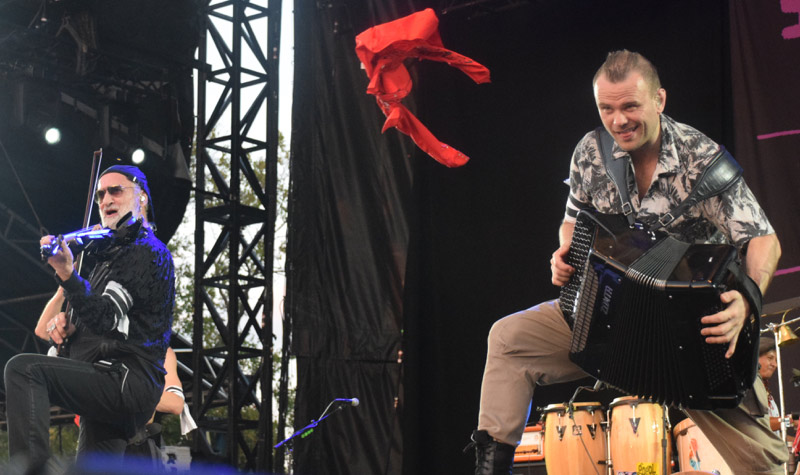 As the sun began to set, the bigger acts came to the fore. At the Drive-In’s reunion brought them to the Roots Stage behind their new record in•ter a•li•a. The reunion seemed shaky after guitarist Jim Ward left it, and reactions to in•ter a•li•a have been divided. Their Riot Fest set, which was almost entirely in•ter a•li•a and final pre-break-up Relationship of Command, definitely showcased their unique hard & weird sound, though when removed from those up close, the weird and hard mushed together a bit into noise.

[note: or maybe your correspondent was just ticked off that the publicist for At the Drive-In & Queens of the Stone Age didn’t approve him to photograph…]

Headlining the Radicals Stage was the group you know are nothing to fuck with, Wu-Tang Clan. While the legendary hip-hop (super)group has played Riot Fest before (QRO photos at Riot ‘14), for this go they were playing classic Enter the Wu-Tang (36 Chambers) in full (note: not the single record that recently convicted & imprisoned pharma bro Martin Shkreli bought…). It was a high-demand performance, which seemed to somewhat overwhelm the already-taxed Riot Fest security. The VIP section in front of the stage (a new addition this year) had its flimsy metal barriers straining as people wanted to see the Wu up close and personal (plus those entourage members in the photo pit, which caused security to close it completely…)

Queens of the Stone Age headlining Saturday at the Riot Stage made complete sense. Particularly coming after Nine Inch Nails on Friday and with their new Villains (QRO review) just out, they’re a totally appropriate & professional act to cap Day Two. Josh Homme & co. gave enough rock and mainstream appeal to be enjoyed by the wide crowd at Riot Fest, while Homme mentioned being excited to see his heroes GBH open the Riot Stage eight-plus hours earlier. It might not have been as special as the emotional Nine Inch Nails the day before or the surprise Jawbreaker reunion the day after, but it was the full Queens of the Stone Age experience (minus an encore – QOTSA ended before the 10:00 PM curfew, but did not return for what seemed like the perfect, even required, place for an encore, distinctly disappointing the crowd).