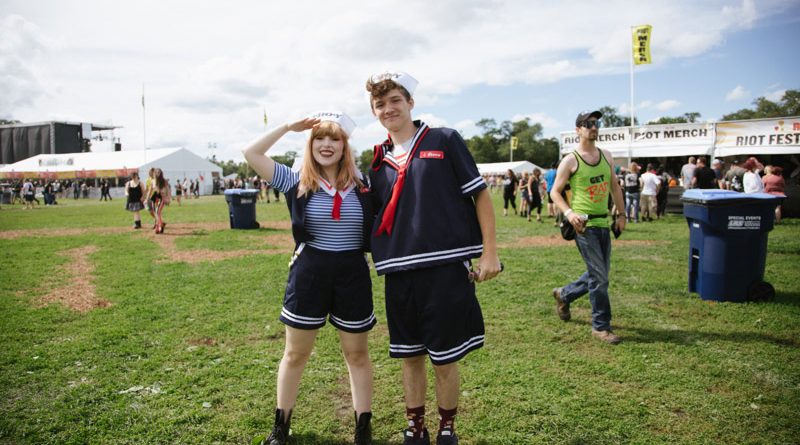 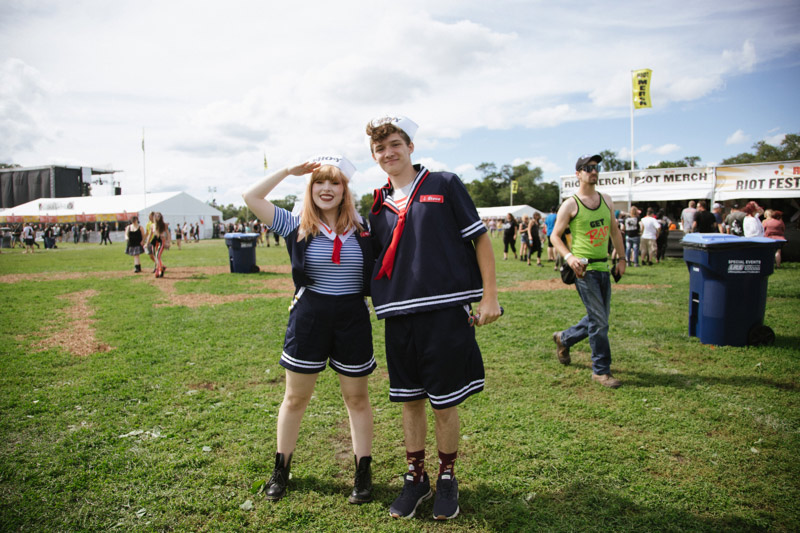 While it rained in the morning of Day One, thankfully it had let up, and hadn’t been that heavy, meaning that the ground wasn’t muddy while the sun shone down. And it wasn’t too hot, either, with the Windy City living up to its name. 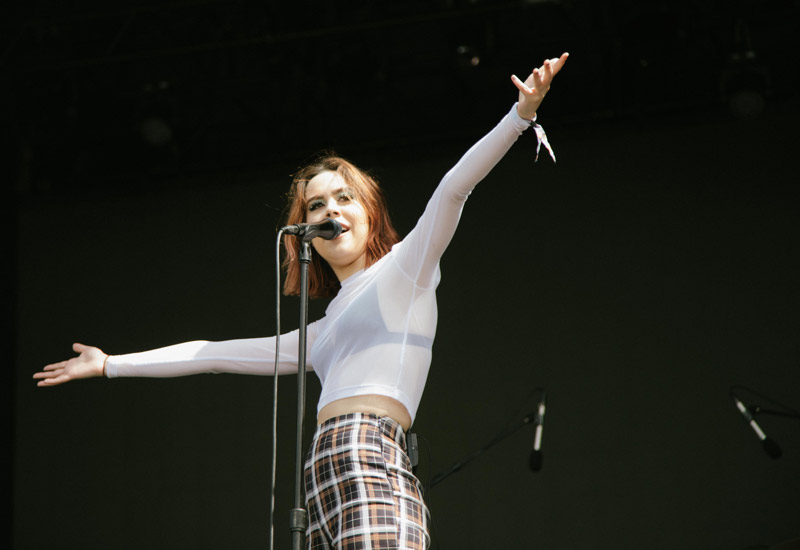 Of course it was young punks who opened up Riot Fest, with The Garden on the Roots Stage, and then the snottier emo-punks Yours Truly at the Riot Stage, “All the way from Sydney, Australia.” People may say that rock is dead, but punk isn’t, as there are still a steady stream of kids who want to put their fists up (without Jersey Shore fist-pumping). 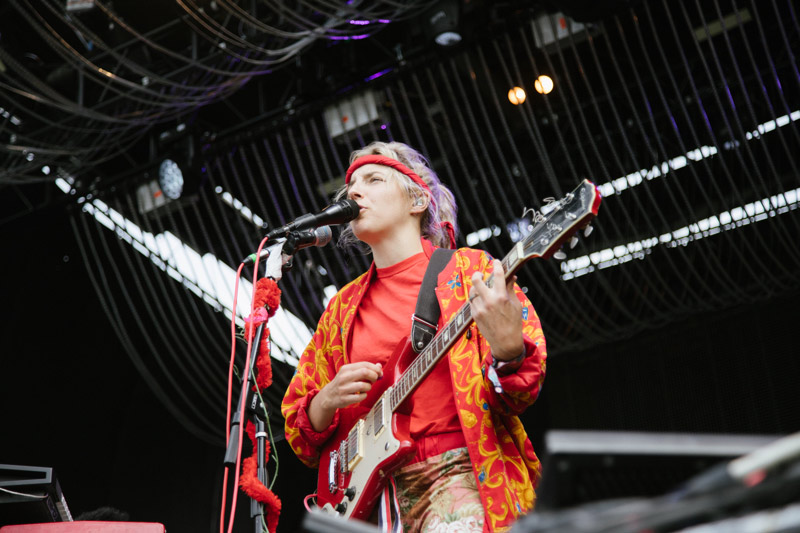 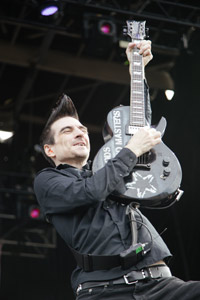 But Riot Fest is also about the old with the young. Though one wouldn’t call Anti-Flag ‘old,’ they have been making political songs since the nineties, and have only more material to work with these days (unfortunately). While they were at the Radicals Stage, the newer Caroline Rose played the Roots Stage. She had once been country, now is nicely rocking, catchy and fun without being just catchy and fun, a charming frontwoman. 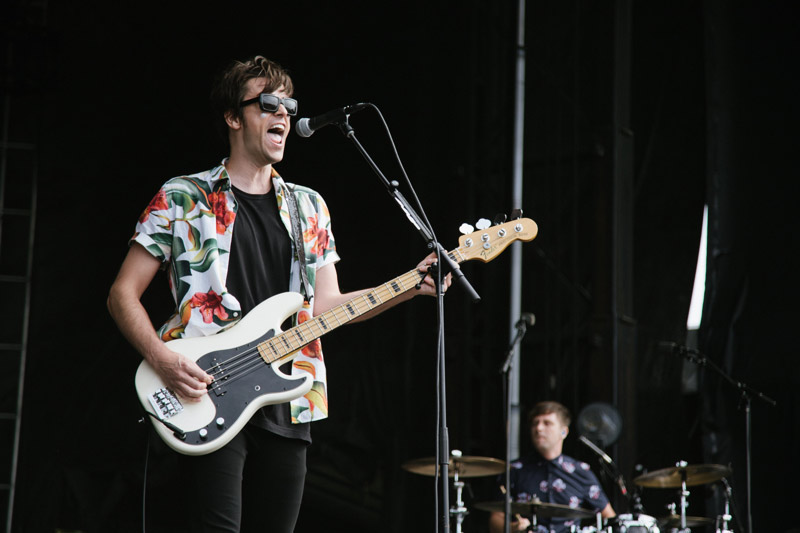 Another rising act was I Don’t Know How But They Found Me on the Riot Stage. They opened with a song about being an opening band, and even covered Beck’s funky “Debra”, showcasing their fun, funkier side, but closing with “Choke”. Singer/bassist Dallon Weekes (of a rare bass-and-drums duo) later remarked that he realized he was dressed like Kiefer Sutherland in Stand By Me. 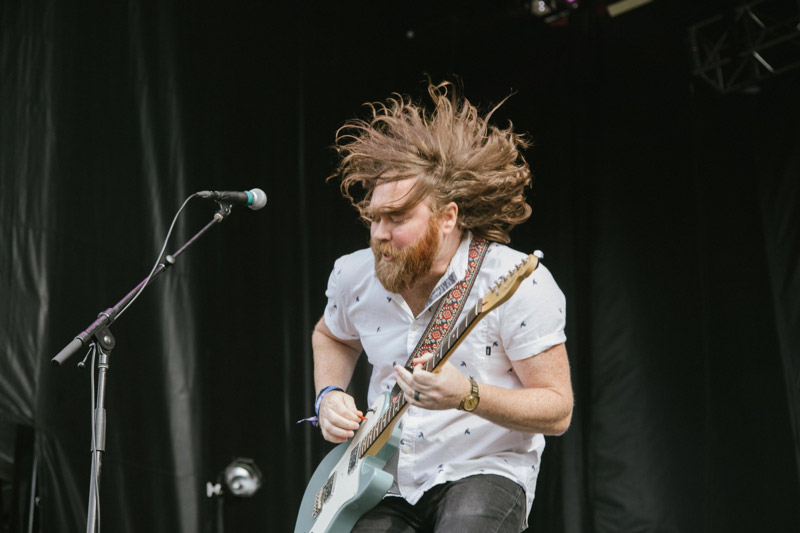 Like the day’s headliner Blink-182, Hot Snakes were supposed to play Riot Fest last year, but made up for it by coming in ’19 to the Roots Stage, with strong, powerful, in-your-face, driving punk rock. Though it was The Get Up Kids, playing one of their first shows without keyboardist James Dewees, who made their “bold claim – I think we got the best stage of the festival” at the Rise Stage, with their exciting, excitable indie-rock for long-time fans. 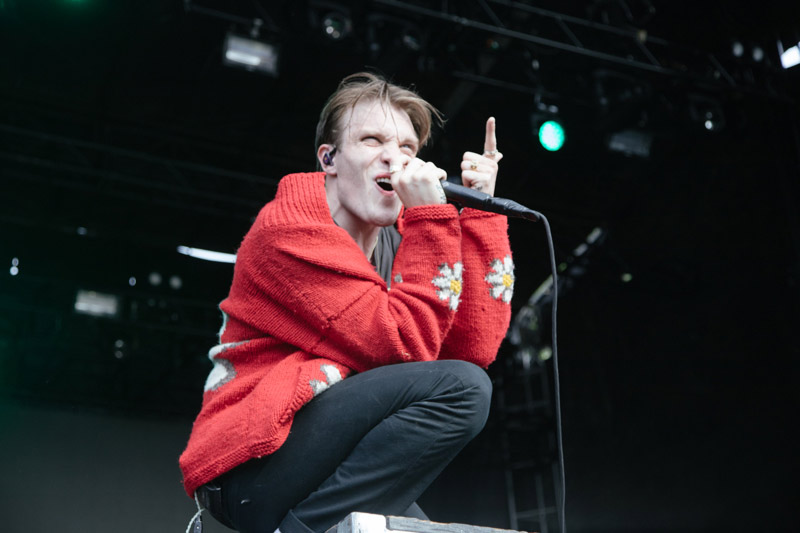 Neck Deep brought enjoyable, if not inspired, emo-punk to the Riot Stage. The opener on the Blink-182/Lil Wayne tour, they even covered Natalie Imbruglia’s “Torn” (last heard when quoted by Ben Stiller as Michael Cohen on Saturday Night Live). 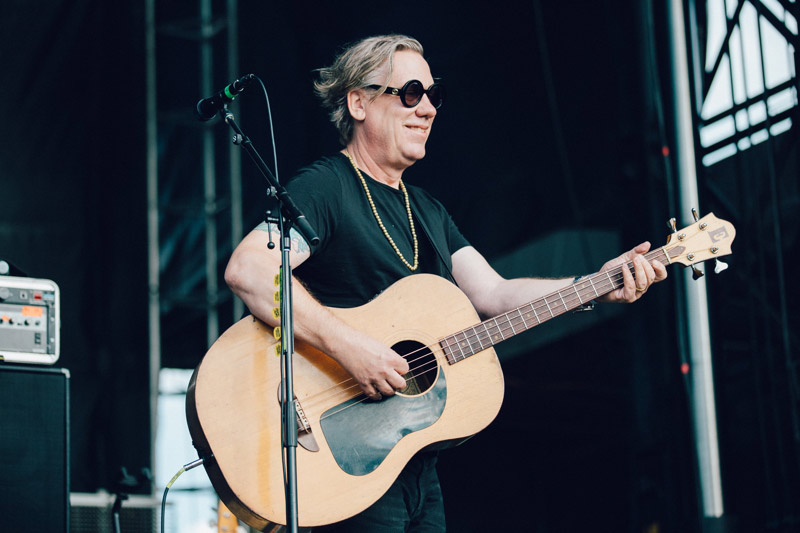 As it got later in the day, the acts got bigger, with bigger back catalogs, like Violent Femmes at the Roots Stage. Admittedly, they’re not the most fascinating band live, and they weren’t loud enough for the big crowd, but that’s acoustic punk for you. And everyone still clapped along to classic “Blister In the Sun”, while the band also fit in their version of “God Bless America” from this year’s Hotel Last Resort (QRO review). Most importantly, while they’ve aged, their sound is as good as on your old records. 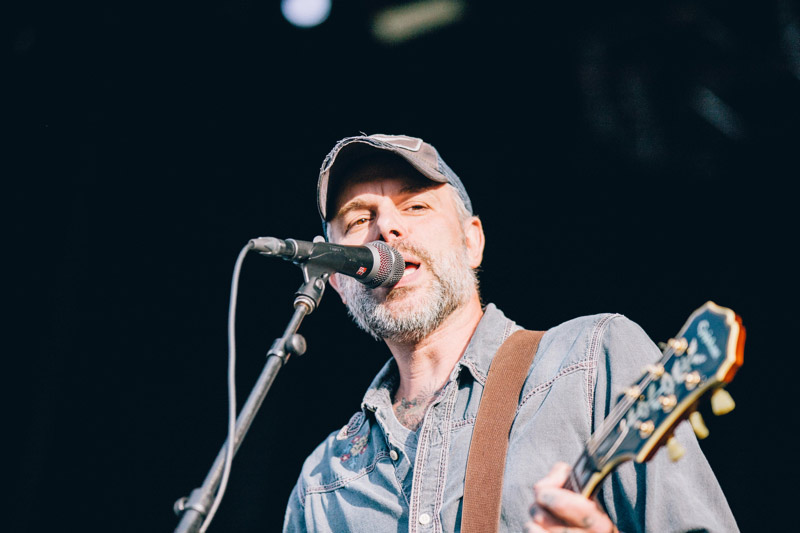 Conflicting with those last two were the cow-punks Lucero on the Rise Stage and the melodic hardcore of Pennywise at the Radicals Stage (do you think they’re pleased or annoyed that the source of their name is back, with the It reboot & sequel)? 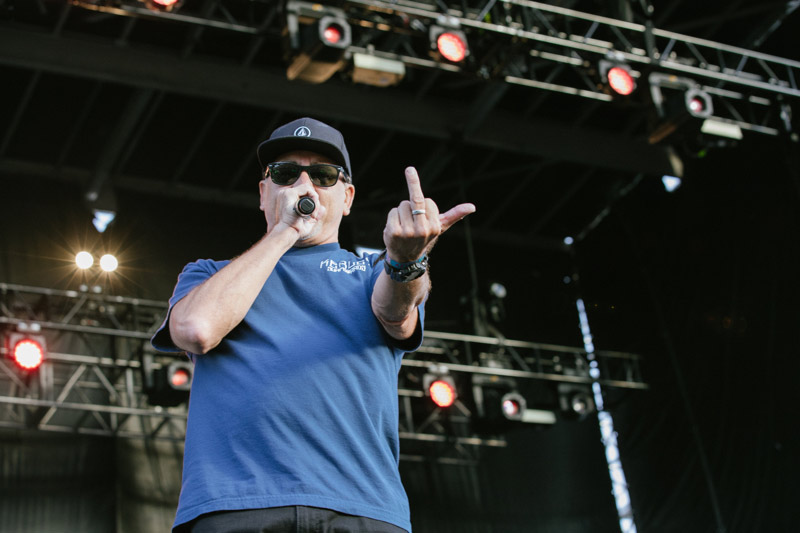 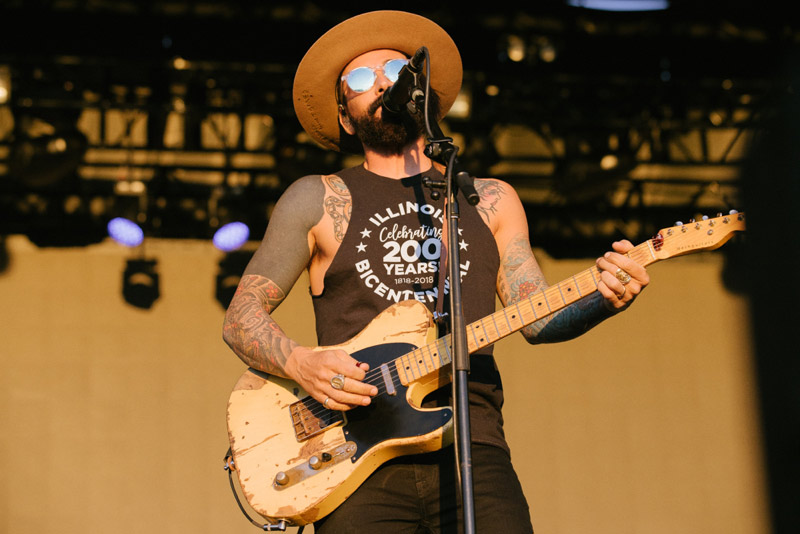 Playing an old, though not as old, album was Dashboard Confessional at the Riot Stage, doing The Places You Have Come to Fear the Most in full – but not in order. Indeed, main man Chris Carrabba started the set solo and acoustic, but not with the first song on Places, the also-acoustic “The Brilliant Dance”. Still, it was actually pretty damn good emo, with everyone singing along, including so many pretty girls that you wish you could or would talk to, but you’re not Chris Carrabba. 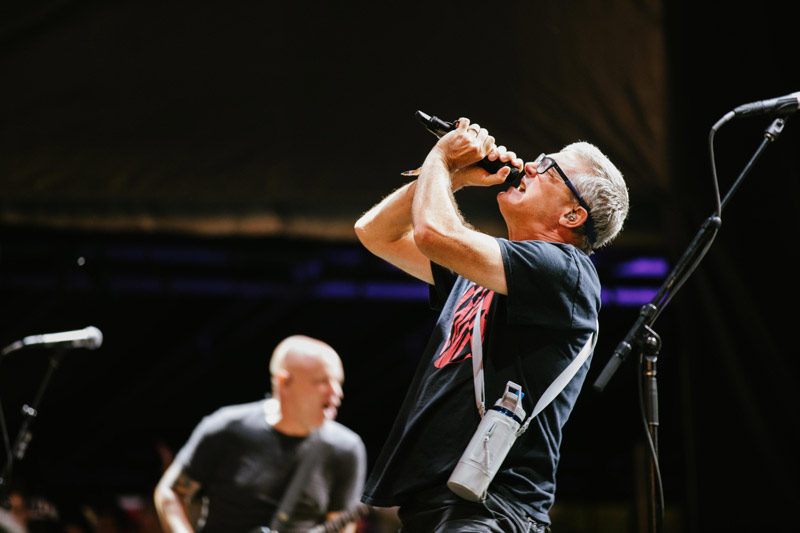 Maybe the most fitting act to play Riot Fest is Descendents. Veteran punks who go back to the eighties Los Angeles scene, with their straight-up music, one could see why they were a go-to, legendary, base-your-music-on band (indeed, Blink-182 would later acknowledge their influence). And they were still wild on the Rise Stage. Bonus points for, during their interview earlier in the day, referencing not just Black Flag (obviously) but the late, great, Minutemen. 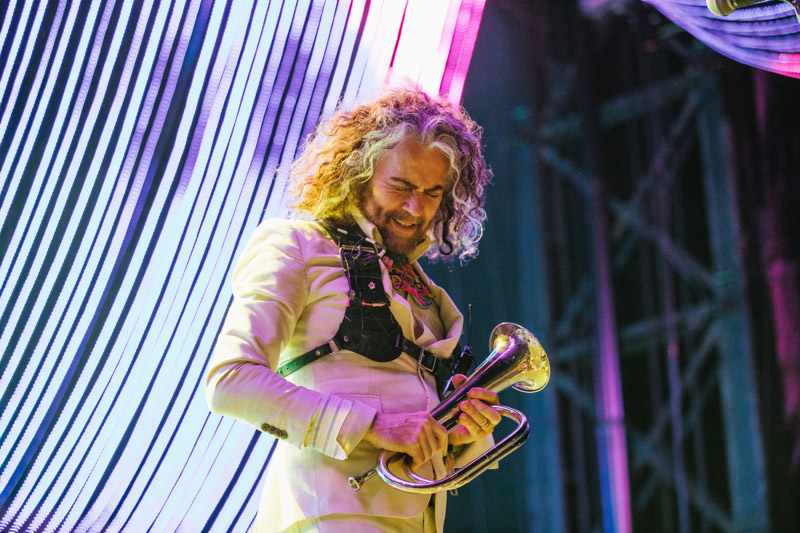 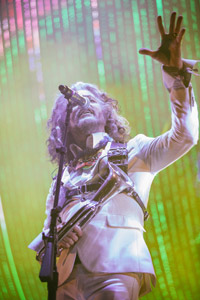 Starting a few minutes early on the Roots Stage were The Flaming Lips, because they’re excited professionals – and not robots. The Lips were playing Yoshimi Battles the Pink Robots in full, which was a great choice of record to do in full. Admittedly, The Soft Bulletin is also a classic (QRO photos of them doing it in full at a festival), and this year’s King’s Mouth (QRO review) one day will be great to do in full, but Yoshimi is more cohesive.

And The Flaming Lips didn’t skimp on the spectacle that they’re known for, with confetti, streamers, and singer Wayne Coyne (QRO interview) going out above the crowd in his plastic bubble. Coyne also paid tribute to the recently past Daniel Johnston, even adding in a cover of Johnston’s “True Love Will Find You In the End” to the Yoshimi-ness. And please believe me, we didn’t let those robots win. 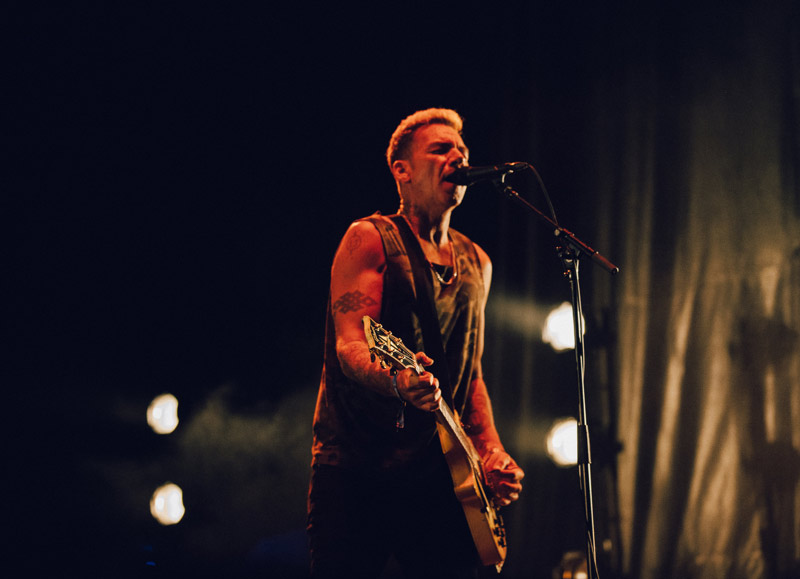 In one of the two greatest conflicts of the night, while The Lips battled pink robots, at the exact same time Rancid were showing Riot Fest what they got at the Radicals Stage. The other great conflict on Day One was Jawbreaker on the Rise Stage up against Blink-182. Jawbreaker couldn’t have been as good as their headlining reunion at Riot Fest two years ago (QRO photos), and Blink were doing the twentieth anniversary of Enema of the State.

Now, this is modern Blink-182, which no longer have singer/bassist Tom DeLonge, instead having recruited Alkaline Trio’s Matt Skiba, doing an album he didn’t make. But DeLonge is off with his Angels & Airwaves and hunting UFOs – during State’s “Aliens Are Real”, fans up front had inflatable little green men bouncing over the crowd. But it was a giant crowd, all the way back to the back bars to hear a record Blink likely won’t be doing in full again any time soon or ever. If you grew up with them, with that album, you had to be happy.