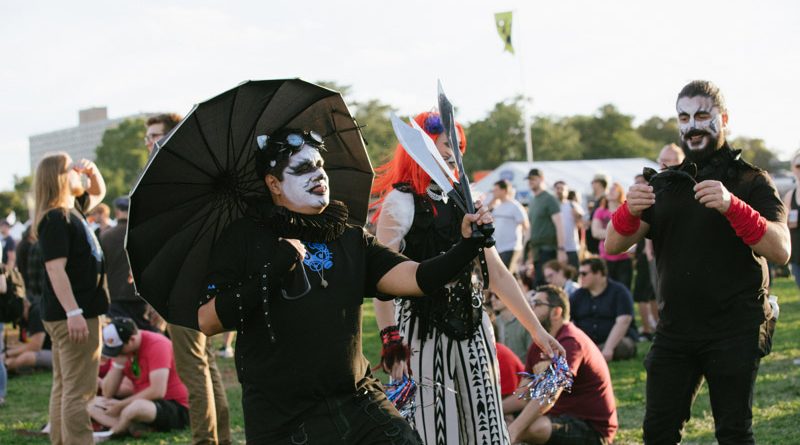 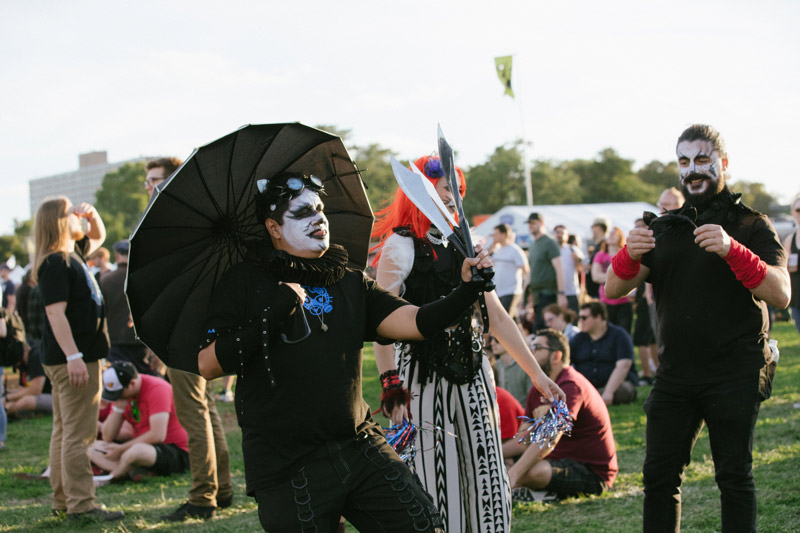 After two intense days, everyone was a little more worn down for the finale of Riot Fest. It was hot, and the ground had taken a beaten, muddier.

And fuck, Ric Ocasek died. The leader of The Cars, he was part of some amazing albums. He also produced the debut album by previous Riot Fest headliner, Weezer (Blue Album) – which Weezer did in full at Riot Fest ‘15 (QRO photos). Ocasek produced some more recent Weezer records, including Everything Will Be Alright In the End (QRO review) – your correspondent saw his tallness buying a drink when Weezer did it in full at an intimate New York show (QRO live review). 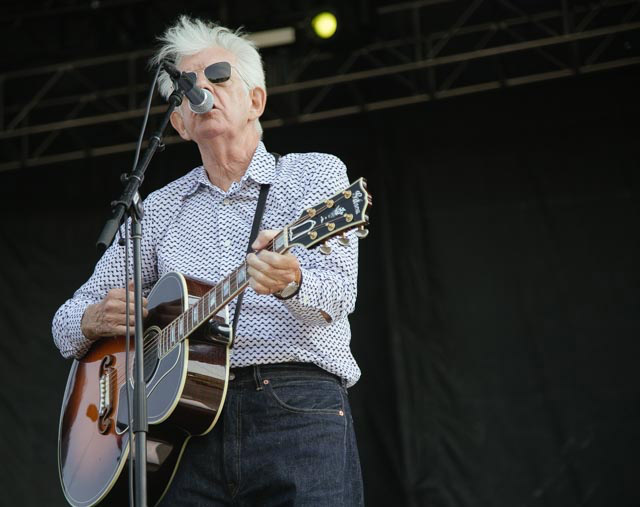 Early on Sunday were some interesting choices for Riot Fest. Nick Lowe is more known for his seventies songwriting – he wrote the piece that Elvis Costello made huge, “(What’s So Funny ‘Bout) Peace, Love, and Understanding” – but more recently he’s teamed up with instrumental surf-rockers Los Straitjackets. While Lowe didn’t have on one of Straitjackets’ trademark Mexican wrestler masks, they were a great fit at the Radicals Stage. 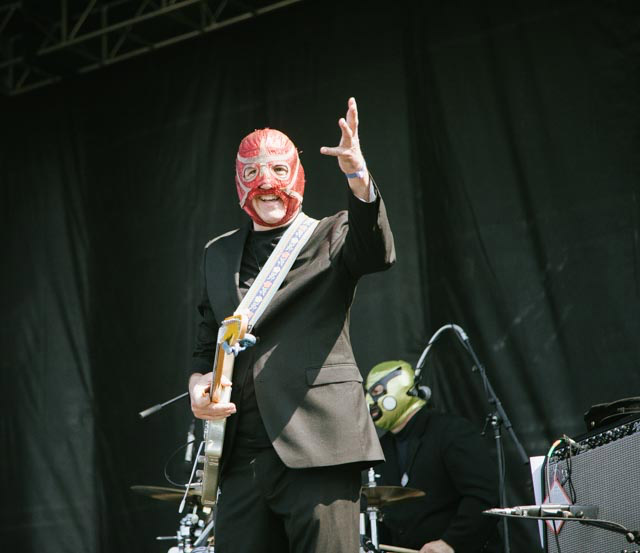 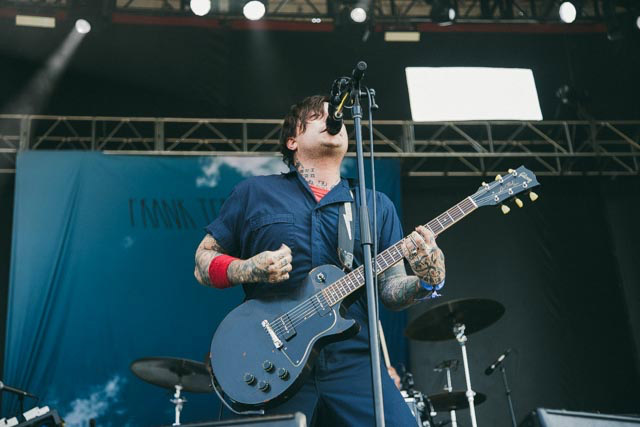 Meanwhile, Frank Iero brought his Future Violents to the Rise Stage. And the rising Beaches rocked under the sunny skies in their Sunday best at the Riot Stage. 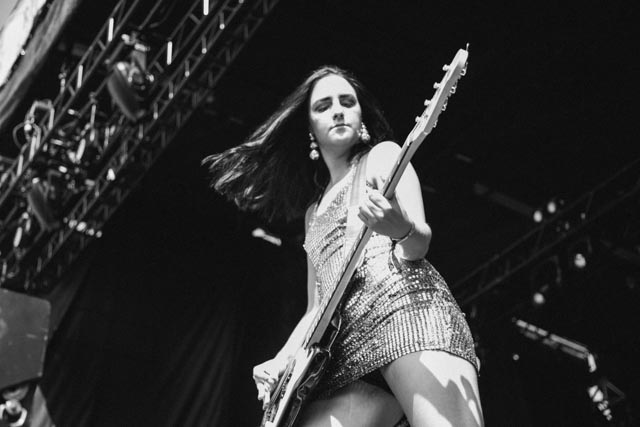 Riot Fest booked The Village People. Many commented that, forty years after Chicago’s infamous ‘Disco Demolition Night’ that saw rockers burn disco records at old Komiskey Park and force the cancellation of the second game of a White Sox double-header (and has been reexamined today in light of the mostly straight white rockers burning records by mostly LGBTQ & people of color musicians), a punk festival booked one of the most iconic disco acts of all time. Yet while there might have been some irony & sarcasm involved, there was a huge crowd at the Radicals Stage for them, because who hasn’t wanted to see The Village People?

Admittedly, the only original Village Person was lead singer Victor Willies, but he was backed up by new construction worker, biker, Native American, and more (though if Disco Demolition Night is going to be reexamined today, then shouldn’t someone maybe not Native American who wears a full headdress costume be looked at?), who had full dance moves (the construction worker even tore off his t-shirt and threw it into the crowd). They did “Macho Man”, the closed with (of course) “YMCA” (reportedly somehow heard at the Boston ‘Straight Pride March’) – they were the surprise Riot Fest ’19 act that you had to check out. 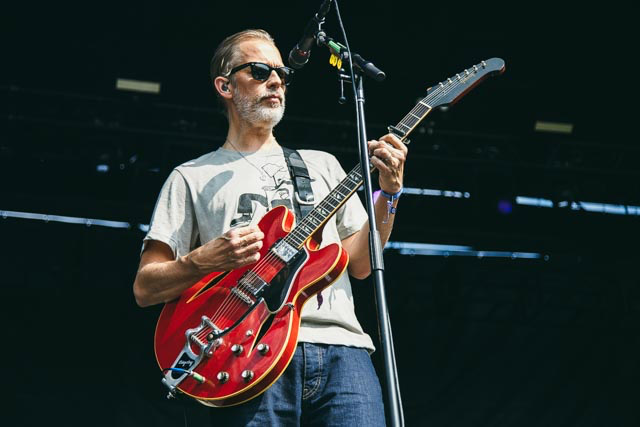 This was Riot Fest ’19, so naturally their set overlapped with two others very worthy of being seen: Less Than Jake at the Rise Stage, and Ride at the Roots Stage. Less Than Jake came out of the northern Florida ska-punk scene in the genre’s mid-nineties heyday, and if you had a ska phase in high school, watching them start with “Johnny Quest Thinks We’re Sellouts” was great. Ride came up in their own, very different, mid-nineties British shoegaze scene, and have reunited behind two great new records, Weather Diaries (QRO review) and this year’s This Is Not a Safe Place (QRO review), bringing a more rocking show (though all three suffered somewhat from sonic bleed from the other two).

Doing not one, but two records in full on the Riot Stage was Against Me!. Practically Riot Fest regulars by now (QRO photos at Riot Fest ‘15), they played both 2002’s debut Reinventing Axl Rose and 2014’s Transgender Dysphoria Blues (QRO review), the latter the band’s first album after singer/guitarist Tom Gabel (QRO interview) became Laura Jane Grace. It’s rare that a record so recent gets the ‘full album performance’ treatment at Riot Fest, but it’s a real twenty-first century statement. 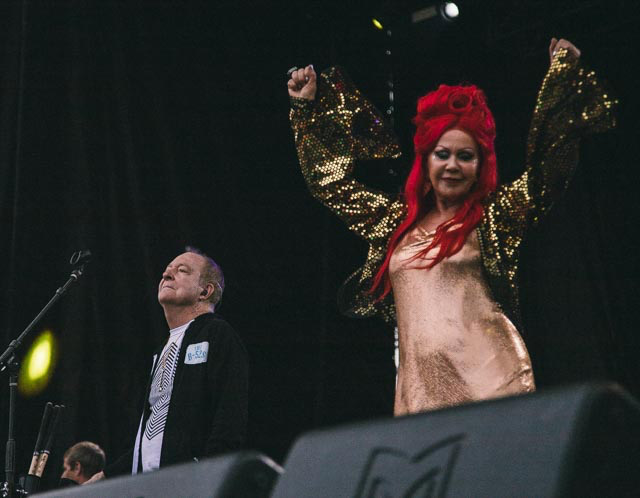 Your correspondent’s toughest conflict of all of Riot Fest ’19 was The B-52s vs. Bob Mould (poor American Football getting lost in the mix on the Rise Stage). Mould was favorite artist for decades, but never seen B-52s, and it was billed as their ‘Final Chicago Show’, though they don’t seem to have announced real farewell plans. The B-52s had the bigger crowd at the smaller Radicals Stage, and there was some sonic bleed from Mould at the bigger Roots Stage, but his guitar would knock out everything in a five mile radius. They also didn’t just jump into their instantly recognizable hits, even doing “Planet Claire”, the b-side to their first single, “Rock Lobster” (which they did close with). But they can “Roam” if they want to. 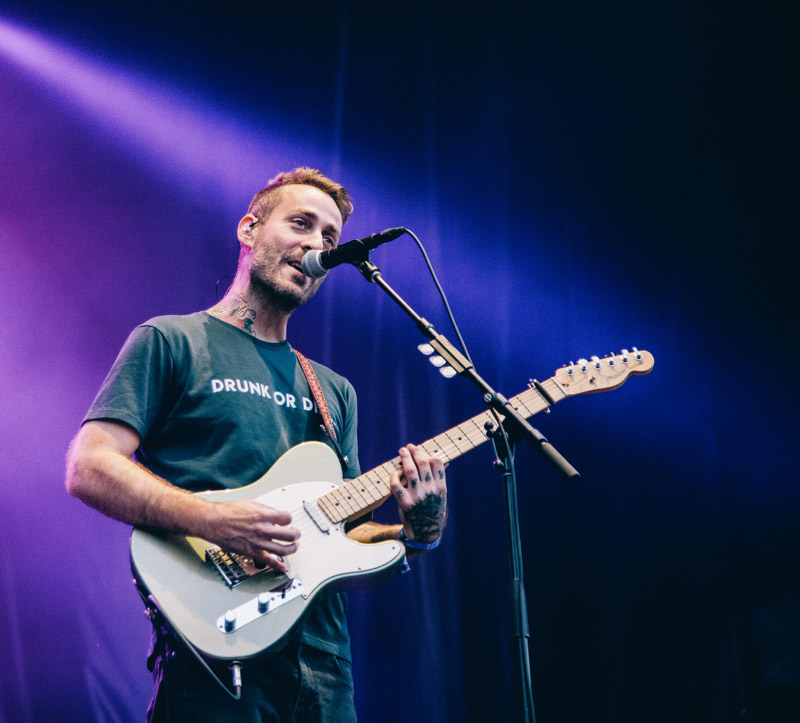 It was a “Good Idea” for Bob Mould to “Flip Your Wig”, and “I Apologize” for checking out The B-52s, as Mould didn’t just stick to his great this-millennium solo material, but also brought in nineties Sugar and eighties Hüsker Dü (QRO spotlight on) greats. That included “Never Talking To You Again”, a tribute to his late Hüsker bandmate Grant Hart (QRO interview), who passed away during Riot Fest ‘17.

Patti Smith has been called the ‘Godmother of Punk,’ and so was a fitting act to return to Riot Fest (QRO photos at Riot Fest ‘14) at the Riot Stage. Yet she seemed to play a lot of covers of other artists from her heyday, such as Jimi Hendrix’s “Are You Experienced?”, Rolling Stones’ “I’m Free”, Lou Reed’s “Walk on the Wild Side”, Neil Young’s “After the Gold Rush”, and even Midnight Oil’s “Beds Are Burning”. All great songs, and Smith & co. (her band included her son Jackson on guitar, who also sang “Free” & “Walk”) pulled them off with aplomb (Smith mentioning being born within shouting distance of the festival), but a bit of an odd choice. Especially when she had great songs of her own, like “People Have the Power” and the covered-by-many-others “Because the Night”.

If last year’s Boarding House Reach (QRO review) was everything you hate about Jack White, The Raconteurs are everything you love about Jack White. His reunited band has a great new record out, Help Us Stranger (QRO review), and instead of all the self-conscious & self-indulgent rock star frills of solo White, it was just straight-up rock & roll, with White his enthusiastic best. Facing a Riot Fest crowd at the Roots Stage that could have easily been judgmental, they crushed it (and bonus point for giving it up for the headliners). 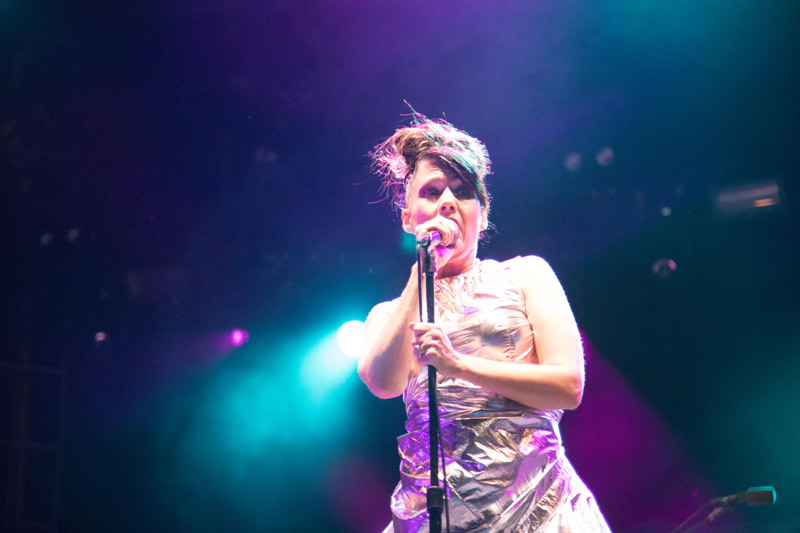 Riot Fest has always been known as a place where iconic punk bands reunite, from Misfits to Jawbreaker to The Replacements to this year with Bikini Kill. The absolute right place for the original riot grrrls to get back together for their first Chicago show in 20+ years, at the absolute right time. We needed Bikini Kill, and we needed them here & now. Like many of the other big Riot Fest reunions (though this wasn’t their first reunion show overall), they weren’t the biggest bands in their heyday (MTV was looking elsewhere), but their status has only grown since then.

A special moment was when lead singer Kathleen Hanna told how the lyrics to “Feels Blind” were taken from a poem she had written as a teenager, about her experience with an older man who she thought was taking her seriously, but just was working in to try to shove his tongue down her throat. Hanna said that she had never thought then that she would be singing those words to a crowd of thousands. And yes, they closed out Riot Fest ’19 with their classic punk anthem, “Rebel Girl”. 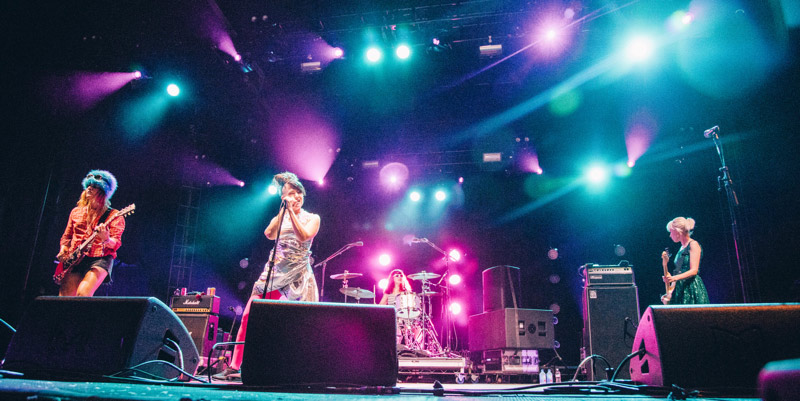