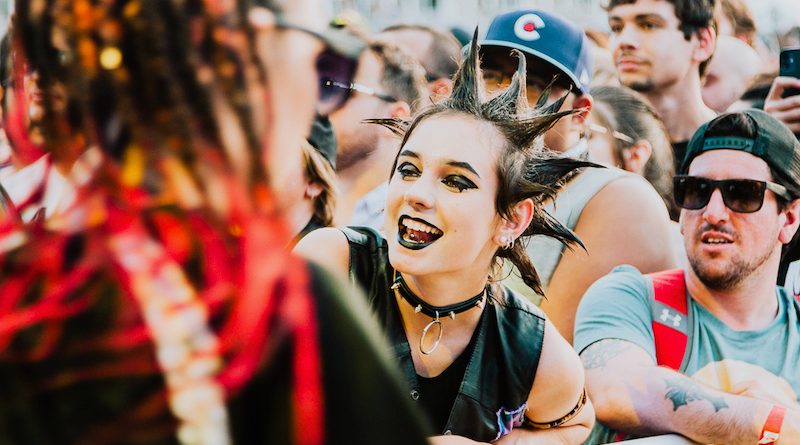 A hotter Saturday at Riot Fest started with the punk-rock-pop overlaps such as Joywave on the Roots Stage, Citizen at the Rise Stage, and Bearings on the Rebel Stage. But it was the theatrical that took center stage in the middle of the fest. There was Riot Fest regular GWAR back to once again defile on the Radical Stage (QRO photos at Riot Fest ’19), including a mock-Taliban beheading a mock-Biden, anointing the crowd with (fake) blood, and declaring, “Chicago, we are fucking sick of you!”

At the Riot Stage, Big Freedia brought the New Orleans bounce up the Mississippi, including some killer dancers (unlike the massive mainstream fests, Riot Fest does lack in dancers). She did “Goin’ Looney” from the Space Jam 2 soundtrack (perhaps the only thing worthwhile about Space Jam 2), plus call-and-response “I got gin in my system / Somebody’s gonna be my victim!”

But no one out-wilds Tim Harrington and Les Savy Fav. Of course, the singer went into the pit on the very first song (sending photographers scrambling…), and shirtless into the crowd on the second song, lying atop a lying-on-a-blanket couple (sending your correspondent next to them scrambling…). He swapped a hat for a wig, later put on a fur skin, pulled a fan into the pit to ride him, went all the way to the soundboard (picking up a fan’s fan and some ski goggles along the way) to having security surf-carry him back to the stage on top of a folding table. It’s been a long time since the band’s last studio record, 2010’s Root For Ruin (QRO review) – bassist Syd Butler & guitarist Seth Jabour are busy as part of The 8G Band on Late Night with Seth Meyers – but they’ve lost none of their live skill.

The late afternoon, just as the heat of the day has really baked in, favors more relaxed bands, as opposed to the in-your-face. Best Coast are a very relaxed band, sometimes too relaxed, but for their Riot Stage performance they wisely upped the rock. Meanwhile on the Radical Stage, Hepcat not only sounded like what you would expect/want from a band named “Hepcat,” they even looked it, inviting specific punks in the crowd to dance with their ska. They were also a great act to be playing nearest to the food stalls & their long lines, easy to enjoy while waiting or eating.

It’s kind of tragic that the immigrant punk message of Gogol Bordello has become so relevant these days, but they delivered it – and their music – so well back at Riot Fest on the Roots Stage. Not a crime! Unfortunately, they overlapped (always an issue with the ever-stacked Riot Fest) with Bayside on the Rise Stage celebrating “21 Years of Really Bad Luck,” The Bollweevils on the Rebel Stage, and fellow Riot veterans The Mighty Mighty Bosstones on the Radical Stage, who showcased why they’re the biggest name in third wave ska, and another act perfectly suited for Riot Fest. Admittedly, they probably played more from this year’s When God Was Great (QRO review) than the crowd wanted, since they’ve got a deep well of classics, but this is their first time to play it on the road. And even newer songs can become classics after a while, such as 2018’s “Green Bay, Wisconsin” from While We’re At It (QRO review) and 2011’s “They Will Need Music”, to go with “A really old song … Probably written before you were born,” “Hope I Never Lose My Wallet”. And there was still the oldies like “Hell of Hat”, their cover of Bob Marley’s “Simmer Down” (“This is a song written by a man who wanted unity & hated division”), and close with “The Impression That I Get”.

On paper, an outsider would think that hip-hop would be an odd fit at best at Riot Fest, but in reality, those that are game reap the rewards. Case in point was Chicago’s own Vic Mensa on the Riot Stage, returning to the festival (QRO photos from Riot Fest ‘17), and not just because it’s a hometown event. He played his debut mixtape Innanetape in full, including “Holy Holy”, in tribute to murdered-at-seventeen brother Cam, and “16 Shots”, inspired by the death of another seventeen-year-old, Laquan McDonald, at the hands of cops that occurred not far away from Douglass Park.

The rest of Saturday was similarly rocked by acts that just love playing Riot Fest. Rancid nicely came after The Bosstones & Hepcat on the Radical Stage, the ska shifting into ska-punk – still with the upstroke, and still wanting your “Salvation”. Chicago’s own Rise Against filled in last minute to play the Roots Stage, joking that the nice local weather wasn’t always like this, and just giving it their all. Meanwhile, Andrew W.K. made the Rebel Stage the Party Stage, actually kind of fitting with the carnival rides (he’s since been dubbed the #PartyThor on Twitter, as he’s engaged to Kat Dennings, a.k.a. MCU scene-stealer Darcy Lewis).

Another rap Riot returnee was returning headliner Run the Jewels on the Riot Stage. It’s just great to see El-P and Killer Mike so enjoying being as big as they are, while also not losing touch from where they came, Mike paying tribute to Chicago’s own Alice Smith, who taught the very politically active musician all about organizing. And dropkicking Saturday to a close were the Dropkick Murphys on the Radical Stage.