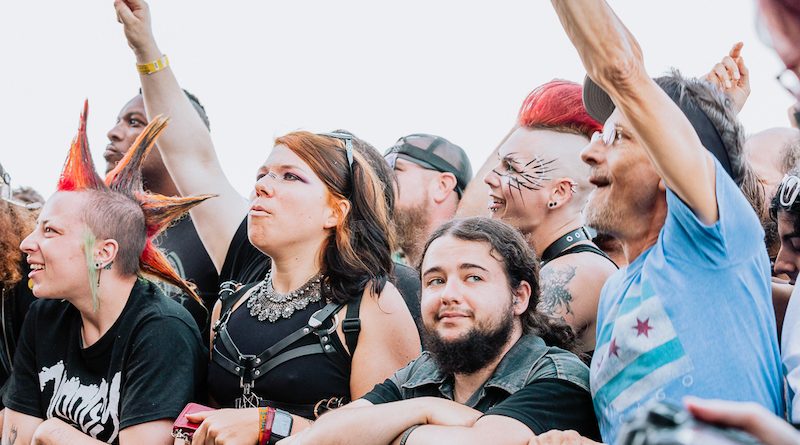 Going into the long weekend, Sunday at Riot Fest ’21 seemed the most troubled, after Nine Inch Nails dropped out and there was really no act that could replace them (just, in general). But it became a ‘bullpen game’ of many strong artists.

Admittedly, it wasn’t the highest-demand start, as the likes of dance act 3OH!3 at the Rise Stage was a weird fit for Riot, while back-to-his-original-name Alex G wasn’t memorable on the Roots Stage. But Radical Stage’s BLACKSTARKIDS impressed on the Radical Stage with their hip-hop/pop style and young, upbeat way at what they said was their first-ever festival appearance. Another good, if raw, hip-hop act on the final day was KennyHoopla at the Radical Stage.

Okay, so you only know of Body Count because it’s frontman is rapper/actor-turned-actor/rapper Ice T of the ultra-long-running Law & Order: SVU, which has been on the air longer than some Riot ’21 attendees have been alive. Or if you’re older than that, you might remember Body Count’s infamous “Cop Killer” that got nineties killjoy Lovejoys all in a huff. But just this year they won a Grammy for Best Metal Performance, and were a great act to see at Riot Stage that you wouldn’t have seen on their own.

Especially if you were in press tent and saw them take photos with fellow Riot Stage performer DEVO, because that’s what twenty-first century music-of-any-era/genre is all about (just as long as it’s not Lulu – QRO review). Ohio’s own pre-post-punks masters of devolution started with a 40-year-old mock video of their manager trying to get them to sell DEVO dolls and more, then showed him now, still joke-denouncing the art-punks for not selling out so they could be playing stadiums like Kid Rock. They started with “Peek-a-Boo”, and unlike the requests from the subterranean freaks on Futurama, they also played hit “Whip It”, and in the middle, after which they stepped off stage for another video, describing their galactic insignificance. Admittedly, they did lose some of their audience at that point, but it’s just amazing that they’re still playing live shows, despite never answering the age-old question as to whether or not they are men?

While those who wanted their emotionalism more straightforward headed to the Radical Stage for Simple Plan or Rise Stage for New Found Glory, The Roots Stage closed out its 2021 with The Flaming Lips. Another act that came on last minute to help out a festival they love (QRO photos at Riot ’19), the band didn’t come empty-handed. Yes, there were still their giant stage theatrics, including a massive inflatable “FUCK YEAH RIOT FEST” balloon (do you think they reuse it?), a giant inflatable pink robot for “Yoshimi Battles the Pink Robots” (do they just have a ‘balloon guy’?), and frontman Wayne Coyne got in his own human-sized inflatable hamster ball, though didn’t surf the crowd as he noted that the group is being more careful right now (earlier this pandemic, they played a whole show where everyone, band members & fans, were in their own individual clear plastic balls). Coyne advocated scream-therapy, at least at this moment, advocating encouraging the person next to you to scream.

The last of the last minute Riot ’21 fill-ins was Slipknot, and while obviously disappointed no Nine Inch Nails, bringing them and The Flaming Lips in was a pretty great move. Plus, the Iowa act has been wearing masks since before it was fashionable. If you’d been put off by all their horror-theatrics before, it was notable to see them at this festival both being so into what they are, yet also not excluding. Like hearing frontman Corey Taylor talk, and he sounds like a normal guy under that scary mask. They play from their first record – but also have another set of giant drums up on another level of the Riot Stage.

Meanwhile, just around the corner to close the Radical Stage was rapper-turned-rocker Machine Gun Kelly. At this point, his own pretty mainstream punk performance has been kind of eclipsed by his celebrity persona. And this time, not for dating Megan Fox (who appeared side stage at his surprise Lollapalooza set a month-and-a-half ago – QRO recap), but at Riot Fest for taking a shot at Taylor & Slipknot for, “Being 50 years old, wearing a fuckin’ weird mask on a fuckin’ stage.” Kelly added, “Turn the lights up. Let me see who chose to be here instead of with all the old weird dudes with masks.” This was not unprovoked or out of nowhere, as Taylor had previously said on a podcast that he doesn’t like people who, “Failed in one genre and decided to go rock, and I think he knows who he is.”

[note: the following weekend at Louisville’s Louder Than Life, which Slipknot didn’t play but a lot of other heavy rockers did, Machine Gun Kelly’s set was booed, some fans jumped the barricade and one even tried to confront Kelly in pit, with which the singer threw a punch, but they were all still well separated by security]