More Click here for photos of festival sights from Riot Fest ’21 in the QRO Concert Photo Gallery 2021 has not been a normal year, and this was not... 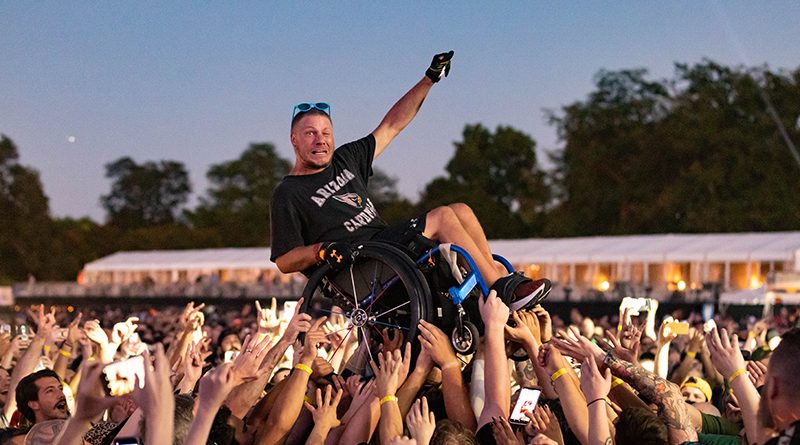 When Nine Inch Nails cancelled their 2021 tour, including a stop headlining Riot Fest, instead of the festival collapsing, Riot expanded to a special Thursday ‘Preview Party’. Yes, there were those who complained (fans complaining about Riot Fest line-up?!? Never…), and it was a little odd to add another day that you could only get tickets for by having a Sunday or three-day ticket (there were some Thursday tickets on sale for charity – possibly Riot Fest didn’t have the permits for a regular ticketed extra day at Douglass Park). It was only the two main, alternating stages, but carnival rides like the chill Ferris Wheel were free, and if you could make it, it was great.

[like if you were your correspondent, staying in Chicago after the prior weekend’s Pitchfork Festival – QRO recap – and had something bonus to do as opposed to another day at his Airbnb. But your photographer couldn’t make for the extra early day, thus photos provided by Riot Fest]

California’s Joyce Manor played their self-titled 2011 debut on the Roots Stage, joking that it was from the Obama era. Riot Fest has long specialized in artists playing an old record in full, from The Flaming Lips’ Yoshimi Battles Pink Robots in 2019 (QRO photos) to The Mighty Mighty Bosstones’ Let’s Face It in 2017 (QRO photos) – both artist playing this year – but only a few for 2021 (enough difficulty setting up the festival in general). The crowd knew the songs, and yes, there were crowd-surfers.

Sometimes punks don’t respect their past. Sometimes their past doesn’t deserve respect. Patti Smith deserves respect, and received it at her Riot Stage – along with just general cheers & enjoyment. Started with, “Happy Mexican Independence Day – another strike against colonialism!” (and no, frat boy, Cinco de Mayo isn’t Mexican Independence Day, but rather a celebration of their defeat of an invading French Army that’s been completely appropriated…). And then into “People Have the Power”, naturally. Smith has earned her activist credentials – and has also made more great songs than you remember, such as “Because the Night”. She & her band played her “Redondo Beach” the way Thursday headliner Morrissey covers it, “It’s sort of our Morrissey tribute to our own song, but that’s okay, I’ll pay my Morrisey tribute.” She joked that she was wearing glasses not because she was “trying to look scholarly,” thanking the sun, “But you’re shining in my fucking eyes!” She was upbeat, but noted that we’re living in a global crisis, “Take care of yourself…”

It’s no wonder that Alkaline Trio is a Riot Fest regular. They’re locals and totally appropriate, just the right age/level of experience (and punk). If you were just coming to this ‘preview party’ because you bought a three-day pass, and are that level of Riot Fest fan, you would be happy to see them having fun on the Roots Stage.

During Joyce Manor’s set, the singer asked who was psyched for Morrissey, and as many people booed as cheered. That’s the way it’s been for Moz in recent years, what with his anti-Covid precautions statements, flirtations & more towards English nationalism, on top of his already notorious proactive/pushy stance on vegetarianism, and indeed cancelling shows himself. There’s also been his general perceived antipathy towards his days fronting arguably the greatest British band of the eighties, The Smiths – at Riot Fest 2016, he only played one Smiths song in his entire headlining set, and came on a half-hour after his schedule start (QRO recap). He’s even had anti-mask/vaccine murmurs during the pandemic.

But at Riot ’21, Moz started with “How Soon Is Now”, one of The Smiths’ biggest songs (and the theme song to the original WB’s Charmed, kind of randomly). The set included other hits such as The Smiths’ “Shoplifters of the World Unite”, his own “Everyday Is Like Sunday”, and even a cover of The Pretenders’ “Back on the Chain Gang”. While projected above his head were political images seemingly disconnected from whatever he was playing, Morrissey refrained from his usual diatribes, even stopping himself at times – his most pointed might have been about flying in on United, “Somehow, I survived…” Yes, the food stalls were all vegetarian (as opposed to just shutting down early, like at ‘16), but they weren’t vegan, so you could still get a jumbo slice of pizza for ten dollars.

It was almost like Morrissey understood the nature of the assignment. Of course, he still ended early at 9:25 PM, five minutes before the night’s already early end, and while the crowd wanted more Moz, he did not return. Leave ‘em wanting more, I guess…