It was an emotional return of Riot Fest & more.... 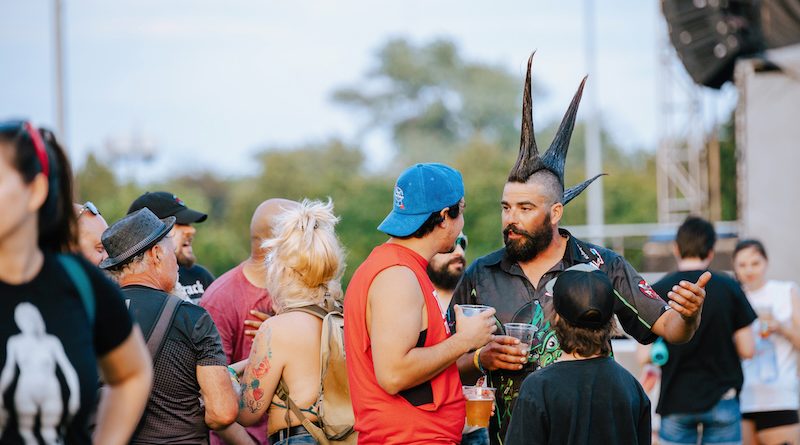 It was a beautiful Friday to start Riot Fest, and great acts to kick it into gear. On the Rise Stage, Foxy Shazam were suitably wild and glam, along with some of the best facial hair at Riot Fest (and that’s saying something). Meanwhile, Lagwagon’s Roots set was strong, active, even frenetic punk rock, fitting for not just the festival, but also the time of day. Jeff Rosenstock had some early technical issues at the Radicals Stage, leading the crowd on sing-alongs to nineties hits like Weezer’s “Say It Ain’t So”, until thing got right and he could rock.

Riot Fest certainly knows how to draw on punk past’s deep well, and that could be seen in acts like Rocket From the Crypt, who played 2001’s Group Sounds at the Rise Stage, or Riot vets Descendents on the Roots Stage, who drew from their seminal Milo Goes To College, which just turned forty (but does Milo still have student debt?…). But Descendents also have newer material that fits right alongside Milo, if not reinventing, then doing what they do, well. Sparta brought out Trust the River, “A record that we released in March 2020 that we thought was going to stop the world in its tracks,” more epic and emotional on the Riot Stage.

Pop-punk has always gotten a bit of frosty reception from punk purists, but Riot Fest nicely mixes it in. Admittedly, pop-punk wonder kids The Wonder Years sounded more punk their reputation would imagine on the Radicals Stage, playing off of out-the-next-Friday’s The Hum Goes On Forever. Emo can similarly clash with punk, but is also welcome at Riot Fest (particularly on the day My Chemical Romance was headlining), such as Taking Back Sunday playing their umpteenth Riot at the main Riot Stage, frontman Adam Lazzara often remarking how still-into the festival they are (and how psyched he was for next-on-that-stage MCR). There was even a couple in the crowd who got engaged, after having had their first date at an earlier TBS Riot Fest set.

While the likes of Cloud Nothings and Destroy Boys rocked the small side Rebel Stage, Alkaline Trio returned to Riot Fest with the right level of epic rock at the Roots Stage. They dedicated “Save Me” to late local Chicago author Michelle McNamara, who wrote I’ll Be Gone In the Dark.

Yet Riot Friday wasn’t all about returnees & old acts. Portugal. The Man are usually the one rock band at a Gen Z pop fest, so couldn’t stand out quite as much on the Rise Stage, but the festival let them be themselves, including starting with Native American women singing (originally from Alaska, Portugal has long championed America’s indigenous, such as single “Who’s Gonna Stop Me”, that featured none other than Weird Al Yankovic in a rare non-comedic role), as well as covering everyone from Nirvana (“In Bloom”) to It’s Always Sunny In Philadelphia’s Charlie Day (“Day Man”), but also hit singles such as “Feel It Still” and “All Your Light”. Meanwhile around the corner at the Radical Stage was Jack Antonoff and his Bleachers. Whatever one thinks of him as a pop producer of leading ladies such as Taylor Swift & Lorde (to say nothing of having once been the guitarist for the once-hit, now-forgotten fun.), his own band is quite enjoyable. Yes, clearly neo-Springsteen, but he loves it, saxophones and all.

Just judging by the crowd, the day clearly belonged to headliner My Chemical Romance. It’s been two-and-a-half years since they announced their reunion, only to have to delay & delay it, including the last two years of Riot Fest, so anticipation was particularly high at the Riot Stage, even for this highly-anticipated tour (QRO photos the weekend prior). It was a massive crowd, singer Gerard Way often having to ask people to take a step back to ensure safety. And Way (wearing a headscarf, oversized glasses, a dress, and heels, as he’s been challenging traditional masculinity since before Harry Styles was one of One Direction) still has his voice, always important in a reunion, but particularly for such a near-screamo act. As they have all tour, they started with their new “The Foundations of Decay”, just in case you thought this was just nostalgia, but there were still girls crying to songs from Three Cheers for Sweet Revenge or The Black Parade. Kind of the perfect band to reunite to Riot Fest, and well worth the wait.