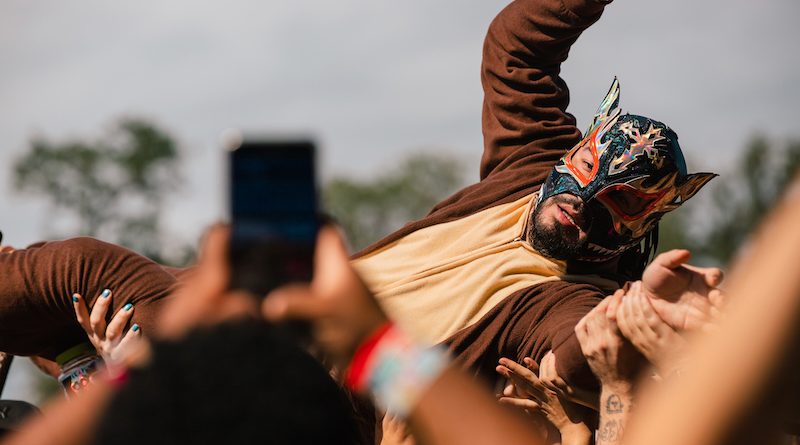 The heat finally came for Riot Fest on the final day, roasting early acts such as Mom Jeans on the Rise Stage & Jawbox on the Roots Stage, the latter showing why they are one of those, ‘respected & influential vets, if never widely successful’ acts – a.k.a. the perfect for during the day at Riot Fest.

While the emo-punk of The Juliana Theory was relatively run-of-the-mill at the Radical Stage, it was fine for Riot Fest. The gothic sounds of Zola Jesus were a little bit odd to watch under the sun at the Riot Stage, something even she admitted (along with that she’s from Wisconsin), but made it work.

The Lunachicks brought fun NYC glam-rock to the Roots Stage, but it was a bit crowd at the same time around the corner at the Radicals Stage for Less Than Jake. The ska-punk vets have kept it going since in the nineties, and there were lots of nineties kids who’d had ska phases back then at Riot Fest. LTJ still wish they “Had My Own Flag”, but did pull out toilet paper shooters – combining that with a speech on the history of anti-racism, because of course they’d do both.

Like Zola Jesus before on the Riot Stage, it was another ‘kind of should be playing at night’ up there with Poliça, who lacked the former’s stage presence (and crowd). Meanwhile, Riot Fest did bring some hip-hop, of course old school, with Coolio, though he finished early at the Rise Stage. Better were harder hitters such as PVRIS and Midtown at the Radicals Stage.

Emo veterans Jimmy Eat World have gone from being nobody, to being a big hit, to being a used-to-be-big, to their current comfortable level – which is when you play Riot Fest. And they still love it, singer/guitarist Jim Adkins thanking for being able to just do this for a living (as well as pre-warning anyone messing with crowd-surfing girls). And yes, they ended with their forever hits, “The Sweetness”, then “The Middle”.

Riot Fest has long embraced feminism, from early Sunday acts like PVRIS to Alice Glass on the Rise Stage. Once of Crystal Castles, she has since escaped the Castle, denounced her old, controlling male partner, and instead is making her own name. And if you didn’t know that original riot grrrls Sleater-Kinney were going to mix their skilled, killer indie-rock with calls to vote & not to take away their rights, what kind of Riot Festivalgoer are you?

And perhaps the most anticipated act at Riot ’22, certainly outside of the delayed headliners, was the return of The Yeah Yeah Yeahs, on the Roots Stage. Art-punks who came out of the early aughts NYC ‘return of rock’ scene, they’ve had the habit of making a great record, touring it, and then disappearing for a handful of years – and their latest disappearance was extended thanks to COVID, but thank god, they’re back, with new album Cool It Down coming out at the end of the month. Indeed, as frontwoman extraordinaire Karen O announced, this was their “First official show back in the U.S. of A.” O had the audience in the palm of her well-dressed hand, from the new “Wolf” to the huge cheers for Nick Zinner’s opening guitar to “Maps” (up there with the guitar open to Phoenix’s “Lisztomania” in this century/millennium’s great guitar opens, on par with the start to The Beatles’ “Come Together”). They could go from, “This is The Yeah Yeah Yeahs’ love song!” to the all-time tragic refrain, “They don’t love you like I love you,” to the killer dance of “Heads Will Roll”. Oh, and they had giant balloon eyeballs bouncing over the crowd to boot (plus added great guitarist Imaad Wasif – though drummer Brian Chase will always this correspondent’s favorite member…).

Last year, when Nine Inch Nails had to cancel their tour, including headlining Riot Fest, a lot of fans were angry, and directed their anger towards Riot not giving refunds (instead giving those buyers a second, bonus day with Morrissey – QRO recap). But NIN have finally returned this year, headlining a slew of festivals, like the Riot Stage (or filling in for the tragically absent Foo Fighters and the last-minute COVID-cancelling Strokes back in May at Boston Calling – QRO recap). Trent Reznor & Atticus Ross might write Oscar-winning soundtracks these days, but they, Robin Finck, Alessandro Cortini, and Ilan Rubin (QRO interview) still know how to crush it, whether with classics such as “Head Like a Hole” & “Hurt” to newer songs like the alt-rock “Less Than” or weirder, sax-powered “God Break Down the Door”.

And give credit to The Academy Is… for having to go up against NIN and still delivering on the Radicals Stage to close out Riot Fest ’22.