From backing music on a viral Tik Tok challenge, to a record deal and tour – Rutter has been on a whirlwind journey over the past two years.... 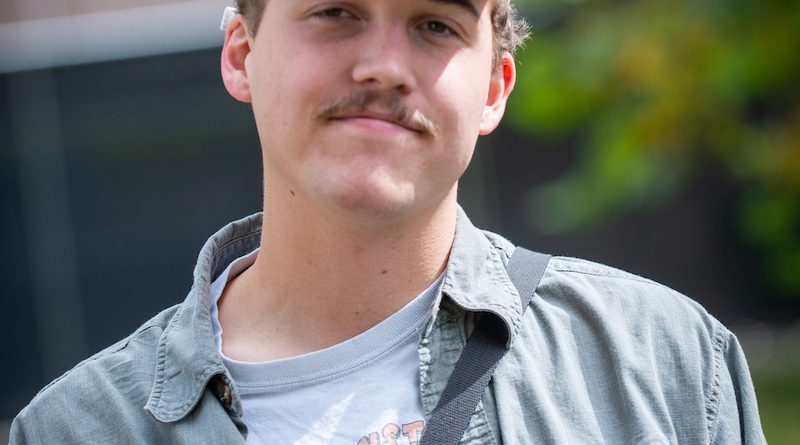 While at Shaky Knees, QRO sat down with Jack Rutter, a.k.a. Ritt Momney. From backing music on a viral Tik Tok challenge, to a record deal and tour – Rutter has been on a whirlwind journey over the past two years. This 21-year-old is doing what he has always wanted to do, but it comes at a price – the pressure to live up to your dreams. Rutter seems to be handling it with grace, as he moves from a life in Salt Lake City to the Big Apple, and he’s looking forward to what’s next.

QRO: First, I have to ask: The name: “Ritt Momney.” I know you’ve said that it doesn’t really mean something specific, but a way for you to stick it the man, but you grew up in Salt Lake City, the Capital of the Church of Latter Day Saints, and Mitt Romney is arguably the most famous living church members. Any connection there?

Jack Rutter: It was kind of just indirectly, because he was so popular there, basically because he’s Mormon, because he’s not even from Utah, interestingly…

QRO: Yes, of course, he did organize Utah’s Winter Olympics in 2002. But that was some time ago.

JR: Oh, yes – but it was a while after he ran for President, and everyone was talking about it, so I guess it was that idea of flipping someone like that on their head or something (being a little subversive).

QRO: I believe this is your first longer-term experience on tour, though you did a couple of shows with Dayglow, before the pandemic shut down. Now that there are concerts again – what is it like being on the road? Especially at the relatively ‘tender age’ of 21?

JR: It was really interesting to have never played a festival before, then come out of the pandemic playing festivals, which is awesome, obviously. It feels like, during the pandemic, I was sort of thrown into this world. It’s pretty wild. It’s wild seeing this many people come out and want to hear me sing. It’s awesome. Touring is the best way to get back out into the world, I think.

QRO: How about the logistics, about staying in hotels, maybe not getting to see the cities where you perform, has that been difficult, or become a ‘grind’ yet?

JR: Not yet, I’ve mainly just done festivals so far, so it’s kind of been pretty self-contained, I would say. It’s been really great. I haven’t had any huge inconveniences because of COVID.

It’s wild seeing this many people come out and want to hear me sing. It’s awesome.

QRO: Here at the festivals, do you get to listen to any acts?

JR: That’s my favorite part of coming to these things. It’s like a free pass to see people (I like). I’m really excited about after the set today, because I really like Modest Mouse, I really like Phoebe Bridgers, and I really like The Strokes. It’s going to be an awesome three-band consecutive show for me. I’m excited.

QRO: Not to harp on age, but 21 is young for the kind of success you are experiencing. What is keeping you grounded?

JR: I’ve definitely struggled with that. It was a very rapid progression I think, and it was surprising. I wasn’t necessarily in the best mental state for this, and it was a bunch of anxiety – A bunch of pressure I was putting on myself to capitalize on the situation. I’ve since adjusted to that pretty well, I think. I just released an album on Friday, (Oct. 22, Sunny Boy). A lot of the process of that album was so anxiety-inducing. I felt like “Oh man, I can’t flop. I can’t put out a flop after the success. This is a chance to establish myself.” But I haven’t really thought like that in a while. I’ve been taking more the approach that, if somebody on Instagram says “Oh, I love this album” – that’s like one person, a real person who actually enjoys my music, as opposed to my thinking “Oh man, not enough people are listening, and the numbers aren’t there.” I’ve kind of separated myself from that whole world and focused on the reason I wanted to make music in the first place, which is to make stuff that I like and enjoying how people connect to it.

I’ve definitely struggled with [success at age 21]. It was a very rapid progression I think, and it was surprising.

QRO: You are a primarily a songwriter, but your cover, [Corinne Bailey Rae’s] “Put Your Records On”, a breakthrough hit for you. What is the right mix between original and cover songs as you conceive LPs?

JR: Yes, (“Put Your Records On”) was THE thing that helped me break through.

QRO: The success of “Put Your Records On” was due, in no small part, to TikTok as it was the soundtrack for a viral make-up challenge, with 1.4 million views. Were you already a fan of TikTok? What kinds of clips do you like to watch?

JR: I love watching TikTok to a degree. Obviously, you don’t want to spend [too much time on it]. Some of my worst days have begun with laying on my bed and getting on TikTok. Once I do that, it’s like “That’s it. I’m going to have a terrible day, no matter what.” But my girlfriend and I send TikToks to each other that we think are funny. That’s one of our favorite things to do. We’ll just scroll through TikTok for a little while, every day. It’s fun. There is definitely some really funny and really cool stuff on (the platform). I’ve found a lot of great songs on there, that I really enjoy. I don’t post very much. I haven’t posted in months.

QRO: They found you, though!

JR: It’s funny. I posted that song on Distrokid, so I actually made my TikTok account after [the song] started doing so well on Tik Tok. So, it’s pretty insane that it took off like that before I even posted a video.

Ritt Momney’s video of cover of Corinne Bailey Rae’s “Put Your Records On”:

QRO: Your video for “Put Your Records On” is so dreamlike and uplifting. What the process of telling a story on film? And how much were you involved in its creation?

JR: That’s a good question. I like to find somebody’s work that I like, and then let them do their thing. Obviously, I want to be involved in my videos, but I do really enjoy finding an artist, and then giving them free reign. This group of guys, Overcast – they’re a group of people that we got onboard to do that video. They pretty-much told me what to do and I did it. They’d ask me “do you like this? What about this outfit?” So, I made little decisions like that, but it was cool to see their vision come to life.

QRO: It really did seem to match up so well with the spirit of the song. It seems like they ‘got you.’

JR: I agree. I think it matched really well with the song.

QRO: You are a solo performer, but Ritt Momney was originally a band. What are the pros and cons of working alone, as opposed to collaborating with other artists?

JR: That’s a good question. I think I’ve realized that – on my first album, I made it a point to do everything myself, and that was really nice, and fun – that learning curve. I was learning how to make music, as I was making [the album], and I had something pretty specific I wanted to say – a specific story to tell – so I think that worked well for that. For this album, it was more general ideas that I had and I wanted maybe a less therapeutic approach, and a little bit more of a fun, “let’s just make some good songs” approach, and there was a lot more collaboration on this one. I think that [approach] worked really well for that. I think it depends for me on what I’m trying to do.

After the first album, I thought, “I want to do this for the rest of my career. I want to do everything by myself, all the time,” but I’m glad I didn’t take that approach, because I would have missed out of so much by collaborating.

After the first album, I thought, “I want to do this for the rest of my career. I want to do everything by myself, all the time,” but I’m glad I didn’t take that approach, because I would have missed out of so much by collaborating. Seeing someone else’s art meshed with my art – and being able to see parts of me and parts of them in the same song, is one of the coolest things for me. It’s been great working on “Sunny Boy.”

QRO: You’ve recently signed with Disruptor/Columbia, did they bring some new things to the table?

JR: Yes. That, and more in general, just to put your records out with that visibility – it made people more likely to respond to an email now. I’ve gotten to work with some cool people that I don’t think I would have been able to without that support. Disruptor /Columbia have definitely set up some sessions for me that have been awesome.

QRO: I’ve been told that you’ve just moved to New York City. What’s next for you, in general?

JR: I’m touring next year, but I don’t know. That’s the exciting thing. The day after this album came out, I thought “Man, I can really do something else now. I can work on whatever I want.” It’s exciting to figure that out, but I don’t really know yet.

Damon Albarn – “The Tower of Montevideo”