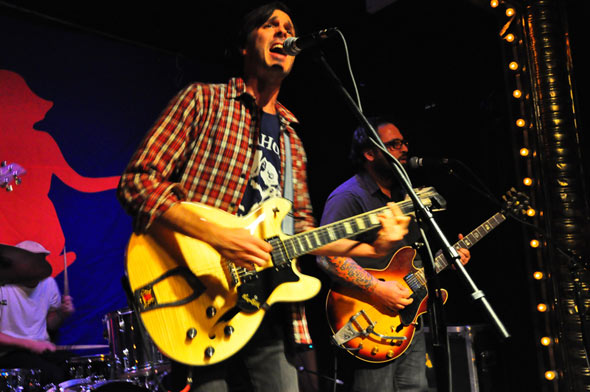 Rival Schools, a collective of hardcore legends, played Union Pool (QRO venue review), Brooklyn on a very special one-off show on Friday, April 23rd.  Not only has frontman Walter Schreifels been exceptional in the forefront of the New York hardcore scene’s establishment, but all four members have been heavily influential, with the scene, with a flurry on involvement with bands Iceburn, CIV, Quicksand, Burn, Judge, and Glassjaw, to name but a few.  But despite all of this, Rival Schools have made a name for themselves and its clear to see why. 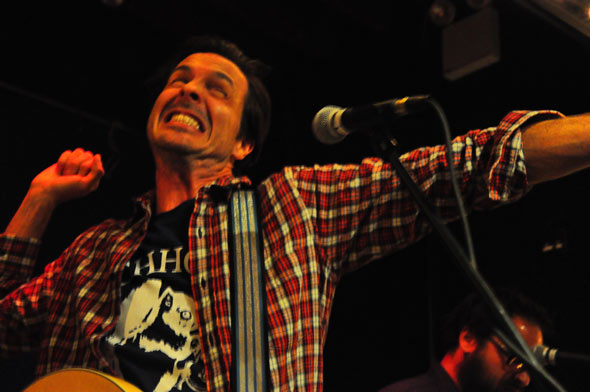 Perhaps a celebratory event given front man Walter Schreifels had just made it back to New York City after being stranded by volcanic ash in a very obscure ‘Dharma Initiative camp’-type place near Moscow, Russia, and in that case, it explains a lot – because this show proves there was a real party to be had.  A show that quickly sold out with much sought-after tickets, it was clear to see why with the band showing up refreshed and on top form.  Frontman Schreifels hit the stage with boundless energy, running and jumping with no qualms, fronting one of the most notable comebacks from the post hardcore scene of the noughties. 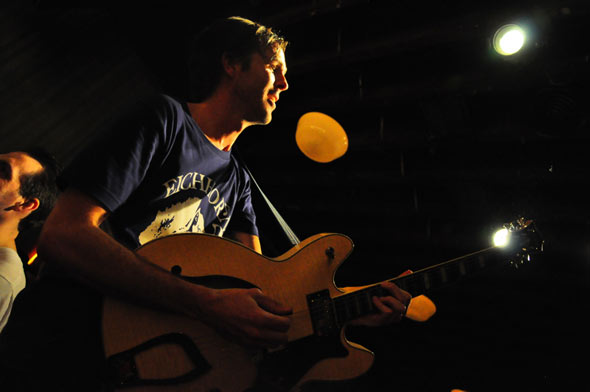 Click here for photos of Rival Schools at GamesCon Convention in Cologne, Germany on August 23rd, 2009 in the QRO Concert Photo Gallery

Launching into "Everything Has Its Point", a track off the 2001 album United By Fate, the band fast found its groove as they blasted off hit after hit off their critically acclaimed album.  The crowd was encouragingly and crazily responsive, showing that even after an almost ten year hiatus, there is still enormous love and appreciation for Rival Schools.  The band reformed in 2008 and have been touring in stints, whilst members of the band have both been involved in issues of recording, producing and touring – most notably Schreifels, who has just returned from a U.K. tour (QRO tour review) and has a debut album under his own name, An Open Letter To the Scene (QRO review), released on may 4th 2010 on label Academy Fight Song. 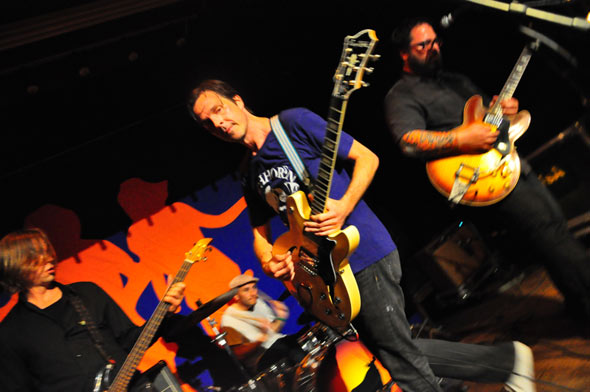 Following "Everything Has Its Point", Rival Schools launched into "Travel By Telephone" and "High Acetate", with backing vocals provided by the crowd, singing, moving and grooving to the tunes provided.  The energy was buzzing and already Schreifels had made a 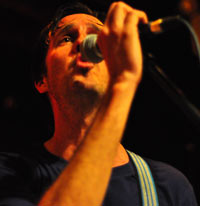 number of totally heinously unfunny jokes, arguably the only negative trademark of his.  Of course, humor is in the eye of the beholder and even three songs on, Walter could’ve claimed a Nazi salute but have done no wrong, even at this early stage of the night.

Even launching into new song "69 Guns", the band seemed tight as ever and it is undoubted that the band new material down to a tee.  With the addition of new songs "Sophia Loren" and "Small Doses", there is no doubt that their new album, which is yet to be titled, out in September, will be a killer to bring Rival Schools back to the forefront of the rock scene. 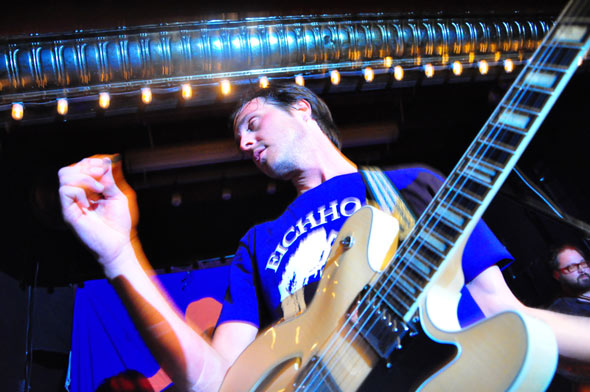 Such was the reception the band received, and the absolute buzzing high that Schreifels was on, the he even stated he’d love to start the set again and play everything right through.  The show had to go on with a curfew fast approaching, and the show continued with the consistently hard-hitting tracks off their debut release.  "Undercovers On", one of the most loved tracks off the debut, evoked a heavy amount of emotion from all, and was a true highlight of the evening, with soaring distortion provided by the one and only Ian Love.  Undoubtedly, singles "Used For Glue" and "Good Things" were in the mix, crowd favorites, which really provoked an animated response from all present. 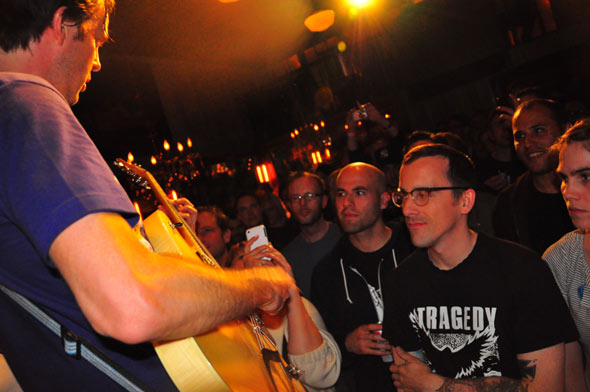 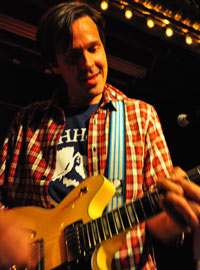 The band’s history and involvement with the hardcore scene continuously precedes them, with requests from the crowd of various Quicksand and Gorilla Biscuits tracks.  Despite this, the show was no disappointment, with the band cutting their scheduled break for an encore and launching into the lyric-less "Hooligans For Life".  The band closed with the well covered "How Soon Is Now" by the infamous Smiths, who have been noted to influence main songwriter Schreifels in his solo work, and which the band had performed a myriad of times before at numerous dates.  This too was killer, and despite so many bands attempting to cover this track, Rival Schools yet again proved to stand out from the rock and roll crowd with an outstanding, heavily melodic version of this well-known and well-loved song.

The show left many itching for more, and rightly so.  With many questions being asked about when a new release is happening, a September 21st release date has finally been given and it’s official.  It’s going to be good.  It’s going to be nothing less than mind-blowing, if any of the new material is anything to go by.  September 21st – pen it in your diaries.  Be excited – because (wait for the cheese…) – good things are definitely coming our way. 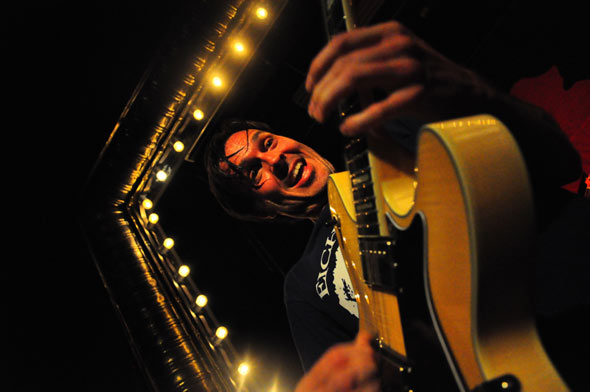 Everything Has Its Point 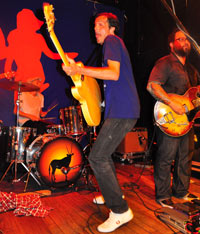 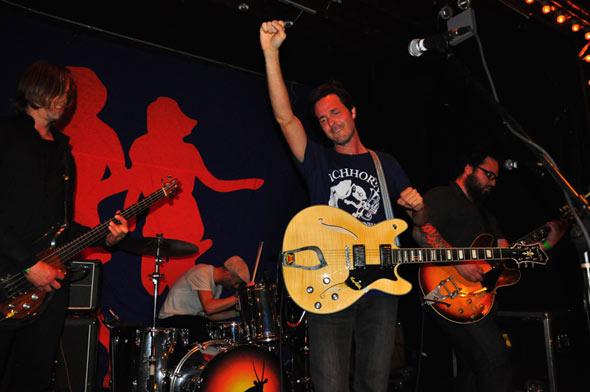