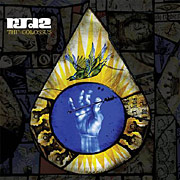 When it comes to mixing hip-hop with electronics, there are few as reliably clever as RJD2.  Any of his mixes can turn on a dime:  from rapid-fire percussion backed by a twisted orchestra to a bouncing lounge beat to a spaced-out buzzsaw, RJD2’s repertoire is a pack of chef’s knives sharpened on a street curb.  His fourth album, The Colossus, is another sharp addition to his catalog composed of brilliantly obtuse angles.

The Colossus begins with an attention-grabbing mash of horn fanfare and a thumping, scattered rhythm on “Let There Be Horns”.  It’s mysterious and diabolical, which only turns up the interest factor on the rest of what’s to come.  The second track, featuring Kenna, is laid back with an urban-mystical vibe that floats on a swirling mix of electronic and glassy sounds that is tailor-made for a bedroom dream sequence.  RJ’s first vocal appearance comes on “The Glow”, an earth-toned groove injects cool energy into the tracklist.

Aside from the fuzzy jams and razor-sharp production, RJD2 also includes a few guests on The Colossus.  Two standouts are “The Shining Path” and “Crumbs Off the Table” – a couple of patent leather-smooth tracks that feature Phonte Coleman and Aaron Livingston on vocals, respectively.  The former is a chilled, xylophonic cruiser that coasts effortlessly along Coleman’s old school vocals and the latter is a souled-laced mix of brass, phasers, and Livingston’s staccatoed delivery.  Both give The Colossus a flash-forward/flashback effect at the same time.  “A Son’s Cycle” is a more traditional hip-hop number courtesy of guests The Catalyst, Illogic, and NP.

Add The Colossus to RJD2’s catalog as a fine installment of his signature instrumentation and altogether engaging vocal performances.  RJ’s clever skills shine throughout, and are only enhanced by his guests’ work on the album.  Worthy of several spins to take in its entireity.