<img src="http://www.qromag.com/wp-content/uploads/2012/11/robzombienov27.jpg" alt="Rob Zombie & Marilyn Manson : Live" /><br /> The ‘Twins of Evil Tour’ came to town and it was costume night at the Manchester Evening News... 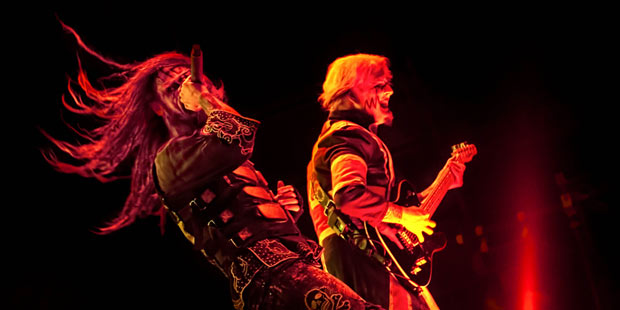 The ‘Twins of Evil Tour’ came to town and it was costume night at the Manchester Evening News Arena on Tuesday, November 27th.  There was plenty of pale skin and black eye shadow on display, a lot of leatherwear, several hundred bondage enthusiasts, a few sexy Nazi girls in full SS regalia.  A large contingent of the undead were in from somewhere near Wigan.  It was a sea of black and white (with the occasional cherry red hairdo for variety), but there weren’t any nuns.

Time was when a few nuns waving placards and sprinkling holy water on the concertgoers were an essential part of the build up to a Marilyn Manson show, but nobody pickets him anymore.  Nobody holds him personally responsible for any atrocities.  Nobody hates him.  This audience came for a night of pantomime grotesquery – they wouldn’t get another chance to break out these costumes again until the touring production of The Rocky Horror Show arrived.  The demographic was strikingly broad, both Manson and co-headliner Rob Zombie have a wide fan base, including plenty of grandparents and children.  There’s no doubt about it, Marilyn Manson has now officially been declared safe.

Having spent many years complaining about being public scapegoat number one for a wide range of random atrocities, it ought to make a nice change to be a family favourite.  And there was always something endearingly vulnerable about him, the white face and eyestripe not the mark of a monster but rather the sign of the perpetual outsider – condemned to unjust vilification for the crimes of others.  You’d think he’d be pleased.

He didn’t look pleased however and there was precious little of the vulnerable Manson on show at the MEN.  He seemed to be taking the ‘Twins of Evil’ tag pretty literally and the set list was packed with his loudest and most abrasive material, opening with “Hey Cruel World”, “Disposable Teens” and “Love Song” and closing with “Antichrist Superstar” and “Beautiful People”, taking in “mOBSCENE” and “Rock Is Dead” along the way.  Each song was dispatched with relish, allowed to scream for a while before being finished off with a stake through its heart; Manson’s voice was in fine fettle, hysterical one moment, menacing the next.  There were, of course, lots of costume changes, several feather boas in a variety of colours and some fantastic light effects but Manson himself seemed somewhat distant; he engaged only occasionally with the audience, throwing a few angular shapes with the microphone stand and issuing a few booming obscenities.

The audience screamed and punched the air during the rocking out numbers but their biggest reaction was reserved for the two cover versions that made up the middle part of the show, Depeche Mode’s “Personal Jesus: and the Eurhythmics’ “Sweet Dreams (Are Made of This)”.  For these songs Manson allowed the decibel level to drop just a little and it was here that he made best use of the deeper end of his vocal range, the sly and insinuatingly wicked vocal stylings which have always been a feature of his recordings, but which feature less in his live performances.  He ruthlessly dissected these small innocent songs and reassembled their still quivering parts into gothic inversions of themselves, teasing dark nuances from the lyric with irresistible relish, investing them with a menace that their authors surely never envisaged.

Manson has always been a master of image manipulation and there was plenty of that in evidence on stage – his guitar is equipped with a laser rifle sight which he played on the audience during “Slo-Mo-Tion”, inverted American flags featured widely, the stars replaced by a jagged fascistic arrow, and during “Sweet Dreams” a single lamp in a circular shade was lowered from the roof to hang just above Manson’s head evoking countless movie scenes of torture and interrogation, but at times the whole symbolic edifice seemed somewhat random and top heavy – particularly when two crew members manhandled a distinctly wobbly looking barbed wire tinseled pulpit onto the stage for Manson to mount and declaim “King Kill 33” Nuremberg Rally-style.  One began to suspect that perhaps Manson had taken his reputation for evil just a little too seriously – and recent events in the U.K. have shown that we can create plenty of evil of our own thank you, and it is more likely to be wearing a track suit and smoking a big cigar than sporting a gimp mask and red leather elbow gloves. 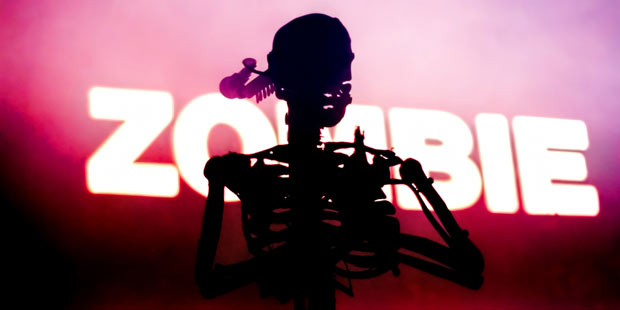 If Manson’s set verged on the over serious the same cannot be said of his partner in wickedness on the night, the gloriously over-the-top Rob Zombie.  Having revitalized the Halloween franchise, Zombie now divides his time between music and filmmaking, but whichever he’s doing he seems to give it one hundred percent, and his set featured every horror trope in the playbook.  When asked how long he will continue making music he usually replies, “As long as it’s still fun” – and he certainly appeared to be having a great time this night.  Having emerged from a giant robot at the start of the show, Zombie delivered several numbers from behind a microphone stand surmounted by a six armed skeleton, before being joined on stage by an assortment of aliens, Halloween pumpkins and (of course) Satan, who put in an 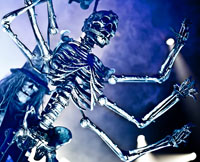 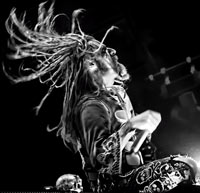 But for all the horror imagery Zombie always appeared to be aware of the high camp nature of his enterprise – he swung his massive dreadlocks from side to side like a man with a head full of nunchucks (he was lucky not to have anyone’s eye out) and danced around the stage with his arms held wide and curved as if he were polkaing with an imaginary fat girl, but he also knows that even the most diehard fans of the genre need some occasional light relief.  His attempt to organize adversarial community singing with one half of the audience (“The ones on the right of that guy with the 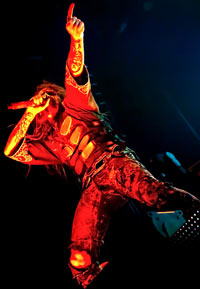 skull bandana” – definitely the best line of the night) chanting “Rock, Rock, Rock” while the other half countered with “Motherfucker, Motherfucker, Motherfucker” rapidly disintegrated into disaster, but later while guitarist John 5 played an exhilarating extended solo Zombie descended from the stage and completed a full lap of the arena with security men floundering in his wake as the crowd parted before him but then closed up just as quickly when he had passed.  In this context the arrival on stage of dozens of large brightly coloured balloons which Zombie and the band kicked out for the audience to amuse themselves with came as no surprise.  Much hilarity ensued.  “When you’ve all finished playing with fucking balloons perhaps we can get back to some serious business,” Zombie growled before launching into “Pussy Liquor”. 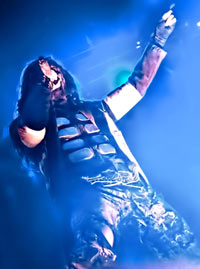 There was an early nod to Zombie’s early career in the White Zombies with “Thunder Kiss ’65”, and then songs were drawn even-handedly from his solo albums – highlights were the infectious stomp of “Sick Bubblegum” from Hellbilly Deluxe 2 and “Meet The Creeper” from HD version 1.  The set concluded with Alice Cooper’s “School’s Out” and then another on stage pulpit arrived, this one taking the form of a huge alien/dinosaur rib cage from which Zombie delivered everybody’s favourite goth rock anthem Dragula to close out a riveting performance.

As the leather clad hordes left the arena an elderly man and woman stopped to allow the motley collection of goths, vampires and assorted walking dead to pass in front of them.  They looked puzzled but not intimidated.  “What is it?” the woman asked.  “I think it must be some kind of concert,” replied her husband.  They don’t scare so easily in Manchester any more. 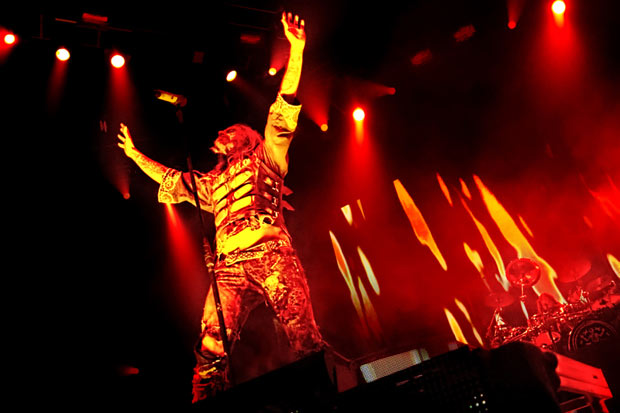