As sad as it is to say for some, there comes a time in many artists’ careers when they become parodies of themselves.... 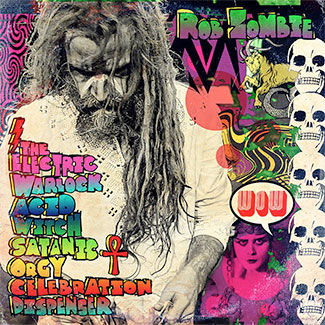 As sad as it is to say for some, there comes a time in many artists’ careers when they become parodies of themselves. One of the main indicators of this is when they release sequel albums to their most memorable releases (see Eminem’s most recent studio effort, The Marshall Mathers LP 2 from 2013.)

This brings us to the subject of this review – Mr. Robert Zombie.

Mr. Zombie is considered by many to be one of the godfathers of modern day shock rock along with artists like Marilyn Manson. His first album, 1998’s Hellbilly Deluxe, was a relatively amazing industrial metal album that firmly cemented him in modern rock apart from his former band White Zombie. Two years later (the shortest timespan between any of his albums) he released his sophomore album The Sinister Urge and while not as monumental as its predecessor it certainly packed a punch of its own.

Click here for photos of Rob Zombie at Cellairis Amphitheatre in Atlanta, GA on August 14th, 2018 in the QRO Concert Photo Gallery

Click here for photos of Rob Zombie at Shoreline Amphitheater in Mountain View, CA on July 29th, 2016 in the QRO Concert Photo Gallery

Click here for photos of Rob Zombie at 2013 Rockstar Mayhem Festival in The Woodlands, TX in the QRO Concert Photo Gallery

The Sinister Urge sort of coincided with the release of Zombie’s first film, House of 1000 Corpses, even though the film wasn’t officially released until a couple of years later in 2003. It was at this point in Rob’s music career when we lost him to filmmaking. He has continued to release albums, but it is apparent that the majority of his passion gets poured into his movies and he injects whatever adrenaline he has leftover into music.

Enter his 2010 record Hellbilly Deluxe 2. When you don’t have an original idea, take a name your fans know and love and slap a number two at the end of it and it’s certain to make you at least some money.

His most recent release, 2013’s Venomous Rat Regeneration Vendor (QRO review) was the first installment in what is now considered to be a whole new chapter of silly phoning it in. First we got a vendor, now we get a dispenser.

It is his shortest album, clocking in at 31 minutes, and that might be one of the only redeeming qualities of the album. At least it passes quickly. Since it’s Rob Zombie there is always at least some entertainment value, but for longtime fans of his I’m afraid that this release might signify that we can’t ever expect anything on par with Hellbilly Deluxe ever again.