Unfortunately, Rob Zombie is either becoming or has become a parody of himself – it’s as simple as that.... 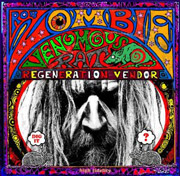 Unfortunately, Rob Zombie is either becoming or has become a parody of himself – it’s as simple as that.  His music has not changed in the slightest even since his days fronting White Zombie.  For crying out loud, trying to capitalize on the popularity of his first and most successful solo album, he released Hellbilly Deluxe 2!  Where’s the inspiration in that title?  Actually, the full title was Hellbilly Deluxe 2: Noble Jackals, Penny Dreadfuls and the Systematic Dehumanization of Cool.  Given that, and that the actual title of his aforementioned first album was Hellbilly Deluxe: 13 Tales of Cadaverous Cavorting Inside the Spookshow International, the crazy-ass title of his latest album, Venomous Rat Regeneration Vendor, really comes as no surprise.  Back to the point, Rob Zombie is comfortable existing within the horror metal genre that Alice Cooper created and that he has curated since the late ‘80s.  If you can get past all of that, his music is definitely entertaining – it just comes down to whether or not you prize artistic evolution.

Click here for photos of Rob Zombie at 2013 Rockstar Mayhem Festival in The Woodlands, TX the QRO Concert Photo Gallery

That being said, looking at Venomous Rat Regeneration Vendor for what it is, it’s a solid horror rock album incorporating words like “Nosferatu”, “Lucifer”, “Monsters”, and “Coffin” in its song titles.  There is also a song called “Ging Gang Gong De Do Gong De Laga Raga”, which doesn’t have anything to do with horror, but is just weird.

The album opens with an interesting song, the title of which will (should) make you cock your head and think, “That sounds inappropriate,” but then again, considering this is Rob Zombie we’re dealing with, it might not phase you at all.  However, you can be shocking without talking about teenage vagina.  What is really interesting about this song, however, is that the chorus is almost identical to the song “Demonoid Phenomenon” from Hellbilly Deluxe.  The only difference is that the tempo of this piece is slower.  Maintaining both a steady music and film career, Zombie has always been known as a hard worker, but could this be a sign that he is either getting lazy or has run out of fresh ideas?  He has one of the greatest metal guitarists of all time (John 5) in his arsenal, so it’s hard to believe either to be the case, but who knows.  The music speaks louder than whatever his intentions might have been.

Interestingly enough, the coolest song on the album isn’t even Rob Zombie’s.  It is a cover of Grand Funk Railroad’s “We’re An American Band”.  This marks the second time Rob Zombie has tackled a cover song, the first being The Commodores’ “Brick House” from the soundtrack to his utterly grotesque directorial debut House of 1000 Corpses.  Adding his twisted touch to classic songs like these churns out a pretty cool result.

Coming full circle, musically speaking, Rob Zombie hasn’t evolved as an artist, but that may not matter, as his music remains groovy and entertaining.  He just might be one of those few acts out there that will be able to survive (maybe even thrive) just doing what he does best.  Perhaps the next five or ten years will tell.  Until then, enjoy the Venomous Rat Regeneration Vendor madness.

Funeral For a Friend