<img src="http://www.qromag.com/wp-content/uploads/2010/09/robertpollardmosesonasnail.jpg" alt=" " />Even if you can't keep up with the prolific Robert Pollard, check out the once-and-future Guided by Voices frontman's newest. ... 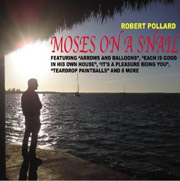 There might not be a more prolific artist today than Robert Pollard.  Even in his early days fronting the seminal Guided by Voices, there was an album a year (at least), and his solo career started while still in the band (though after the break-up of the ‘classic line-up’, 1994-1996 – that a line-up which was only in existence for two years could be considered ‘classic’ indicates their level & amount of output…).  In over two decades Pollard has some 1,300-plus songs to his credit (and that’s just the ones registered with BMI).  So it can be hard for all but the Pollard die-hards to keep up with his material, but even those outside the cult circle should check out his latest, Moses On a Snail.

Now, Moses On a Snail does not differ greatly from Pollard’s large, continually-expanding body of work, putting alt-country in more of a hard-rock procession, but it has more staying power, such as on muted opener “The Weekly Crow” and the grungier subsequent “A Constant Strangle”.  Not every piece in this vein stays as well – “Lie Like a Dog” is just a weaker “Strangle” – but Pollard also does more, such as go brighter with “Arrows and Balloons”.  That likewise has its better moments, in the wistful “Each Is Good In His Own House” and sad “Teardrop Paintballs”, and worse, as the stop-start to “Ice Cold War” doesn’t mix well with brighter moments, and “It’s a Pleasure Being You” is a little cheesy, but it thankfully varies Moses.

Interestingly, Pollard is at his best when he either goes more upbeat than before, or more downbeat.  There’s a catchy, garage-y up-tempo to “It’s News”, and “Big Time Wrestling” is a country-bop one-two hop along.  Meanwhile, “How I’ve Been In Trouble” takes Pollard’s procession to a much darker place, more haunting and sustaining, yet retaining its Pollard-ness.  In contrast, the titular closer is a guitar solo-wail heavy procession that feels longer than it actually is.

Robert Pollard’s large output can work against him, not just in overwhelming fans, but also in leaving the bad with the good when he throws everything up there (maybe no one would be better served by the often-pointless ‘greatest hits’ compilation).  However, a lot of eyes are turning back to the troubadour as of late, after the announcement of a reunion of the Guided by Voices ‘classic line-up’, first for their then-label Matador Records’ 21st anniversary festival (QRO Festival Guide), and subsequently for a full-on reunion tour, joining the likes of Pavement (QRO greatest hits review) and Superchunk (QRO live review) – both of which are also playing ‘Matador at 21’.  Hopefully some of those old GBV fans will take a gander at Pollard’s most recent, even if they can’t quite handle the full weight of all things Pollard.

MP3 Stream: “How I’ve Been In Trouble”