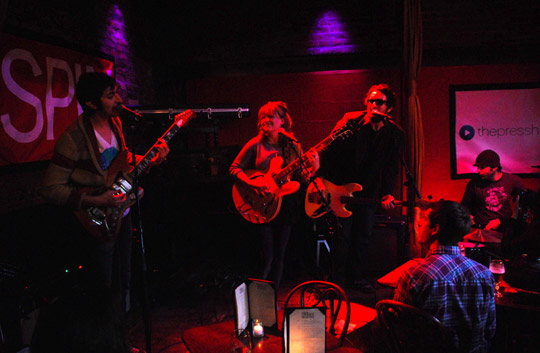 Rockwood Music Hall is located on 184 Allen Street, Manhattan, between E Houston and Stanton Streets.  It lays within the circle of venues in the Bowery (roughly between Houston, A, Delancey Street, and Bowery), which includes Piano’s, Cake Shop, Arlene’s Grocery, Mercury Lounge, Bowery Ballroom and others.

Rockwood Music Hall is actually three spaces, right next to each other on Allen.  The north-most one is just a small bar space; it is the one to the south that is the Stage #1 (the two are linked through a door by both space’s bars).  The entrance to Stage #1 is a phone booth-sized foyer that opens to the left.  The concert space is small, with an even smaller stage to the right – and made smaller by the piano on it (if a band has a drummer, they may have to set up on the floor).  Surrounding the stage are small tables and chairs, tightly packed and a little haphazard, giving a ‘coffee house’ vibe.  There’s some space to stand behind them, though that’s also the route to walk in the place.  The bar lies along the wall to the opposite of the entrance, from the street to the small entrance from the other space, and past that is a one-person bathroom.

Stage #2 is the south-most space, and is larger and deeper – there are still tables and chairs, but they are not as closely clustered together.  After some steps down from the door, there is a bar to the right of the door, the stage to the far side.  While larger than the stage at Stage #1, the stage at Stage #2 is still not very large, and is, like in Stage #1, in the corner, not taking up a full side.  While all the shows at Stage #1 are free, some of those at Stage #2 are not (though tickets are still only ten-fifteen dollars.  There is also a much smaller Stage #3 below the two main stages.

Rockwood Music Hall is one of a group of low-end venues in the Bowery – small, lesser facilities, cheap drinks, etc.  In fact, it’s lower & smaller than Cake Shop, Piano’s, or even Living Room, to the point where virtually all shows there are free (though there is a sometimes-enforced drink minimum).  The ‘coffee house’ vibe & space naturally lends itself to singer/songwriters, but ones you’ve never heard of (save during CMJ, and even then, only somewhat).  And if there is someone people have heard of, the place gets packed.  Location & price might be right, but all else isn’t. 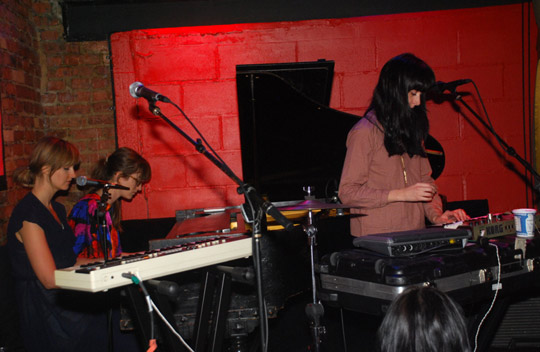 Quasi as The Who