Roseland Ballroom closed with a series of performances by Lady Gaga, ending on April 8th.

Roseland Ballroom is located on 239 West 52nd Street, Manhattan, between Eighth Avenue and Broadway.  It is actually the second Roseland, the first existed on Broadway & 51st Street from 1919-1956, before it was moved to the current location, a former ice-skating/roller-rink.  It remained an actual ‘ballroom’ until original owner Louis Brecker sold it in 1981, when its regularly scheduled ‘disco nights’ grew increasingly dangerous (discontinued nine years later).

Reflecting its history and high-class Midtown location, Roseland Ballroom is much more of an actual ‘ballroom’ than such locales as Bowery Ballroom, Highline Ballroom, or even Hammerstein Ballroom.  It is a massive venue, holding more than Hammerstein to the south or Terminal 5 to the west, despite being only two levels.  It manages this by being not only wide but also quite long, with a deep balcony (and stage floor area beneath the balcony).  With the stage at the far end, it does mean a lot of the crowd is viewing from a long distance, but Roseland does have an excellent sound system and light show.  There is a bar at the far end of the stage floor (and above that in the balcony), near the entrance, as well as one around the house-left side of the stage (which is much less busy, though the route to it, underneath the balcony, going past the stage, can get absolutely packed).  There is also a VIP area (with cash bar) along the house-right side of the stage floor (the original stage for the space – it is occasionally used as the concert stage for shows/events), raised above the stage floor, with both table and chairs (usually reserved) and standing space behind that, giving a strong view for VIPs.

Roseland only occasionally plays host to concerts, being used more often for Midtown galas such as charity fundraisers, corporate events, and massive parties.  When it does hold concerts (usually through LiveNation), they are of some of the largest acts, more on the level of Madison Square Garden (or at least WaMu Theater at MSG).  Not the greatest place to see a band (unless you’re a VIP), being either in the massive center crush, or else at a point far distant, but one of the few places to see a band that big in Manhattan. 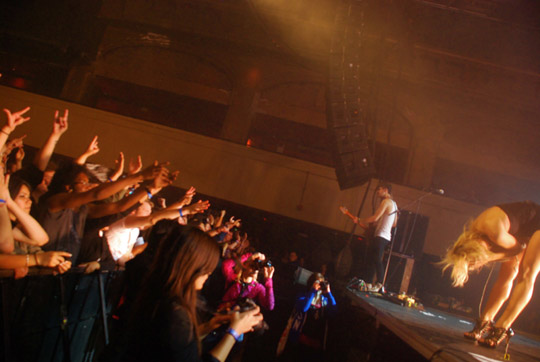