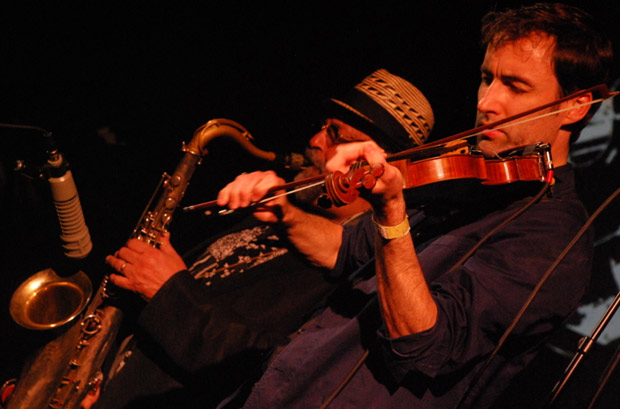 Click here for photos of 2014 Round Robin Duets in New York, NY in the QRO Concert Photo Gallery

Two experimental music festivals in New York met in a grand musical experiment at Brooklyn Masonic Temple on May 1st.  The large, sponsored Red Bull Music Academy, which runs events throughout the city from the end of April to the end of May (QRO NYC Show Preview) teamed up with the much smaller Undead Music Festival, organized by local musician Adam Schatz (also of acts like Landlady and Man Man, and previously of Family Time’s Previously On Lost – QRO interview) for ‘Round Robin Duets’.  In it, a musician would play for about five minutes, then was joined by another for five minutes; then the first musician would depart while a second would join, and after another five minutes, the second musician would be replaced by a fourth, etc.  Twenty artists made for nineteen different pairings (and two solo performances, at start & finish) – and it was all improvised. 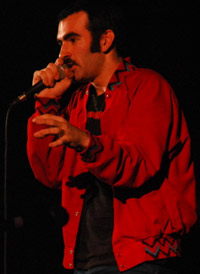 One must note that the highly unusual, improvised event (which wasn’t strictly a ‘Round Robin’, since it never came back on itself – and the duets were almost all instrumental, not vocal) was not like the vast majority of other concerts.  If you don’t like experimental music, if you don’t like improvisation, if you don’t like unusual instrumentation, harmonies, or timing signatures, you wouldn’t have liked this – but you also wouldn’t have gone in the first place.  This was an event for aficionados of music strange even for Brooklyn.

Like perhaps any improvised performance, or any brand new experiment, the Duets took a while to warm up.  The event was billed to start at 8:00 PM (doors at 7:00) and run for two hours – instead the actual event started at 9:30 PM (did run for two hours, thus ending a half hour before midnight).  Preceding it was an extensive performance electronic beat and sounds artist Jameszoo – which frankly went on way too long (especially since no one had any idea when he would end & the event would begin).  Brooklyn Masonic Temple (QRO venue review) also wasn’t an ideal location – it had seating for the older attendees (though it filled up pretty quick), but its somewhat makeshift conversion to music venue isn’t that great on sound (also, drinks had to be purchased by first buying drink tickets – and the bartenders seemed to have been chosen more for their alt-hipster appearances than for their actual abilities to pour drinks or even notice customers…).

Jameszoo also started the actual event, which meant five more minutes (it was actually more like six minutes per artist/pairing, which was probably how it was planned, as twenty artists x six minutes each = the two hours that were planned) of what you’d already heard more than enough of – but then came the first ‘star’ of the night, ?uestlove of The Roots (QRO album review).  The beloved drummer of the acclaimed band received a round of applause when he entered, which set the stage for each artist getting cheers (?uestlove also saw the start of people taking photos with their smartphones – even after Schatz, in his introduction, asked people to, “Put away your damn phones because nobody cares about your Instagram…”).  The two beat performers didn’t gel that well, but things picked up when jazz saxophonist Matana Roberts took over from Jameszoo – one hallmark of the evening was that the jazz performers were naturally particularly skilled at improvisation (another hallmark was that they were the least known of the artists, and got the smallest amounts of applause when appearing on stage). 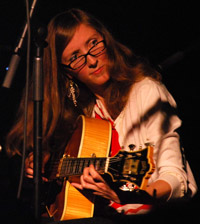 The jazz continued with Roberts teaming up with jazz guitarist Mary Halvorson, then Halvorson with bassist (and collaborator with Flying Lotus – QRO live review) Thundercat, until singer/keyboardist Julia Holter brought a more electronica air to the event.  That certainly continued with drummer/loopiest Dosh (who plays the next three nights in a row, with a variety of musicians, for the rest of Undead Music Fest), but the jazz returned with trumpeter Roy Hargrove.  When Dosh left, the event did have its first definite stop, as Hargrove looked a little confused as to when saxophonist/pianist James Chance would start – and what Chance was going to play, because he’d brought sheet music to the improvised music event. 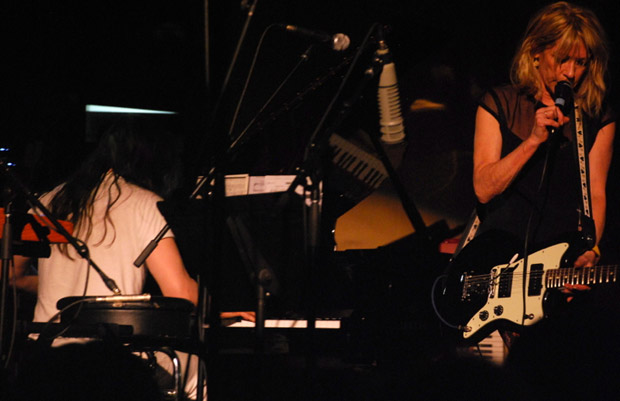 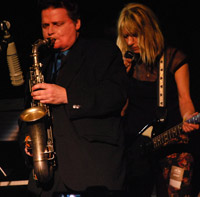 Chance did improvise once he took up his saxophone, when the next big star of the night joined him on stage – Kim Gordon of the legendary punk icons Sonic Youth (QRO live review).  Gordon’s been in the news since her divorce from longtime husband & bandmate Thurston Moore (QRO solo live review) – most recently with an article about the divorce, including the ‘other woman’, in Elle – and she came to Red Bull Music Academy behind her new band, Body/Head (Moore’s got his own group, too, Chelsea Light Moving – QRO photos – while fellows Youthsters Lee Ranaldo and Steve Shelley have their own solo project & joined a new band, respectively; but whither Mark Ibold?…).  Sonic Youth have long been known for their experimental abilities, including many ventures into noise-rock, so her inclusion wasn’t out of left field.  However, Gordon struggled to thrash on stage next to a saxophonist – it was only when Chance was replaced with the next star of the night, singer/pianist and party enthusiast Andrew W.K., that Gordon seemed in her element.  W.K. (QRO live review) is one of the most fun figures out there in indie, doing everything from opening his own venue, Santos Party House (QRO review) to appearing on Aqua Teen Hunger Force – and is no stranger to team-ups, having done an amazing one back in April at South-by-Southwest by the equally exuberant Nardwuar (QRO photos of them together).  His easy personality not only assuaged Gordon, but also gelled even better with the following Bernie Worrell.  W.K. moved from piano to keyboard as Worrell took up his own set of keys, and though the original member of Parliament/Funkadelic had some sound teething problems, he quickly fell into the groove.  Maybe the most enjoyable moment of the entire event was W. & W. swapping tones (with Worrell playing a few recognizable ditties) and smiles. 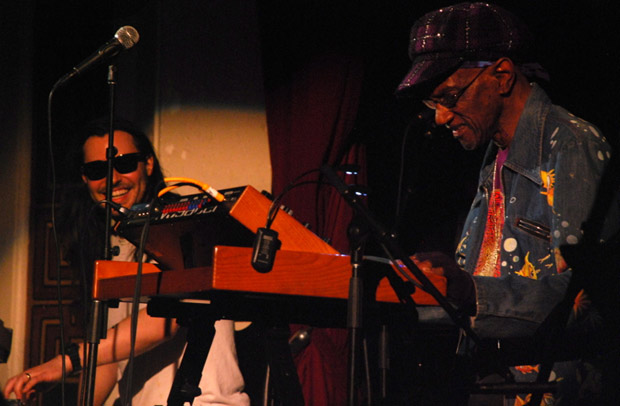 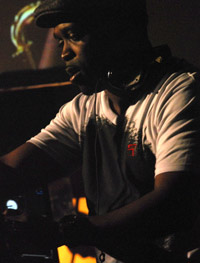 After that, things returned to the experimental jazz as Glenn Kotche (of Wilco – QRO live review) took up the skins with Worrell, and then cellist Erik Friedlander joined Kotche (who moved from sticks on tom-toms to hands on cymbals).  The highlight of the evening for jazz fans was probably keyboardists Vijay Iyer and Robert Glasper, though maybe the artist best at working with others in Duets framework was the subsequent DJ Spinna, who slid in easily first with Glasper, then saxophonist Don Byron.  The last big star of the night was violinist (and whistler) Andrew Bird, who did tend to dominate the stage when paired with either Byron or later saxophonist Joe Lovano.  When Bird left the night seemed done, but Lovano still closed out all on his own.

As an experiment, the ‘Round Robin Duets’ were ambitious and did what they set out to do, even if they were never exactly revelatory.  There was no ‘oh my God’ moments, no instance of blessed serendipity where two artists moved in perfect sync (and certainly no perfectly synced handovers – one felt for the overworked stage tech who had to head out there before every performer).  It did nicely create a bridge between older New York experimental music devotees and younger Brooklyn hipster artists.  And it exemplified what the avant-garde accessible Red Bull Music Academy and Undead Music Festival are all about. 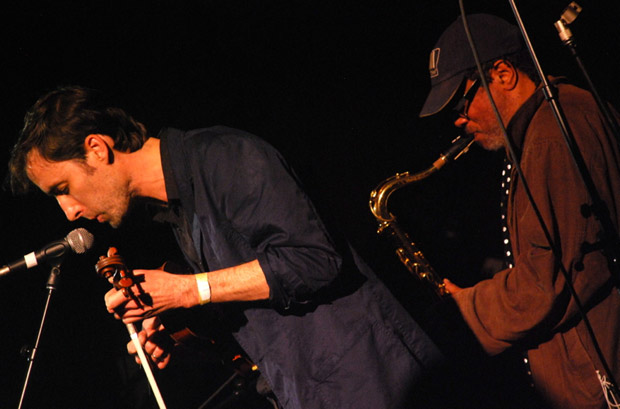