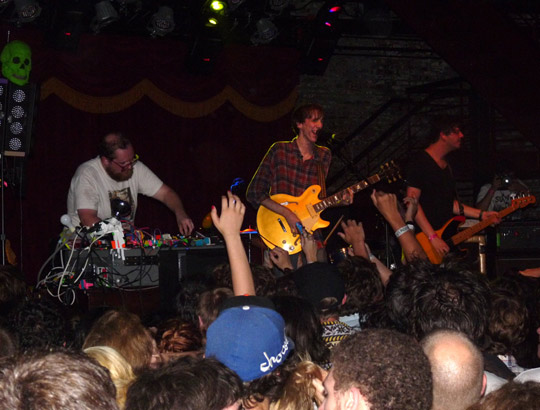 DIY shows, and the ethos behind them, take a lot of knocks, and not just for their natural rickety grunginess.  A lot of people don’t like the all-ages crowds that go to such events, especially for them being cheap & out of control.  A lot of people also don’t really like the bands that play such shows, which are often long on energy, but short on skill.  Everything can go wrong in a million ways.  And everyone can be kind of preachy.  But they also have distinct advantages, even ways of turning the above minuses into pluses, like Dan Deacon, Deerhunter, and No Age did for their ‘Round Robin’ show in Brooklyn on Sunday, August 2nd.

Originally scheduled as one of the ‘Pool Party’ shows (QRO Festival Guide) that have been moved this year from McCarren Park Pool (QRO venue review) to Williamsburg Waterfront (QRO venue review), rain brought the NY State Parks Dept. to close down the Waterfront at around 3:00 PM – just when the first opener was supposed to go on, and right when the skies started clearing up (notably tight-fisted folks).  But the event organizers, JellyNYC, had a backup, as they moved the show to nearby new venue/bowling alley Brooklyn Bowl, with doors at 6:00 PM.  Jelly had access to Brooklyn Bowl that night because that’s where they’re holding their Pool Party after-parties, and when rain had forced the cancellation of Friday’s South Street Seaport (QRO venue review) show, Brooklyn Bowl had taken in that concert (QRO event listing) – so it was all lined-up. 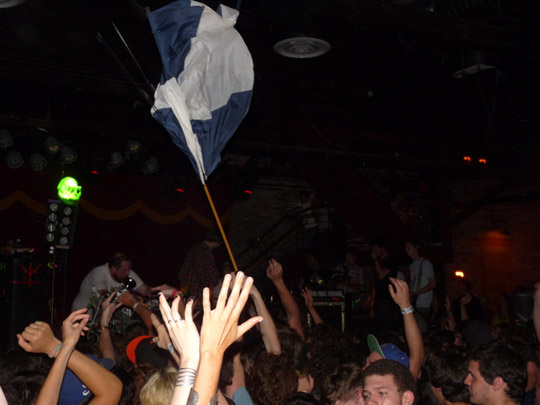 Not that it didn’t still create massive headaches.  There was the line of people at Williamsburg Waterfront, standing in the rain, who eventually got wristbands for the much smaller Brooklyn Bowl – while they lasted.  There was the late notice on everything from the Waterfront shutting down to when Brooklyn Bowl opened to that you needed a wristband to get in (a lot of folks went straight from the Waterfront to the nearby Brooklyn Bowl – only to wait & wait).  There was the confusion of lists & wristbands, and a cluster-fuck of people when doors actually opened – some people waited, some probably didn’t get in, and some just walked right up to the crowd at the entrance and wormed their way through.  And once in, one had to be wondering whether it was worth any of the trouble.  Before the first opener even took the stage, there was a packed all-ages crowd in front of the not-so-high stage.  There were three openers, meaning you were going to have to wait a while for the headliners – and the first two, Infinite Body & White Rainbow (QRO photos), were each just some guy sitting on the floor of the stage (and thus completely invisible, blocked by the crowd), playing some tech gizmos.

Yet things really turned around.  Main opener Ed Schrader (QRO photos) was also just one guy, but he stood up, playing a standing drum, making him actually visible – even took his shirt off (like any drummer should…).  There were also drink specials, courtesy of the night originally being booked as an after-party, making some beers actually cheaper than at Williamsburg Waterfront.  Brooklyn Bowl also kept the show all-ages, something they hadn’t done on Friday.  But the main bonus was that Dan Deacon, Deerhunter, and No Age all agreed to do two shows that night, an early & late, to accommodate all the people who would have gotten in at the Waterfront, but couldn’t fit into the smaller Brooklyn Bowl. 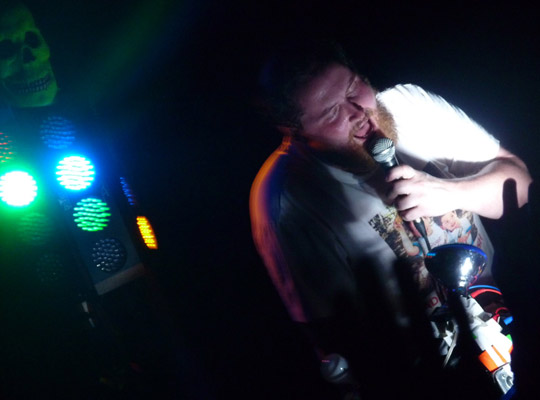 Click here for photos of Dan Deacon at a late show at Bowery Ballroom in New York, NY on May 16th, 2009 in the QRO Concert Photo Gallery

But that’s the nature of Dan Deacon’s DIY ethos.  Already known for being a do-it-yourself concert promoter back home in Baltimore (kind of their own Todd P), his interactions with the crowd is legendary, including playing whole sets of his hyperspeed dancetronica from the stage floor, and leading the audience in group activities like a giant Simon Says (with someone from the crowd, not Deacon, as the ‘Simon’).  And now came his ‘Round Robin’ show, where he & other bands, all on stage at the same time, trade off playing songs, as well as joining in on each other’s.  For that, he enlisted friends No Age & Deerhunter. 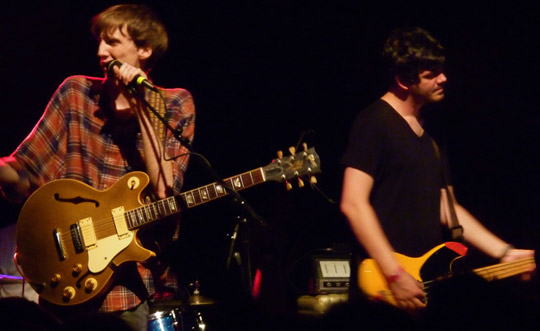 However, live, the three have a lot more in common, thanks to the predilection of each for wild, wild shows – especially when all-ages.  Deacon made his name with crazy live shows, No Age just naturally gets them, and Deerhunter works their way to it – often by playing shows with crazy bands like those two (or at least year’s Pool Party, with last week’s Pool Partier – QRO live review – Black Lips – QRO photos).  While the stage at Brooklyn Bowl wasn’t that high, it was wide enough to fit all three acts (helped by Deacon going solo, and No Age being just a guitar-and-drums duo), and one could see them all.  What’s more, their music worked together better than you’d have expected, as they all sort of bled together – No Age (at the house-left) more electronic, Deacon (in the middle) more rock, and Deerhunter (at the house-right) more alive.  Sometimes certain acts really took over, like when Deacon started organizing the crowd, or when No Age’s guitarist decided to join the crowd-surfers – while still playing… 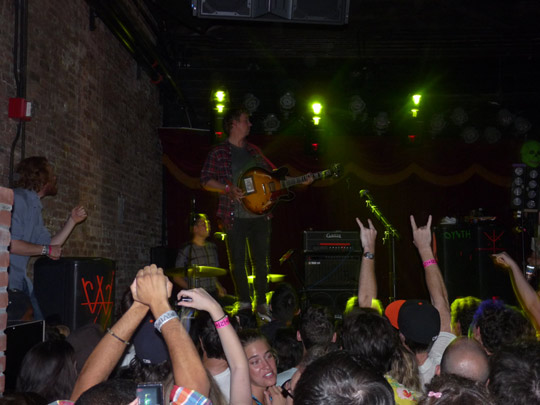 Click here for photos of No Age at 2009 Fun Fun Fun Fest in Austin, TX in the QRO Concert Photo Gallery

Less a show, more an ‘event’, it was still very DIY, right up to the finish, when Deacon pleaded with the crowd to exit as quickly as possible, so that the late show crowd, waiting outside, could get in & that show could start as soon as possible.  But you didn’t have to be a kid in the thick of the pit to enjoy the ‘event’ – even other musicians like YACHT’s Jona Bechtolt & Claire L. Evans (QRO interview), most of Los Campesinos! (QRO spotlight on), and both Matt & Kim (QRO spotlight on) were enjoying themselves as well (less interested?  The too-old guitarist from the sucks-too-hard noise outfit These Are Powers – QRO album review).  DIY shows might have their problems, but they’re also uniquely able to overcome them.