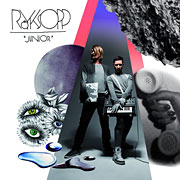 On their third album, Norwegians Röyksopp drop a near-masterpiece that’s full of spectacular melodies, infectious grooves, and an eye-opening collection of Scandinavia’s best female vocalists.  Junior, the counterpart of Senior (to be released later this year), is the duo’s liveliest album yet – its extensive energy and range are a leap from their previous efforts.

With roughly a half-dozen potential singles led by the initial one, "Happy Up Here" (which features a sample from Parliament’s "Do That Stuff"), Junior is a wide-reaching collection of hip-rocking electronics and brilliant vocal deliveries.  "Happy Up Here" kicks it off with a signature Röyksopp bounce before the darker, angled "The Girl and the Robot" driven Robyn’s desperate pleas.  Then after the twisted flow on "Vision One", "This Must Be It" is a pulse-pounding gem that finishes up a powerful opening third of the album.

Swedish sirens Robyn, Karin Dreijer Andersson (The Knife, Fever Ray), and Lykke Li give inspired accompanying performances on Junior, joining the familiar voice of Norway’s Anneli Drecker, who has collaborated with Röyksopp in the studio and on the stage. Lykke Li’s tender effort on the shimmering "Miss It So Much" is gorgeous while the edgier Dreijer Andersson-led "Tricky Tricky" pushes the duo’s sound forward with raw strength.  Each of Drecker’s tracks, notably "You Don’t Have a Clue", are all wonderful matches of her effortlessly charming vocals and Röyksopp’s seemingly magical electronics.

As Junior finishes on an inclining level of intensity, it becomes clear that the two Norwegians are masters of their presentation.  "Silver Cruiser" is a calm, flowing instrumental that leads into the electro-hop of "True to Life".  The last track, "It’s What I Want" is a piano-driven romp with some of the duo’s most engaging vocals and memorable refrains ("It’s what I want/That’s easy/It’s getting it/That’s complicated").  It’s the exclamation at the end of the statement.

It’s hard to be surprised by Röyksopp’s accomplishments on Junior considering the important role they’ve shared in electronic pop over almost the last decade.  But Junior greatly ups the ante on their contemporaries, and gives their audience something to cheer their loudest about to date.