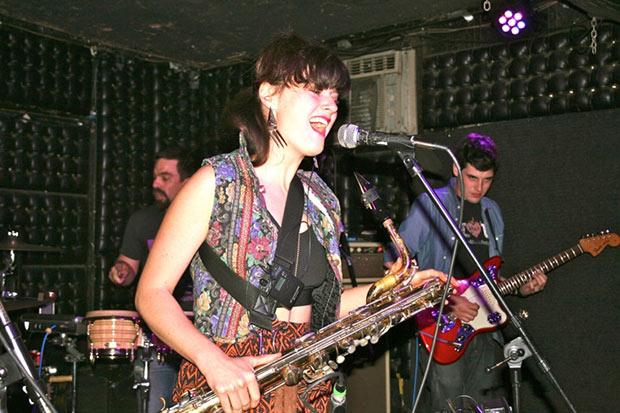 Click here for photos of Rubblebucket at The Bishop in Bloomington, IN on October 8th, 2013 in the QRO Concert Photo Gallery

Click here for photos of Rubblebucket at 2012 Camp Bisco in Mariaville, NY in the QRO Concert Photo Gallery

Click here for photos of Rubblebucket at 2012 High Sierra Music Festival in Quincy, CA in the QRO Concert Photo Gallery

Click here for photos of Rubblebucket at 2012 Wakarusa Festival in Ozark, AR in the QRO Concert Photo Gallery

Click here for QRO’s review of Rubblebucket at Soda Bar in San Diego on November 5th, 2011

Less than six months since their inaugural visit to San Diego (QRO review), Rubblebucket returned on Saturday, April 7th as seasoned road warriors with a new album, Live in Chicago, and accompanying DVD.  Appearing relaxed and joyous, the septet shredded the funky “Silly Fathers” and ethereal “Breatherz (Young as Clouds)”.  In that one-two punch, the band exhibited their dexterity and quirky brand of nouveau new wave at Casbah.

“San Diego, let me see your hands!” shouted vocalist/saxophonist Kalmia Traver.  Hundreds of hands came together clapping as the band testified, swaying behind Traver like a church choir.  The culture clash-clad vocalist asked that the lights be turned down as the band shared a new song, during which the eerie green, black-lit smiles of the audience never dimmed. 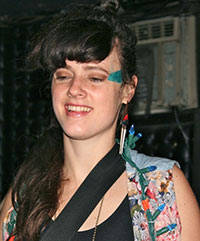 You guys want to dance a little bit?” Travers inquired.  The group then launched into an extended version of Blondie’s “Heart of Glass”, replete with an interlude of Grandmaster Flash’s “White Lines”.  Soulful organ, trombone, and trumpet solos abounded.  Adding to the festivities, a tin-foil-wrapped cardboard alien robot made it’s way through the crowd and high-fived bandleader/trumpet player Alex Toth.

The sexy groove of “Triangular Daises” had couples bumping and grinding.  By this point, anything the band did was golden, so they sprung another new song, “Pain From Love”, on the receptive audience.  “Thank you so much,” Traver beamed, “This is a good night.”  She quickly clarified, “I didn’t say goodnight!”  The horn section came blasting into the crowd as Rubblebucket continued to rock the Casbah with “Came Out of a Lady”. 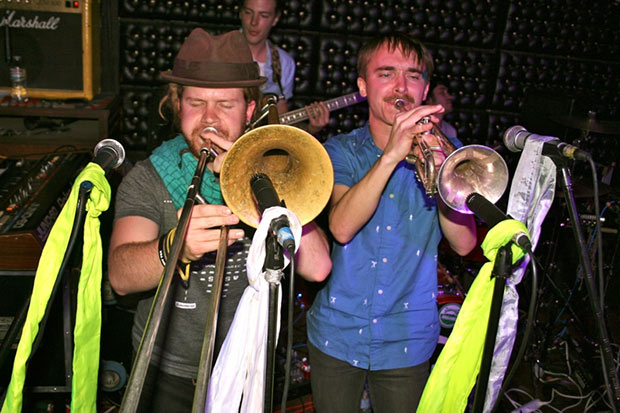