Rufus Wainwright returned to the live stage for two nights of two shows each at City Winery NYC.... 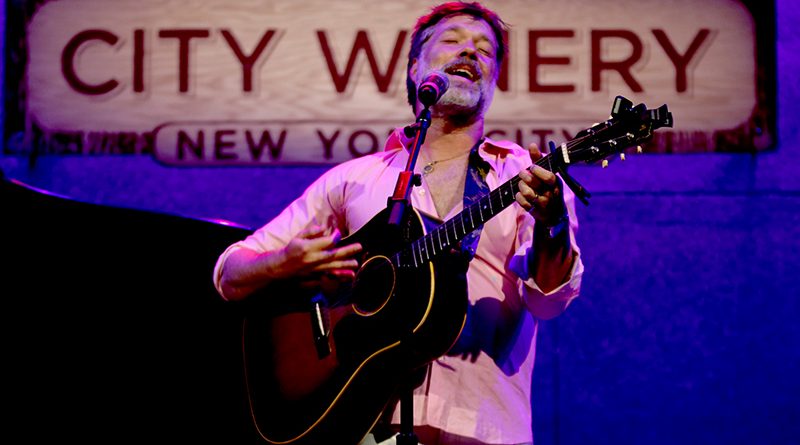 It’s been a long, long year for everyone – so long, no one quibbles that 2020 started in March. So much has happened, so much hasn’t happened, and we all just want to get back to what we hazily remember as ‘normal.’ Yet slowly if not surely, the before-time is coming back, if in fits & starts. Hopefully you’re getting vaccinated, and you might even be getting outside again, whether seeing your family & friends or live music. Rufus Wainwright returned to playing to in-person crowds at the new City Winery NYC on Tuesday & Wednesday, April 6th & 7th.

Not that Wainwright hadn’t been playing to online crowds (and a few in-person celebrities). Last fall (QRO live review) and this spring (QRO live review), he had his ‘Rufus-Retro-Wainwright-Spective’ livestreams on Fridays, where he played his entire catalogue to fans from around the world and a special celebrity guest on his couch (ranging from Jamie Lee Curtis to Paul Rudd & more), from his Laurel Canyon home. He also did a special holiday benefit livestream with his extended musical family (QRO live review), and a livestream performance of his new album, Unfollow the Rules (QRO live review). Indeed, there were probably fewer musicians who were busier this long COVID year.

But that’s still not actual live shows. Wainwright is one of the first to go on a real-life tour, playing basically solo across the country, including at a number of City Wineries. Michael Dorf’s original wine-meets-music venue had to close thanks to redevelopment (QRO venue review of old place) after becoming a franchise, but opened a new & improved location on the Hudson River (QRO venue review). This location has been one of the first to open to ticketed concerts on the Saturday prior (QRO live review), thanks to the restaurant already being open, the new space having the literal space to spread out, and a clientele willing to go out & spend.

But in case you aren’t in New York (or couldn’t go out), a number of the City Winery shows are being livestreamed on Mandolin, including Wainwright’s. He actually played four shows over the two days, an early & late.

[note: because your correspondent has come to love Rufus Wainwright over this last year, and because he so missed asking to get on lists, he managed to both see the Tuesday early show livestream and the Wednesday late show in person]

Each night, the two shows were broken out into roughly ‘early’ and ‘late’ Wainwright, his older material in the early show, newer material in the late show, though the songwriter noted that his newer material was actually the “old Rufus.” Doing the ‘Rufus-Retro-Wainwright-Spectives’ has brought Wainwright to reappreciate his older and even newer-but-not-new material. And while there were some songs played both early & late, the variation was particularly nice for his superfans who might be watching both shows on a day (whether in-person or through Mandolin).

For the early show on Tuesday, Wainwright played some very old songs, such as “Beauty Mark”, which he noted was written for his late mother, famed singer Kate McGarrigle, after she’d heard his first stuff and said it was “terrible.” “Danny Boy” was about his first love, while “Liberty Cabbage” was the “first true Rufus Wainwright song,” written when he was living in the U.S. for the first time. “April Fools” Wainwright dubbed, “My first could-have-been-great-hit,” noting that the video had Gwen Stefani, who let them shoot the ending in her mansion, “And I’ve never heard back from her since…” He was a little rusty with a few pieces, such as messing up & restarting “Poses”, but oh-so-charming when he did it.

While usually alone on stage on either piano or guitar at City Winery NYC, each night also featured at least one guest star. For Tuesday night, it was Joan Wasser, a.k.a. Joan As Police Woman. After a beautiful introduction (Wasser joked that, from Wainwright’s glowing intro, she thought Liza Minnelli was there), Wasser played a piece of her own solo, “The Start of My Heart”, before Wainwright returned for them to team-up on Elliott Smith’s “Between the Bars”. It was a really nice surprise to vary out the evenings (and give Wainwright a one-song break).

For the back half of the early set, it was “New Rufus,” as this is the first tour Wainwright has been able to do off of last year’s Unfollow the Rules (QRO review)). There was the lovely “Only the People That Love” and “On a Peaceful Afternoon”, the latter dedicated to his husband Jörn Weisbrodt – but Wainwright noted that he ripped it off of the next piece he played, Leonard Cohen’s “So Long, Marianne”, “I ripped off Leonard Cohen – but who hasn’t?” Indeed, Wainwright has more of right to Cohen than most, having done one of the best covers of Cohen’s much-covered “Hallelujah” (also well covered by Wasser’s late fiancé, Jeff Buckley) – and Cohen’s daughter Lorca is the mother of Wainwright’s daughter Viva! [something your correspondent only just discovered that night]

Other Unfollow pieces included the wreckage of America that is “Going To a Town” (“It’s great not to have to talk about you-know-who. I’m still gonna sing this song, though…”) and “Alone Time”, which Wainwright noted that he wished Tina Turner could have sung, or Patti LaBelle, the latter of whom did say it was beautiful, before adding, “It makes me want to fall asleep…” (she heard it on an airplane). And it was actual “Hallelujah” to close the night, Wainwright returning for an encore with Wasser.

For the late show on the second night, Wainwright leaned into more recent material such as “Out of the Game” from the 2012 album of the same name (QRO review), noting that he thought having Mark Ronson produce that record would make it a big hit. There’s always been a subtle undercurrent of Wainwright wishing/thinking he could be bigger than he is, not disparaging what he has and particularly his fans, but he is just so well-suited to being a big pop star. There were also two brand-new, yet-to-be-released songs (because Wainwright has also been writing this last year), “Hollywouldn’t” (total Wainwright pun) and “Luxembourg” (“I’m fascinated by it, but I hope I never end up there…”).

Then came not one, but two special guests, both of who were family. First was his sister Lucy Wainwright-Roche, a singer in her own right that Rufus noted he “launched,” which involved getting her to dress as Judy Garland for one night, and Liza Minnelli for a whole tour. Lucy was playing her first show since the pandemic, doing her own “Soft Line” and then joining her brother for “Pretty Things”.

Also in attendance (both on stage and in the balcony maybe twelve feet from your correspondent) was their father Loudon Wainwright III. The rambunctious folkster hasn’t lost his energy with age, or his wit, delivering a very new song that he wrote the day before, an a-cappella birthday song for his girlfriend “Suzy Q”, also in attendance, Loudon slapping his thighs for a beat. Rufus actually stayed on stage to watch that, and then surprised by leading all of City Winery NYC in a rendition of the actual “Happy Birthday” song.

Like in the early show on the first night, the post-guest back half of the late set was mostly dedicated to Unfollow, including “Peaceful Afternoon”, “Going To a Town”, and “Alone Time”. There was also Cohen’s “Marianne” again, Rufus apologizing that it was part of three songs all done in the same key. Indeed, he would play a few notes of something else in between just to give a “chordal palette change.” And Cohen’s “Hallelujah” returned once more for the encore return, this time with Lucy.

The livestream and in-person shows were obviously different experiences. The livestream allowed one to talk with others without talking over Rufus or breaking social distancing; indeed, many of the fans from Rufus’ livestream series were in chat once more, such as Clara from Madrid. Mandolin and City Winery NYC had great lighting, sound, and camera angles, even if the shows couldn’t be replayed afterwards – European fans were dismayed that the late shows started 9:30 PM EST – so 2:30 AM GMT…

But, as we’ve all learned this last year, livestreams still can’t replace in-person shows (though, in this case, were well cheaper). City Winery NYC had their socially distanced seating game down pat (though Dorf noted, “Don’t get used to [it] – we’re gonna pack ‘em in…”). In just their first week of shows, the place & staff is still getting their sea legs a bit (they’re out of one of their two draft beers – but it is a winery…). And one just appreciates all the little things of live shows so much more now.

Who knows when we’ll get back to something like normal. It seems like a lot of artists and festivals are scheduling their return for this fall, even creating a ‘touring arms race’ – be ready for your favorites to all be on the road at the same time (hopefully not the same night). But of course, it would be one of the hardest working musicians of the COVID year at home, Rufus Wainwright, to be one of the first back on the road again.