Leave it to Rufus Wainwright to bring his delayed new album 'Unfollow the Rules' to us in the most charming and classy way possible... 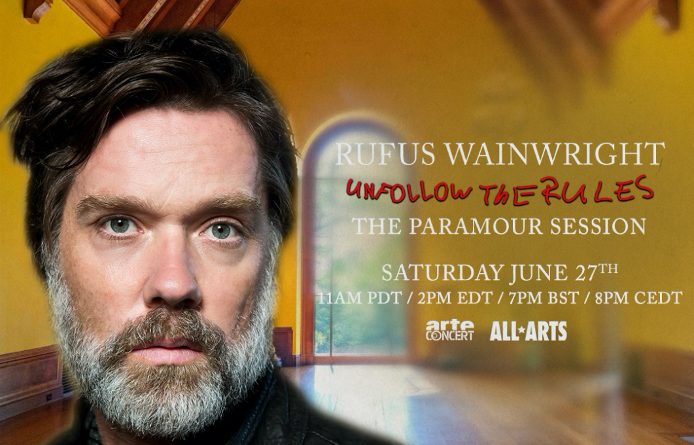 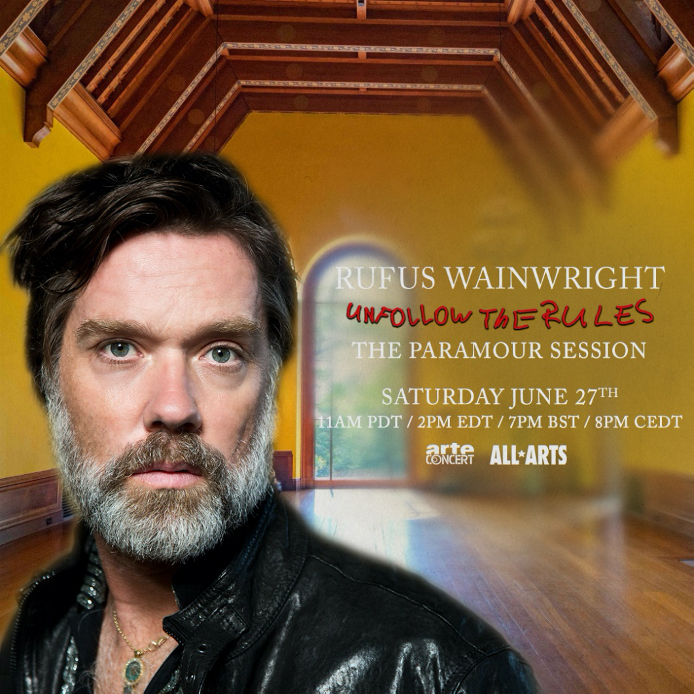 We’re having to settle into the ‘new normal’, of masks and quarantines, social distancing and no live events.  Oh, and there’s a worldwide protest movement going on, against a slate of populist idiot leaders.  Nobody and nothing is untouched, and we’re all just trying to figure it out.  Leave it to Rufus Wainwright to bring his delayed new album Unfollow the Rules to us in the most charming and classy way possible, as he did a livestream from The Paramour Estate in Los Angeles’ Silverlake on Saturday, June 27th.

Wainwright’s new record was supposed to be out in April, and he was supposed to be on tour right now, but we all were supposed to be doing other things right now.  Instead, it has been delayed until July 10th, and instead of a tour, he and his band did Rufus Wainwright’s Unfollow the Rules: The Paramour Session.  It was eleven AM Pacific Time, to make it evening in Europe, and gave the whole event a sunnier feel in these dark times.  Wainwright was accompanied by Brian Green (guitar and music director), Jacob Mann (piano and celeste), and string quartet of Rebecca Schlappich Charles (violin), Eliza James (violin), Jayna Chou (viola), and Danica Pinner (cello).  It premiered on ARTE Concert in Germany & France, and ALL ARTS’ Facebook in the U.S. & elsewhere.

For the performance, Wainwright & his band were dressed in stylish kimonos, and all but him were wearing a mask, as he explained there wasn’t a mask one could sing in (yet).  Indeed, the masks said “UNFOLLOW THE RULES” on them, which even Wainwright didn’t quite know what that meant.  They were also socially distant in the gorgeous space, and in between some songs there would be sweeping footage of it, the former home of silent film star Antonio Moreno.

While focused on Rules, Wainwright & co. began with a musical “get well,” and then “Sword of Damocles”, his 2018 single inspired by the mid-terms – after having first heard the term from Carrie Fisher, as Wainwright explained.  Throughout the concert, Wainwright would give a little backstory to just about every song, showing off his engaging stage persona, as well as making the performances & songs more personal.  “Trouble In Paradise” was written initially with iconic Vogue editor Anna Wintour in mind – and Wainwright has no idea how she feels about it.  “Damsel In Distress” is for his current Laurel Canyon home and its musical history.  The wry “You Ain’t Big” is about the music industry, and needing to be big in places like Alabama, like Elvis.  There was a song for his husband Jörn Weisbrodt (“Peaceful Afternoon”), and one for his female fans of a certain age, the “Rufettes” (“This One’s For the Ladies (That Lunge)”).  His daughter Viva Cohen gave Wainwright the line that became a song & the album title, and got her own dedication in “My Little You”.  “Early Morning Madness”, on the other hand, was written ages ago when he would get hungover, but still holds for today.  Early Unfollow single “Alone Time” was eerily, but beautifully, prescient.

Between some songs, we got pieces of Wainwright talking about everything from his love of Old Hollywood to practicing for this as the Black Lives Matter protests broke out.  Just in those, he was the most charming guest at your dream dinner party, grand but also self-effacing.

Who knows when we’ll have in-person live music again, and nothing can really replace them (the next big thing seems to be drive-in concerts…).  But Rufus Wainwright’s livestream of his new Unfollow the Rules at the Paramour Estate was a lovely way to spend some time in lockdown.