Rufus Wainwright embraces his grand soul-pop with a smile. ... 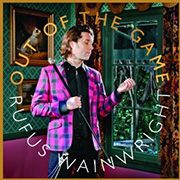 Rufus Wainwright has seemingly always tried to be something more, from gay rights activist to writing his own opera.  Unfortunately, this can sometimes work against him in his actual studio albums, when ambition and imagination outrun production.  But with Out of the Game, Wainwright embraces his grand soul-pop with a smile.

Out of the Game is captured by the title track/lead-off song (unsurprisingly), a relaxed and enjoyable soul-smooth pop.  Most, but not all, of Game is of this more relaxed style, as Wainwright uses his charm to win over on pieces like “Out of the Game”, “Barbara”, “Respectable Dive”, and especially “Montauk”, a particularly enjoyable croon about visiting “your dad and your other dad” at the far end of Long Island.  Game can lack for depth at times, such as the somewhat over-the-top “Rashida”, but it’s always nice.  Wainwright doesn’t completely abandon his sad side, with the wistful strings “Sometimes You Need” and especially the slow, sad, grand coda-closer, “Candles”.

For Out of the Game, Wainwright worked with celebrity DJ/producer Mark Ronson (QRO photos) for a record Wainwright’s called more danceable, and he’s not wrong.  To put together some nice music, all he has to be is himself.