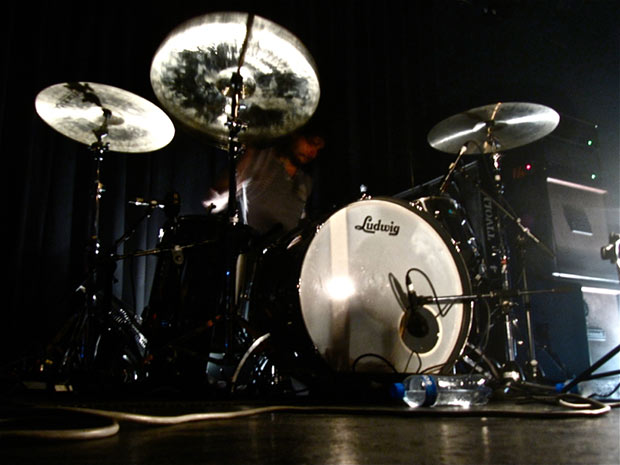 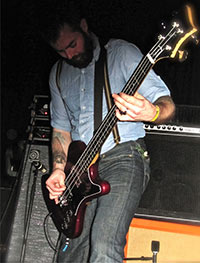 Post-rock, whatever it means, has never been the kind of music known for its immediacy.  Bands like Mogwai (QRO live review), Yndi Halda, Explosions In the Sky (QRO live review), Russians Silence Kit, Red Sparowes, or And So I Watched You From Afar all make and play fantastic music, but it’s really hard to find songs, in plural, that stand out in their repertoire for being forthright and direct, like a smack in the gob (the only one that comes to mind is Mogwai’s “San Pedro”).

But Chicago’s Russian Circles are trying to put a remedy to that with the record they’re promoting these last months, Empros, praised by almost everyone in the civilized world (and in the uncivilized as well) as a new milestone in their genre.

The busy Utrecht venue Tivoli de Helling hosted the Dutch stop of Russian Circles current tour on April 21st.  As support band, Californians Deafhaven displayed an amalgam of screamo, metal, post-rock, and shoegaze that – apart from the screamo – sounded pretty cohesive and dense.  The different styles they mix give them plenty of room to evolve and widen the palette of sounds of the songs from Roads to Judah, their first record.

Russian Circles changed the mood of the venue after Deafhaven using a set of four white lights for the whole gig, like reminding that legendary quote by Bauhaus, “Coloured lights are for Christmas trees.”  Also, the band quietly took the stage backed by ambient music and started with “Carpe”, the opening track of their second record, Enter, a tasteful blend of rock and sparse dissonance.  Here, the band displayed one of their most notable features: an incredibly tight rhythm section and a guitar that fluctuates between melancholy and anger.

It may seem that being a trio simplifies the work each band member has to do onstage and it might be true in certain genres but Russian Circles want to sound expansive, big, dark, brooding, electrifying and tense and, even thought it’s difficult to dissect their style in well-defined compartments, they take two ways to do so: on the one hand, they use all their technical prowess – in songs like the blunt “309” or the edgy “Geneva” – and on the other hand, their imagination – on tracks like “Mlàdek”, “Youngblood” or the immense “Batu”. 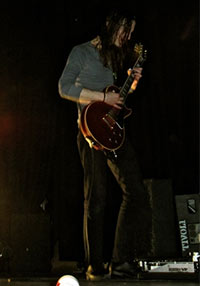 At first it seems that putting together the terms “technical prowess” and “imagination” in the same sentence is an oxymoron, but this is where Russian Circles wanted to get, a place where a killer technique can express darkness and desperation and where imagination means to get rid of all the blank exaggeration of heavy metal and thus being able to get to places the prowess never gets you to.  And that’s why Russian Circles are a bit in a field of their own in the ‘post-whatever’ world.

The band completed a fantastic gig playing with the aforementioned elements, without losing an inch of their identity and bearing in mind their second bass player for this tour couldn’t play as he recently broke a finger.  In words of drummer Dave Turncrantz, “We’re just playing the songs we can the way we can, so it’s a bit tough.”