You might know Sean Carey best as the drummer from Bon Iver, but he is slowly and surely making a name for himself as a solo artist....
by Jayson Berray March 27, 2014 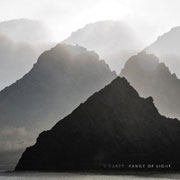 You might know Sean Carey best as the drummer from Bon Iver (QRO live review), but he is slowly and surely making a name for himself as a solo artist.  His second full-length album Range of Light proves that and then some.

Recorded at Justin Vernon’s Wisconsin April Base Studios over the course of a couple years, it is highly apparent from the first note of opening song “Glass/Film” to the last of closer “Neverending Fountain” that this was a deliberate labor of love with much attention to detail.  Side note, keep an ear out for Vernon providing backing vocals on some of the tracks as an added treat.

Click here for photos of S. Carey at 2014 Boston Calling in Boston, MA in the QRO Concert Photo Gallery

Click here for photos of S. Carey at Music Fest NW 2010 in Portland, OR in the QRO Concert Photo Gallery

An easily noticeable element of Range of Light is the instrumentation.  It is anything but simple, probably resulting from the fact that Carey holds a degree in Percussion Performance.  Many songs, such as “Crown the Pines”, have to be listened to several times through to pick out everything that is going on.  There are multiple types of percussion, several types of strings, and piano, among others.  It is song craftsmanship like this that gives an album depth and replay value.  It becomes easy to see why Sean Carey is such a valued member of Bon Iver and collaborator with Justin Vernon.

Range of Light is a pensive yet hopeful record.  Songs like “Alpenglow” or “Neverending Fountain” have an air about them that is melancholy but at the same time encouraging.  Again, it all adds complexity to an already-intriguingly-crafted collection of songs.  Without making this all about Bon Iver, it has become easy to see that they are anything but Justin Vernon and a bunch of backing musicians, they are a collective of equally talented musicians.

Here’s hoping that there isn’t another four-year break between Range of Light and Sean Carey’s next studio album.  Until then, retreat to a cabin in the woods next to a river, put this record on, grab a beer, and enjoy life.