Thousands upon thousands of people, Coors Light in hand, descended on the world-famous Gorge Amphitheater in The Middle of Nowhere (George), Washington for the behemoth Sasquatch! Music Festival.... 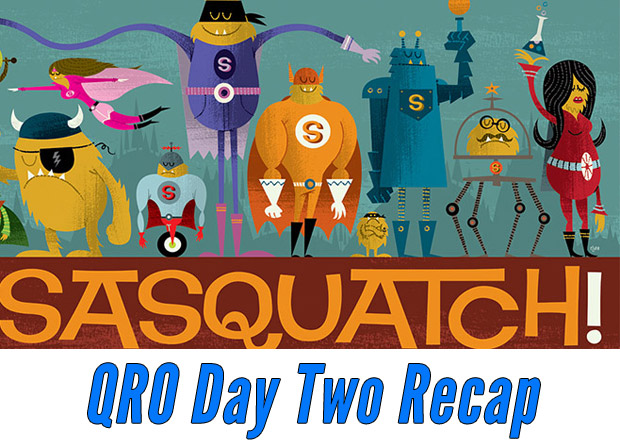 Thousands upon thousands of people, Coors Light in hand, descended on the world-famous Gorge Amphitheater in The Middle of Nowhere (George), Washington for the behemoth Sasquatch! Music Festival taking place over Memorial Day Weekend, Friday to Monday, May 24th through the 27th.  Many people have argued that this year’s lineup, featuring the likes of Macklemore & Ryan Lewis, Mumford & Sons, Sigur Rós, and The Postal Service to name a very few, is the best it has ever been.  Not to mention, the scenery at this festival may just be better than any other festival our fine country has to offer.  Unique to the Pacific Northwest, festival goers hailing from the region come prepared for both rain and shine as both literally can occur within minutes of each other.  Cans of beer cost $11, margaritas cost $14, and many, MANY people are smoking weed.  Yep, it’s a festival all right.  Good thing there are tons of great bands to keep us entertained.

Click here for photos of Suuns at 2012 Le Guess Who? Festival in Utrecht, Netherlands in the QRO Concert Photo Gallery

Click here for photos of Suuns at 2011 Primavera Sound in Barcelona, Spain in the QRO Concert Photo Gallery

Click here for photos of Suuns at 2011 Music Fest NW in Portland, OR in the QRO Concert Photo Gallery

Click here for photos of Suuns at 2011 Osheaga Music Festival in Montreal, PQ, Canada in the QRO Concert Photo Gallery

Click here for photos of Suuns at TT the Bears in Boston, MA on November 3rd, 2010 in the QRO Concert Photo Gallery

Montreal’s Suuns are a band worth keeping an eye on.  They are a great blend of electronica and rock.  Like many acts these days, they don’t actually have a bassist, but rather a guy who plays a menagerie of synths and samplers, which can often widen the range of sweet things you can hear when they perform.

They helped kick off day two of the mighty Sasquatch! Festival by playing the hardcore festival goer-packed Yeti Stage.  Many acts have proved themselves on this stage and have been asked back to play the main stage in following years.  Many of the songs that made up their set were from their recent Images Du Futur, such as the ever catchy yet haunting “2020”. 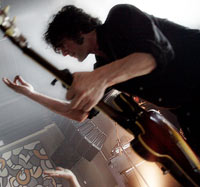 Black Rebel Motorcycle Club are scary.  Don’t worry; they are scary in a good way.  Co-singer and bassist Robert Levon Been actually snuck out into the crowd undetected towards the front of the stage to seemingly stand there and survey the situation before the trio took the main stage midday Saturday, all dressed in black leather (of course…).  Hayes then proceeded to wear a black hood for the entirety of the performance.  Rebels, indeed.  To be honest, it didn’t look like they really even wanted to be there, but sometimes the greatest performances are born from such situations.  They were there to get down and bring their particular brand of straightforward dirty rock to a surprisingly packed crowd.

Songs played were all fan favorites such as “Berlin” and “666 Conductor”.  Of special note was the group’s newest member.  Even though she’s been a part of the band for about five years now, Leah Shapiro was a commanding presence behind the kit as she laid the heavy-hitting foundation for the group’s performance.  No offense guys, but let’s face it: female drummers are just awesome. 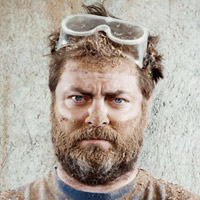 This performance could quite possibly be the highlight of the entire Sasquatch! Festival.  I mean, who doesn’t love Ron Swanson?  That persona has infused itself into Nick Offerman’s being so much that a fan near your correspondent who was wanting an autograph actually yelled out, “Ron!… I mean Nick!  Can I have your autograph?”  Don’t think Nick/Ron heard, otherwise this joker may have gotten the famous Offerman stare down.

As far as his performance goes, it had a bit of everything.  He walked on stage shirtless to wild cheers from the crowd and said, “You were promised moderate nudity, and that has been fulfilled.”  To make things better, he then clothed himself in an American Flag button-up shirt that only he could pull off wearing while actually looking semi-cool.

The stand-up performance took place in the Chupacabra Stage, comprised of “Nick Offerman’s Ten Tips For Prosperity.”  Some of which were, “Engage in romantic love,” “Say ‘Please’ and ‘Thank You,’” “Have a hobby or a discipline,” and, you guessed it, “Eat red meat.”  At face value, these don’t necessarily sound that comedic, but he did a great job of interweaving his dry sense of humor into them and making some of them into songs he sang while playing acoustic guitar.

The end of the performance, however, was the true bit to write home about.  Offerman’s wife Megan Mullally (or as she is known on Parks and Recreation, Tammy 2 – formerly of Will & Grace) joined him onstage with her partner and backing band, collectively known as Nancy and Beth, who also performed earlier in the day on the Yeti Stage.  To bid the crowd farewell, the Offerman-fronted collective performed none other than the song “5000 Candles In the Wind” by the incomparable Mouse Rat, dedicated to Pawnee’s own Li’l Sebastian.

Click here for photos of The xx at ACL Live at The Moody Theater in Austin, TX on February 11th, 2013

Click here for photos of The xx at 2012 Primavera Sound Festival in Barcelona, Spain

Click here for photos of The xx at Orpheum Theatre in Boston, MA on October 3rd, 2010

Click here for QRO’s review of The xx at Central Park SummerStage in New York, NY on August 8th, 2010

Click here for photos of The xx at 2010 Sasquatch!

Click here for photos of The xx at 2010 All Tomorrow’s Parties in Minehead, U.K.

Click here for photos of The xx at 2010 Big Ears Music Festival in Knoxville, TN

Click here for photos of The xx, with Baria Qureshi, at South Street Seaport in New York, NY on August 14th, 2009 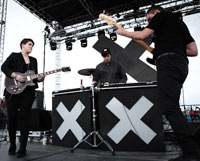 To say the least, a concert experience by The xx is something to behold.  It has this mysterious way of being high energy and intense, yet relaxing and almost coma-inducing at the same time.

The stage setup for the England trio’s main stage performance on Day Two of the Sasquatch! Festival was pretty minimal.  But the lights show was incredible.  Coupled with the dropping temperature as the Saturday sun was setting, it put off a truly icy vibe.

Co-vocalists Romy Madley Croft and Oliver Sim voiced their genuine gratitude at being asked to play the main stage at this year’s festival as a few years ago they were on one of the smaller stages (QRO photos).  All too often when concertgoers are attending a show at The Gorge they (understandably so) keep their attention entirely forward on the stage.  But if you take a second to turn around and actually take in the scope of this venue, it really is something to behold (QRO photos from Sasquatch! 2012).  So from that point of view, it’s easy to see why The xx were so humbled to be playing a stage of such size and scope.

Musically, their songs were incredibly well executed as most of them are highly intricate and involve lots of timing.  The set drew from both of their critically acclaimed albums, xx (QRO review) and the recently released Coexist (QRO review).

The highlight of any performance from these guys has got to be the way that Croft and Sim’s voices blend and flow together.  For as subdued as she seems on stage, Croft is quite the emotionally powerful vocalist.  Their set was a festival highlight, to be sure. 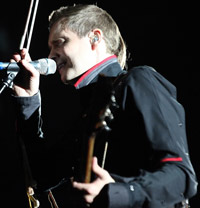 It might sound cheesy to say it, but a performance by Sigur Rós isn’t so much a performance as it is a celebration.  And that is exactly what their headlining set at Day Two of Sasquatch! felt like.  Yes, as festivalgoers always seem to be able to do, they even found a way to dance happily to the often hard-to-find beats of the Icelandic band’s unique, yet easily identifiable music.

They closed out the night playing a hit-packed (if you can refer to their songs as ‘hits’) set consisting of popular songs “Hoppípolla”, “Svefn-g-englar”, and “Glósóli”.  Good luck trying to pronounce any of those.  You’d know them if you heard them, let’s put it that way.

There were almost too many people on stage to count, but in addition to Sigur Rós’ three-core members there were also two auxiliary instrumentalists as well as full string and horn sections.  It might sound excessive, but their music commands that multitude of people in order to be pulled off correctly.  For as intricate as these songs sound on the albums they come from, the performance was spectacularly well executed.  If only there would have some way to shed light on the enormous backdrop of the vast Columbia River Gorge, it would have been a great addition to the ethereal experience that was this performance.  Please, be sure to check Sigur Rós out if you haven’t before and they come to a city near you.  You will not be disappointed.