Get 'Silence Yourself' and blast it on your headphones or your house with the lyric sheet on your hands, and you’ll see....
by Abel Cruz May 9, 2013 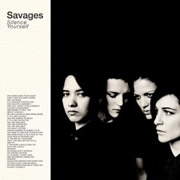 CONS: Very strong song (“Husbands”) but I think this front woman comes across fairly insincere // The vocalist reminds me of Sinead O’Connor, not Siouxsie.  If the band has a weak link, it’s her, I think? // This cut (Husbands) is depressing and malnourished, verging on self-parody // Christ how bloody awful.  (Why does the singer girl not extend the mic stand up a bit?) // Post-punk karaoke…

PROS: I heard their album last night… motherfucker // Finally, something from the ladies (“Husbands”) that kicks my ass // The guitarist is terrific // This is so fucking cool! // This is just stupid great.  I look forward to the album // That awesome feeling when you hear a new band and get so excited you can barely stand it // God they are beautiful // They clearly sing and play from the guts, which can only be good…

All these you see above are quotes and opinions you can find elsewhere on the net, mainly in video sites.  Yes, we are not especially in the era, “I think, therefore I exist,” but rather, “I have Internet connection, therefore I opine.”

So who wins in reality?  In my mind, the pros.  Absolutely.  Really.  Completely.  Utterly.  None of the previous bands since the so-called ‘post-punk revival’ started has been as strong, clear and precise in their debut record.  Even Portishead’s Geoff Barrow twitted several months ago he was absolutely and pleasantly surprised to see these women having a huge fan base without even having their record out.  That must mean something.

Click here for photos of Savages at Saint Vitus in Brooklyn, NY on January 31st, 2015 in the QRO Concert Photo Gallery

Click here for photos of Savages & Bo Ningen at 2014 Le Guess Who? Festival in Utrecht, Netherlands in the QRO Concert Photo Gallery

Click here for photos of Savages at 2013 Beacons Festival in Skipton, U.K. in the QRO Concert Photo Gallery

Click here for photos of Savages at 2013 Optimus Primavera Sound in Oporto, Portugal in the QRO Concert Photo Gallery

Click here for photos of Savages at 2013 Primavera Sound in Barcelona, Spain in the QRO Concert Photo Gallery

Click here for photos of Savages from 2012 Beacons Festival in Skipton, U.K. in the QRO Concert Photo Gallery

Silence Yourself is not the easiest of records.  There’s a lot to take in: Hope, anger, revenge, electricity…  Most of the music people think they have inspired themselves from sound like staying at home while it’s raining outside, whereas the music Savages actually play is like going out and getting soaked to the bone.  It’s fighting, it’s screaming, it’s finding your voice, your place, your love, your sex, your dignity and your path.  This is not Paul Weller, when he was in The Jam, singing, “And if it don’t work / At least we’ll say we tried.”  No.  Some of these songs seem to say, “You have to be yourself and keep your self-respect and self-esteem if you really want to go for it, if your ideas are clear, if you really want to know where to go and how, what do to and when.  And if you’re wrong and fall, stand up again.”  And that’s just the extremely simplistic way of describing Jehnny Beth’s task.

And sonically, this record has way too much work on it to simply be called “post punk karaoke.”  Fay Milton’s drums and Ayse Hassan’s bass work in different levels, either they can be blunt, unpretentious and straight forward, their sounds and melodies evolving and shifting, zigzagging, flickering through the song and add or take out tension… or simply give a subtle platform from which Gemma Thompson guitars – noisy, screeching, piercing, you name it… excellent anyway – and that gorgeous voice full of pain, sex appeal, wetness, anger or anxiety (but never regret) place you in every situation, every alley or avenue.  And when the voice pauses, the bass takes the lead, most of the times.

So is the record any good?  Read the paragraphs above, it’s clear enough.  Alongside The Revival Hour’s Scorpio Red Devil, this is the record of the year so far.  Does it make sense now?  Sure it does.  When did ‘having personality’ become obsolete, useless, pathetic?  Does it bring a new vision on that kind of music?  Absolutely.  One can’t see any of the bands they take ideas from playing this music, this way.

The only downfall of this record is that most of the people who love or hate it overanalyse it.  As it’s been said, there’s a lot of work and examine the whole of may be a healthy exercise, it gives us a lot of background, we learn many things and thus feel the music closer to us.  But music is art and part of its charm lies on the ability to enjoy it straight away, with as few intrusions, interruptions and prejudices as possible.

So get the album and blast it on your headphones or your house with the lyric sheet on your hands, and you’ll see.  Or if you’re not convinced yet, go find the many videos on the Internet, especially the live takes, where you’ll find a pair of gorgeous French eyes brimming with life while they challenge you while singing, “I am here / No more fear / No more dark shadows…”