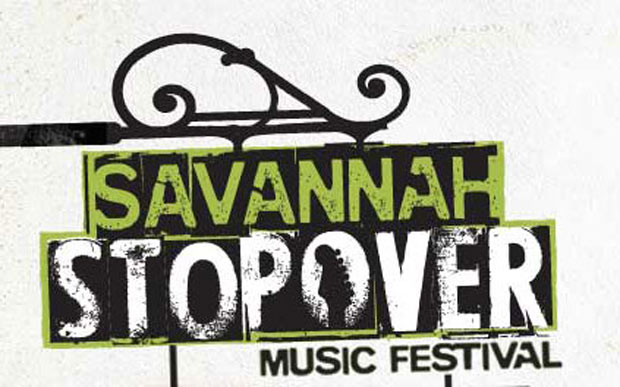 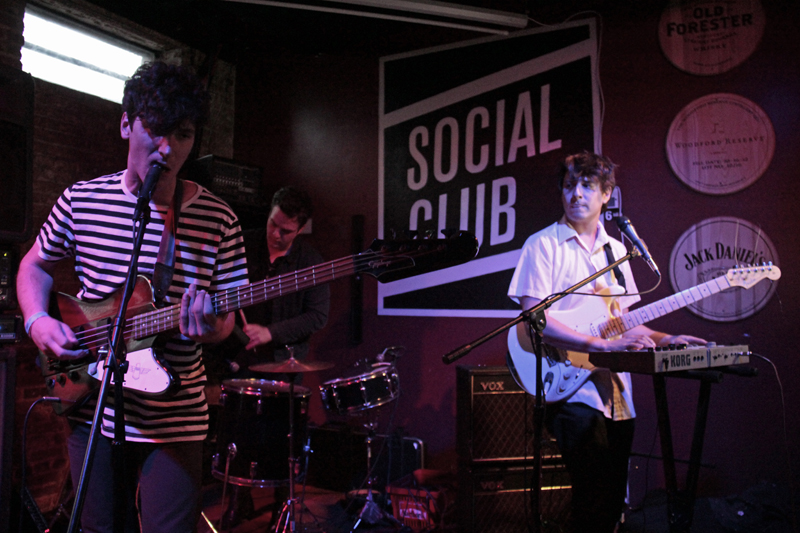 Too bad CBGB is no more, because these three Gainesville, Florida natives would fit in great there. Leaving no room to be genre pegged, Cretin Girls played like seasoned tourists and delivered boiling breakdowns on every track. They pulled a killer set off with no hitches. And the crowd loved it, bobbing and weaving and fist pumping to the beats. 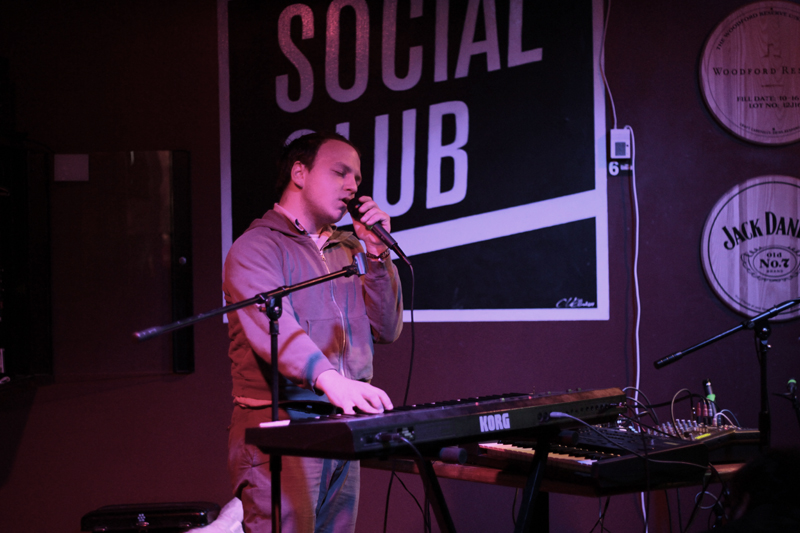 Poignant, fluid, exciting, and funky, similar in style to Washed Out’s DJ sets. About thirty people rode the tempest of this one-man electronica pop band, swaying and bobbing their heads to the rhythmic beats while Z. Jagers sang with a resonant voice that hinted of John Rzeznik (Goo Goo Dolls). He would pair nicely with Atlanta’s R_Garcia band. 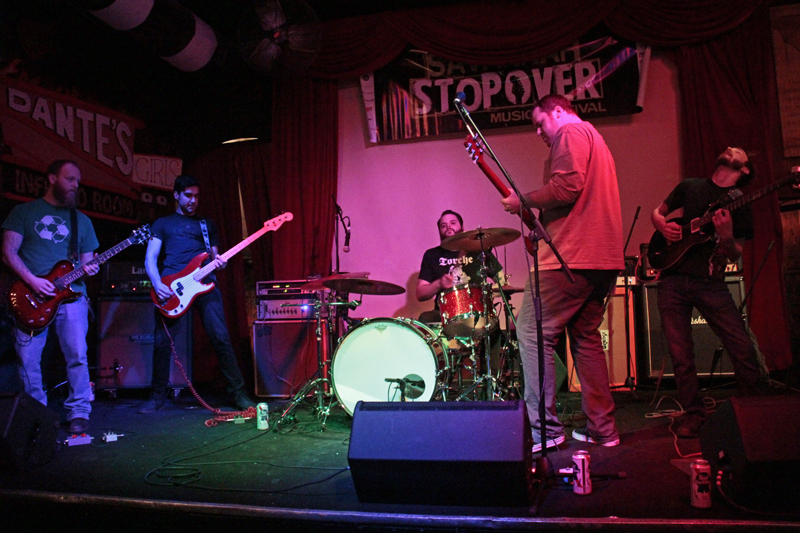 This band is a must see. A Savannah staple, these boys combine five instruments to create an edgy eclectic wall of powerful sound by utilizing an eclectic pedal mixture and a serious drum ride. Bear Fight! transcend multiple genres. So quirky and melodic, yet, sloppy and with a detailed center, they’d fit at an Atlanta show as well. 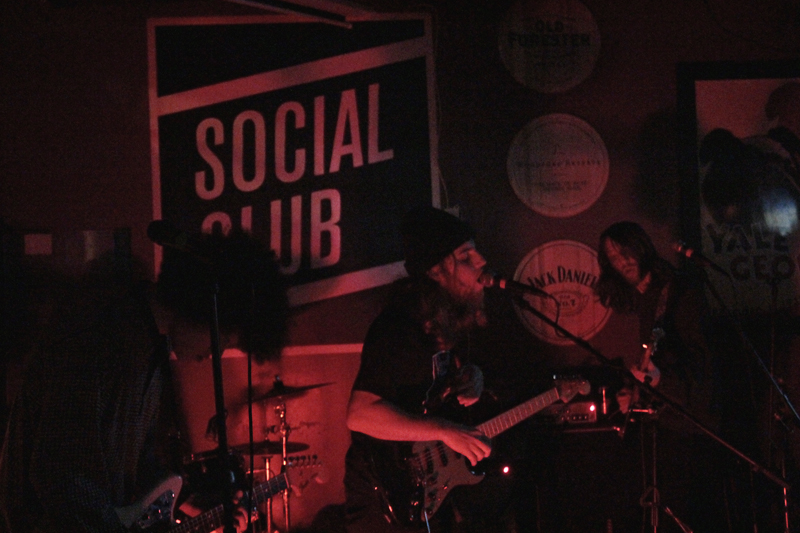 This innovative mellow rock fusion quartet was just what was needed after all excitement from earlier in the day, and the Congress Street Social club had the perfect chill environment. They swayed to their drifting grooves, as did the crowd. Like a psychedelic musical Rorschach test, they are hard to figure out but would fit in nicely at Bonnaroo. Both here and at Summer Shade festival in Atlanta, they were a treat to watch. 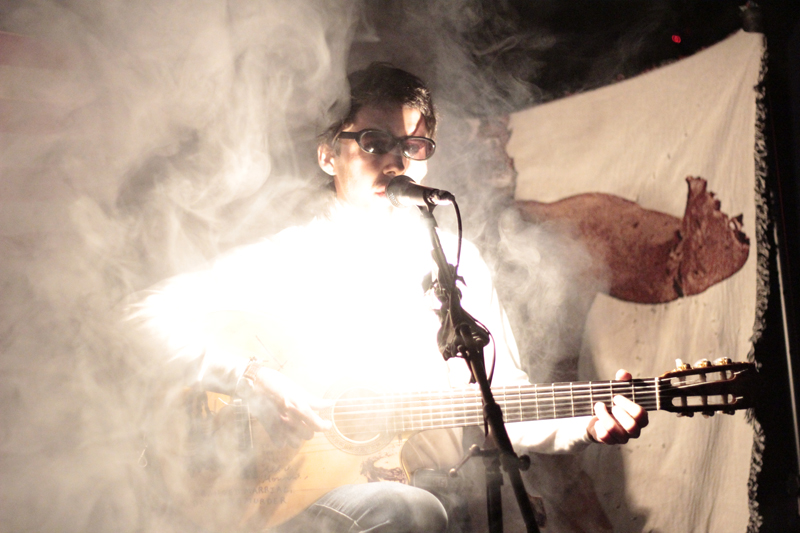 Juan Wauters held a performance art piece at a true coffeehouse, City Coffee. His Dylanesque, Iggy Pop-ish, abandoned coffee house beat jazz with a Beatles heart acoustic act truly captivated and brought so much to the cypher, it was inhuman. He’d make the audience sit still for one song, then gallop all over the next. Lyrics touched all corners of loneliness, solitude, and abandonment. When going to see him, dust off your dancing shoes and bring a fedora. 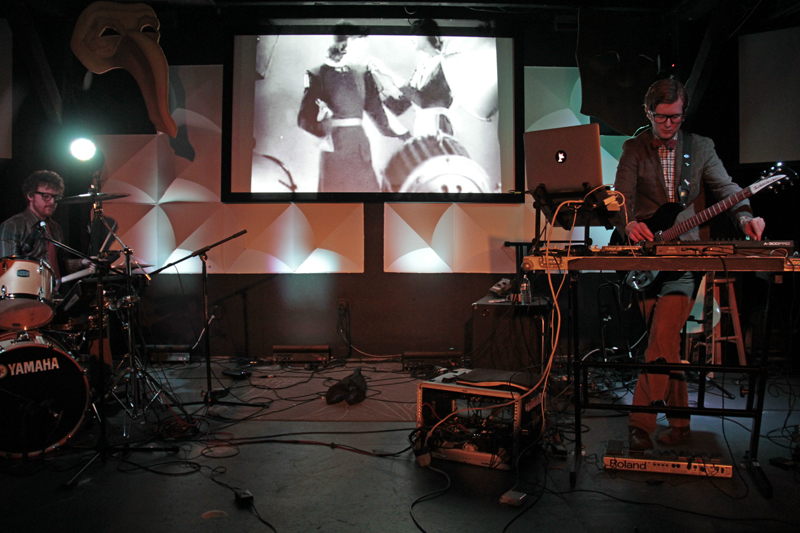 A perfect example of how much great music can come from two very talented people, their wild chop-funk electro sample fueled think pop utilized drums, keyboards, synthesizers and guitars.Like sand through a sieve, each song flowed seamlessly into each other, never giving the rather large crowd a chance to stop dancing. The band’s name truly fit their sound, creating memories of youth. 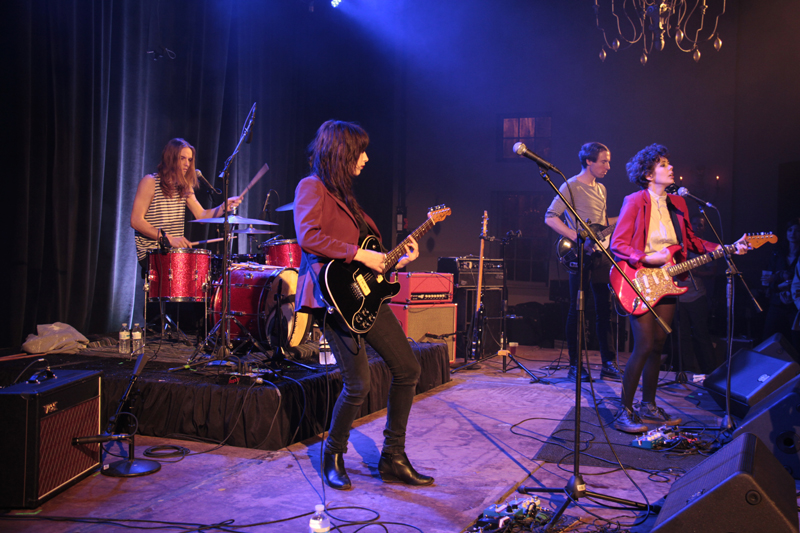 Two cute girls and two cool guys jamming on the groovy and greasy soulful songs make this band really stand out as they get wild on stage, full of raw energy but very intimate, having lots of fun but still keeping it tight. Their lost and found lyrical harmonies brought a really happy vibe to the gorgeous Knights of Columbus venue. 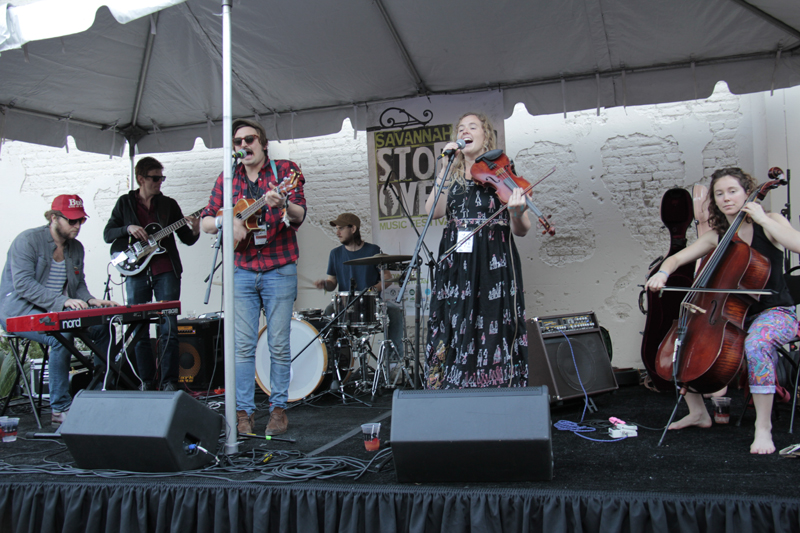 Wild Child was a true treat with their classic style folky love tunes, great harmonies, witty band banter, and a full, enthusiastic crowd at Moon River Beer Garden. This six-piece mixed it up too, tapping into southern kicking rock and new school blues. The female singer’s vocal poetry was aided by violin, and backed up with mellow drums and serene keys. Within the the great atmosphere of the beer garden, their set was a fantastic time. 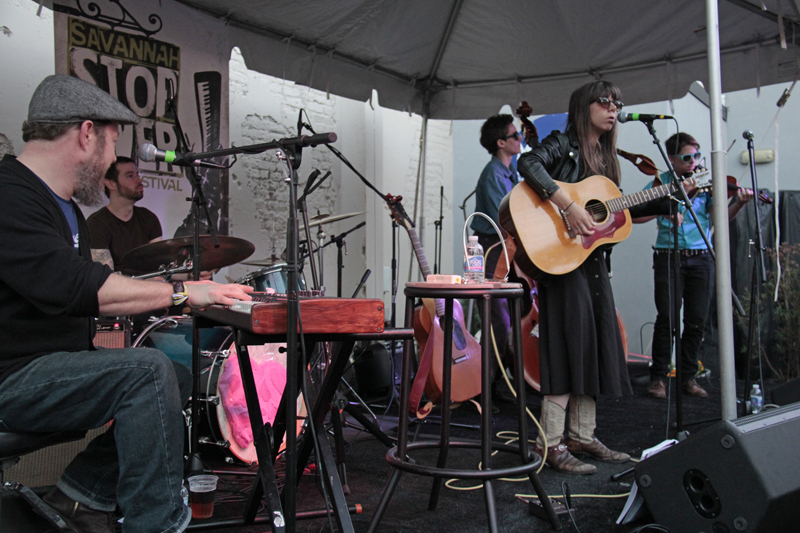 Hurray for the Riff Raff

True fragile heart, country bayou sweetness from Louisiana, these five welcoming artists melded together curious strings, brave vocals, and rhythmic guitar-based melodies. Capped off with dancing drums and kindred keys, they came out swinging, mixing a bucket of fun in with the deep lyrics, making you want to pass the gumbo during Cajun classics and wonderful originals. 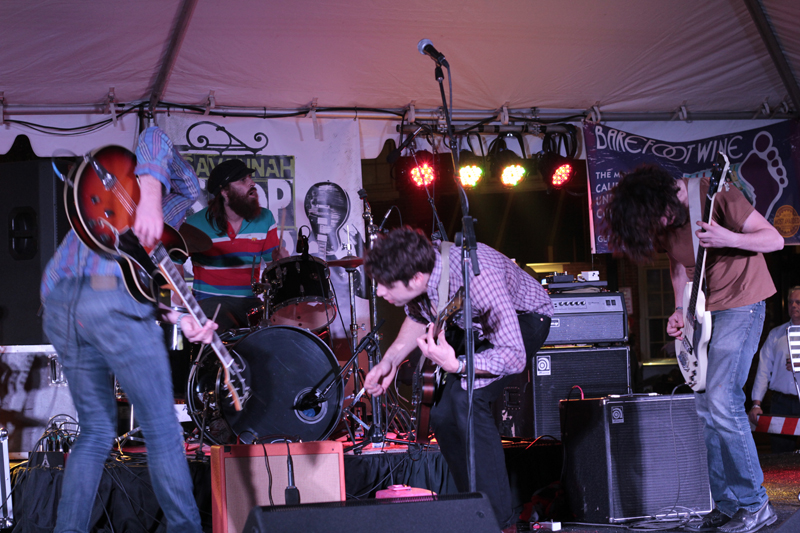 This male quartet from Nashville, Tennesee via way of Mississipi would tear up a prom. They shake it up and pop the cork! There was plenty of audience action with at least 25 people all dancing together, and the rest of the large crowd had head bobbing in full effect to this four- piece rhythm act fueled by true rock and roll spirit. Park your ‘76 mustang, roll down the windows, and enjoy the ride. 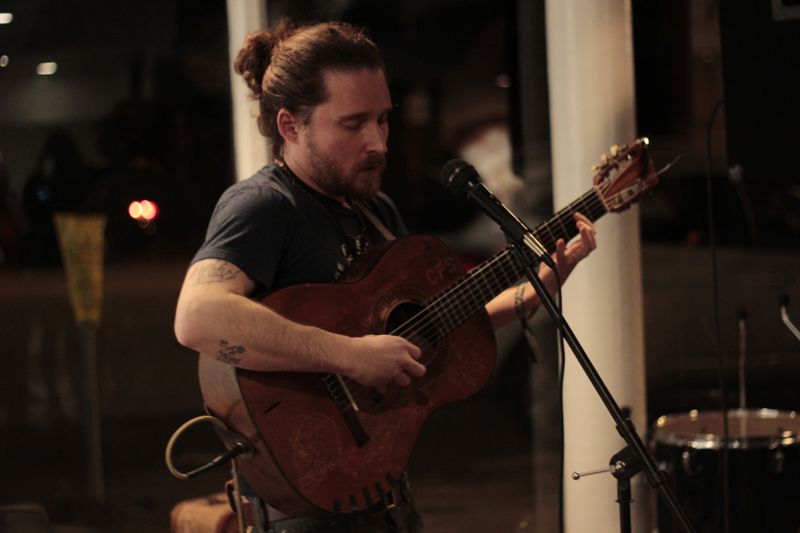 This guy is solo work at its best. His finger blistered melodic folk rock and old time vocal imagery brought many to their feet. He drew a huge, attentive crowd at the Artist’s lounge aka Ampersand bar. Giving life with his rise and fall riffs and rounds of vocal climaxes, he was very engaging with the fans during the set. Afterwards, many people lined up for CDs. 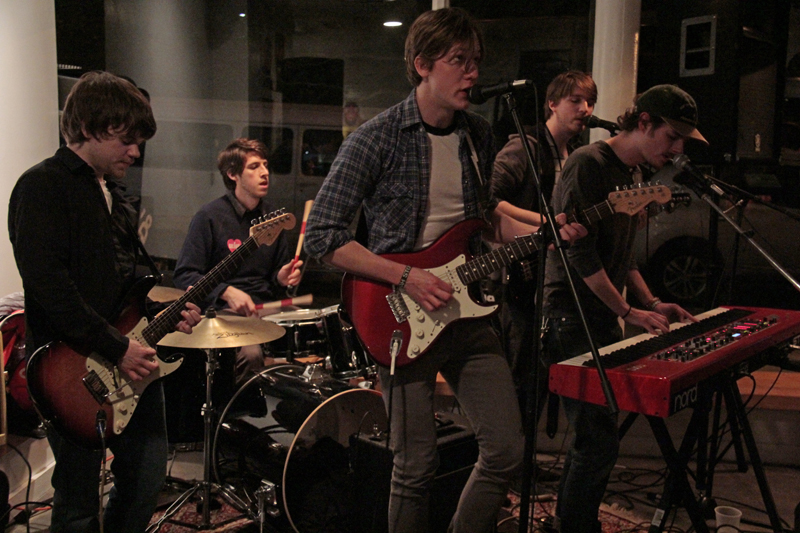 This upbeat set took place at one of the many great secret shows during the festival. Each member of this Macon, Georgia based quintet brought something delicious to the table. Deliberate rhythms delivered good time melodies that got the crowd hooting and feet stomping. 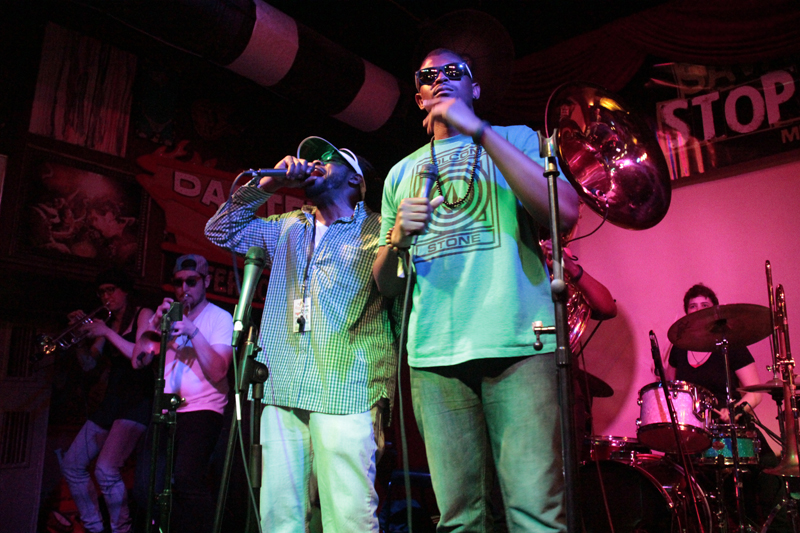 Wow. There are TEN members of this New York band! Sax, French horn, Sousaphone, guitar, trombones, drummers, and three singers! They were truly a spectacular sight with great stage presence from all members of this reggae/rap/rock/jazz combo you don’t hear often enough today. Originally formed by a few college buddies, this ensemble has blossomed into a show that should not be missed, although some had to on this night, as PitchBlak Brass Band played a sold out show at The Jinx to an immensely joyous crowd. 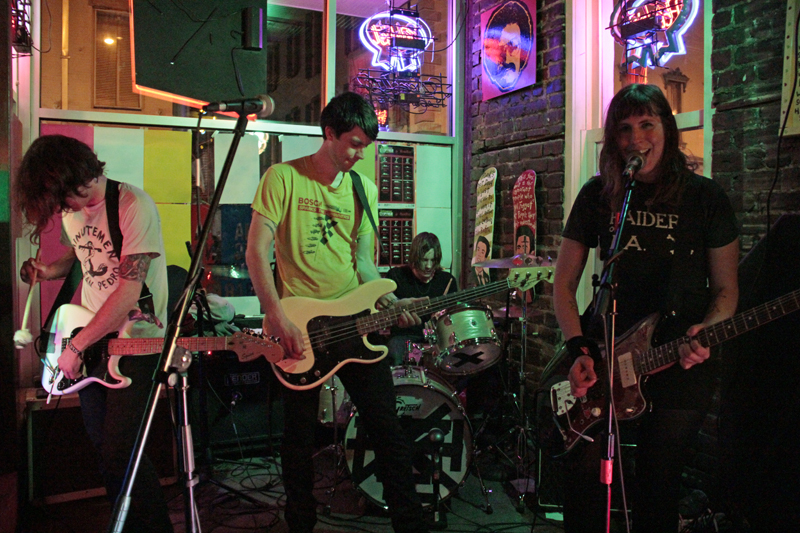 These four punks have been rocking the scene since 2008! With more than ten releases under their belts, it was no surprise when their set blew away the audience of the near sold-out show. The female singer-guitarist wailed, the drummer nearly passed out from the heat, the bassist-backup singer rocked and the lead guitarist was beating on his strings with a mallet at one point! All of Hang Fire went going nuts. It ruled. 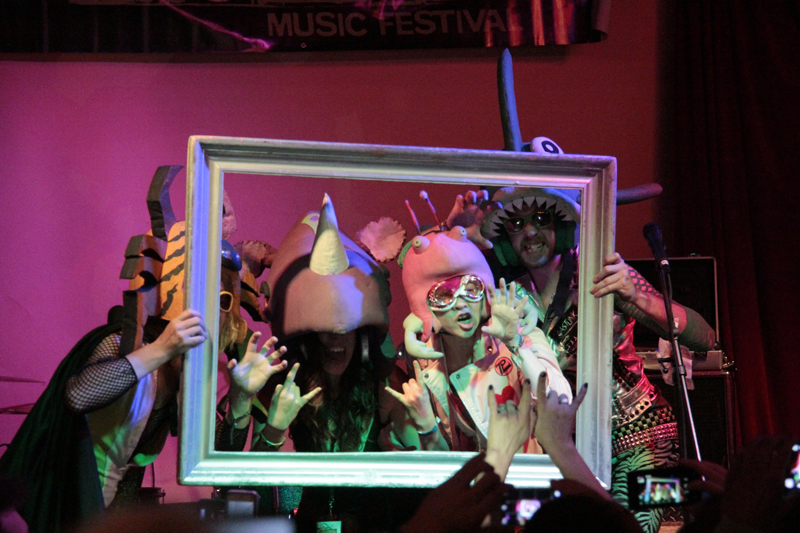 These costumed comics take stage antics to such a new level, it’s no surprise the crowd went berserk. They busted chords and crashed beats into poignant punk-textured hip hop while performing something akin to a Japanese game show with audience participation. Some might say there are bands just like them, but catch them live and judge for yourself. 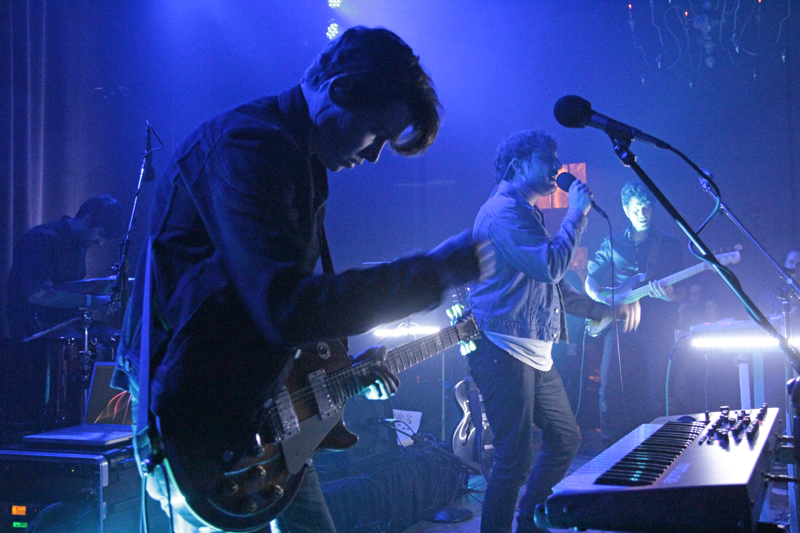 A headliner on the last day of the festival, the quartet called Small Black were arguably the very best band playing there. Smoke, lasers, dual vocals and superb electro pop style fueled the get up and dance energy of this incredible new wave influenced band. They fed off the power of the huge crowd that was getting crazier the later it got. After lighting up the Knights of Columbus venue, they’re definitely worth a repeat.