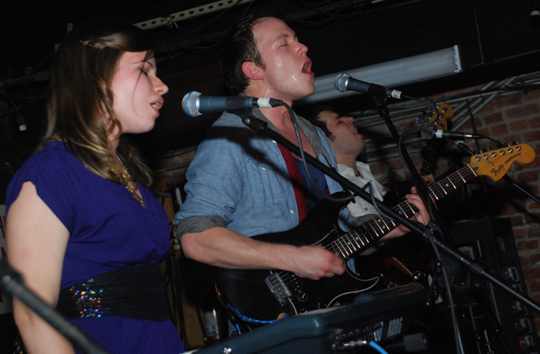 Click here for photos of Savoir Adore at CMJ 2012 in New York, NY

Click here for photos of Savoir Adore at Cameo in Brooklyn, NY on February 24th, 2012

Click here for photos of Savoir Adore at CMJ 2011

Click here for photos of Savoir Adore at CMJ 2010

Click here for photos of Savoir Adore at CMJ 2009

Click here for photos of Savoir Adore at 2009 Northside Festival in Brooklyn, NY

What do you say when a band delivers exactly as well as you expected them too?  Of course, it all depends on what you were expecting, going in – did the band live up or live down to your expectations?  For Brooklyn’s alt-country-meets-indietronica Savoir Adore, the expectations weren’t low, thanks to their great 2009 release, In the Wooded Forest (QRO review), and at New York’s Mercury Lounge on Thursday, January 14th, the band matched those substantial expectations.  If they didn’t completely surprise, they certainly did delight.

Savoir Adore kicked off the show like they kicked off Forest, with the one-two start of “The Scientific Findings of Dr. Rousseau” and “We Talk Like Machines”, the former a building opening anthem, the latter sweeter & smoother.  But then the band did hit up two new numbers, “Sparrows” and “Girl From Before”.  “Sparrows” was a bit higher & prettier (though with some 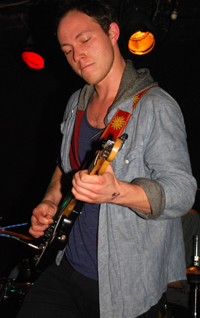 neat percussion), but the band may have been a little nervous, as it was the first time they’d ever played it in front of anyone.  “Girl From Before” was a short piece from singer/guitarist David Perlick-Molinari, relaxed country, without any alt (akin to fellow Brooklynites Jones Street Station – QRO spotlight on), though the band might have been better served spacing the two new songs out, like they originally had on their set list (QRO photo). 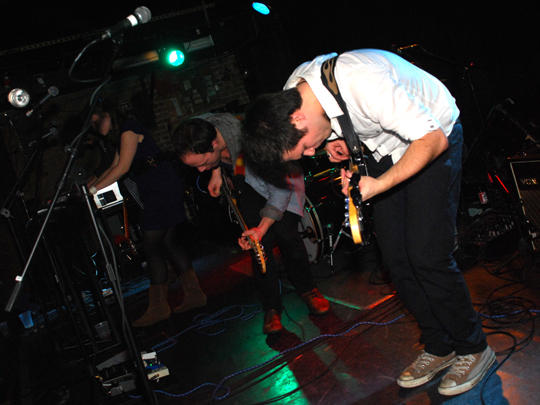 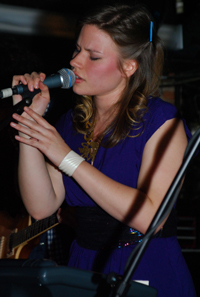 But from there, Savoir Adore stayed In the Wooded Forest.  “Early Bird” was just as excellent as on the record, enjoyable alt-beauty, but “Merp” certainly exceeded its album delivery, the almost calypso rhythms far more engaging live.  That was probably due to the band’s charming presence, whether the pretty singer/keyboardist Deidre Muro (though the poor lighting at Mercury – 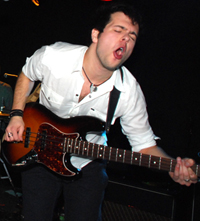 QRO venue review – didn’t exactly catch her), or bassist Sasha Brown, who has some of the most ‘into it’ facial expressions ever on a stage – he had his ‘Oh Face’ on pretty much the entire set.  The rest of the show played much like Forest: the growing “Sarah’s Secret”, catchy funk-rhythm to “Bodies”, alt-country progression of “The Garden”, and epic-sad “Transylvanian Candy Patrol” finished off the night.

After being surprised by the preceding two bands, both in a good way (Mon Khmer – QRO photos – who will be accompanying Savoir Adore on tour down to South-by-Southwest in March) and in a bad (Cruel Black Dove – QRO photos), Savoir Adore felt a little familiar, but also comfortable.  And when you knew they sound as nice as they do, you can’t be sorry that they were what you were expecting (and hoping). 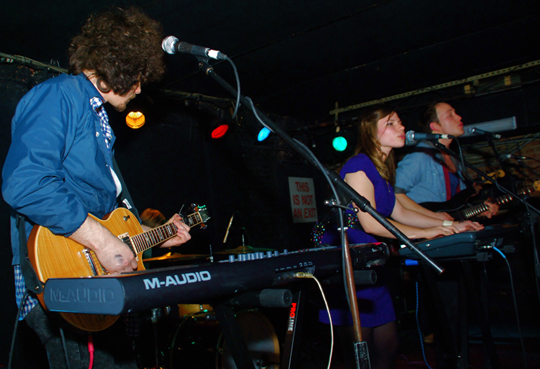