Scared to Get Happy is an impressive five-CD box set, packed with artists who hailed from up and down the breadth of the United Kingdom.... 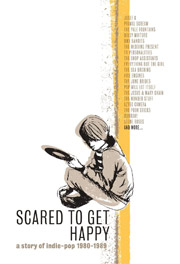 If by the end of the ‘70s the music press were proclaiming that ‘Punk is Dead’, could the ‘80s declare the demise of ‘Indie’ or independent music?  Had an entire universe of creativity and habitual striving for weirdness at times for the sake of art, been stripped away to become something quite unrecognisable; deformed and altogether ‘dirty’, unpleasant and Lord forbid……’mainstream’?

The ‘80s were a complete melting pot of all sorts of factions battling for identity, a decade where Thatcher proclaimed there was no such thing as ‘society’, that ‘community’ was dead, “It’s our duty to look after ourselves.”  ‘Indie’ went scratching ‘the eyes out’ of this and went about spawning itself from the various ‘cottage’ record labels, fanzines and free flexi discs.  This genre at the time offered something quite stripped down, raw, do it yourself, cheap, often optimistic and pure – unlike some of the ridiculous glossy icons caked in makeup who made up the ‘pop charts’ throughout the ‘80s.  Even David Bowie got it all completely wrong with his Let’s Dance-era that saw many of those he had inspired to turn in shame and embarrassment.

The early ‘80s saw the last embers of New Wave, grappling for top spot with Ska, Mods, New Romantics, Hip-Hop, Breakdance and those rockers who refused stubbornly to move on.  Mid ‘80s and the summer of love as ‘raves’ and ‘house parties’ kicked in, leaving those post-punk bands from the early ‘80s to either find themselves consigned to bargain bins or to become huge, grotesque and only capable of playing stadiums, artists like U2, The Cure (bit harsh), Simple Minds and R.E.M.  What was left of ‘indie’ it could be argued was finally put to the sword as Manchester spawned more than one monster in the shape of The Happy Mondays, James, Inspiral Carpets, The Stone Roses and the whole ‘Madchester’ scene which fused ‘alternative’ guitar-based music with dance music, ‘normalising’ it and ‘masculine’ it up for wider general public consumption.

Scared to Get Happy is an impressive five-CD box set, packed with artists who hailed from up and down the breadth of the United Kingdom.  There was no localised concentration of this underground rise of indie pop.  The box set is full of quirky bands, many of which remained largely passed by and largely ignored – except maybe by the legendary John Peel.  There are also artists on here who broke free from the bedsit, from the C86 movement to grapple with the trappings of the ‘mainstream’ and ‘selling out’, and one sure fire way was to leave an independent record label at the time in search of riches through a ‘major label’ and work on being the ultimate ‘sell out’.

There is six and a half hours of music here (the term music is used loosely with some tracks), but there are plenty of gems on here that would remain impossible to find, long deleted by bands who are never going to reform and would struggle to even sell out the smallest of venues.

There are the exceptions and this delightful box set also acts as a history lesson, as there are also many artists present on this compilation who are found at their inception, making their way around early music styles before finally (often years later) discovering the key and sounding completely different to where they first began.

So well done to Cherry Red Records for putting this box set together and preserving and documenting an account of a often unrecognised musical underground from the embers of the ‘80s.

The challenge was to work through and offer a brief run down of some of the 134 tracks to wet your appetite and they are as follows:

Starting with Liverpool’s The Wild Swans, a jolly galloping trot of an uplifting song and recently got back together with Les Pattinson, ex-bass player from Echo and the Bunnymen, joining them for several shows.

Art Objects “Showing Off To Impress The Girls” – one of several bands hailing from Bristol and were to then become the better known Blue Aeroplanes, with poet Gerard Langley’s words well sculpted around proficiently crafted catchy songs.

The Pale Fountains, “Something On My Mind”, is another Liverpudlian band who released a couple of fine albums in Pacific Street and From Across The Kitchen Table and produced by Ian Brodie of The Lightening Seeds.

Blue Orchids who formed from various disposed members of The Fall, who no doubt left after struggling to impress the moody Mark E Smith.  “Dumb Magician” has elements of The Fall, but without the frontman’s scowl!

Marine Girls are just too twee with Tracey Thorn destined for greater things (see later) and surprise, surprise –  ‘twee’ also are the band called The Dolly Mixxtures who were part of the backing singers for ex-Damned member Captain Sensible and his U.K. hits, “Wot” and “Happy Talk”.

Also very nice and delicate is Jane’s “It’s a Fine Day” which was remixed, repackaged and made into a major club dance track for Opus III in 1992.

Tracey Thorn with Everything But the Girl finds its way onto the compilation with an early stripped back jazz laden “Feeling Dizzy” that was to lead the way to the bands first album Eden in 1984.

The Daintees’ “Roll On Summertime” gets the hips moving and could be likened to something Vampire Weekend might attempt these days.

Pulp’s “Everybody’s Problem” goes to show that practice and determination to carry on, will lead to an improvement and the track in this compilation is testimony to this.  A mere ten-plus years later the band would finally establish the hits after hits they are now well known for.  Another band who were to go through musical changes until finding some chart success within the Madchester ‘baggy scene’ were Scotland’s Soup Dragons.

Aztec Camera’s “Oblivious” is timeless and as brilliant as the day it was released.  Another band with a strong initial showing is Lloyd Cole and the Commotions with “Are You Ready To Be Heartbroken”, later to appear on the debut album Rattlesnakes.

Something far more psychedelic and distorted and growling comes in the shape of the influential Jesus and the Mary Chain, The Bunnymen-esque Mighty Lemon Drops and the lovely Primitives who lead us “Thru the Flowers”.

The box set highlights how active and successful female artists were becoming with many picking up the guitar as well as a mic, such as the excellent Shop Assistants, Girls at Our Best! version of The Beatles ‘“Getting Nowhere Fast” cranking up the effects on the pedals, and the punk driven We’ve Got a Fuzzbox to name just a few.

Another fantastic band, The Woodentops with “Plenty”, offer some early acoustic strumming and hypnotic beats alongside Rolo’s gracing vocals which would soon lead to the highly acclaimed debut album Giant, an album that should grace everyone’s record collection without fail.

The compilation has nothing from Rough Trade legends The Smiths, but there are a couple of bands present on here that are of a similar ilk and supported Mozzer and the boys on tours, like the delightful trumpet drenched June Brides before moving into others like the Railway Children and early James with the jangly “Hymn From a Village”.  Another genius who should be mentioned alongside Morrissey is Davey Woodward and The Brilliant Corners with his Bristolian lyrical style of poking fun at relationships, class and politics all within a single track with simplicity.

More indie from the Bristolian music scene sees buzz pop from The Flatmates, who released several tracks on their own record label Subway (The Chesterfields), all this vs. Wales’ The Darling Buds hailing from Newport, and with the latter getting greater success and the beautiful lead singer Andrea Lewis fronting many copies of the NME.

There is such a variety on this box set, one minute being twee and pleasant with Tallulah Gosh, next jangly – Pop Will Eat Itself before they became god-like brilliant, next abstract and art house with Jamie Wednesday who morphed into becoming Carter and The Unstoppable Sex Machine some time later.  Pioneers of rave?  The Shamen, next psychedelic from the beautiful “Velocity Girl” by Primal Scream, then shoegaze – The House of Love, pop-tastic with That Petrol Emotion made up from several members of The Undertones before hitting you with something post punk and riotous like This Poison and Cud who both once supported The Wedding Present and were on the bands own label Reception.

This underground indie during the ‘80s was clearly influenced by the ‘60s, so there are countless easy comparisons with Velvet Underground, The Kinks and The Byrds and with songwriter and guitarist Lee Mavers and his band The LA’s, this is clearly evident.  Disc Five moves us finally into the lap of one of the most iconic bands of recent British history – The Stone Roses with the impressive reverbs from John Squire’s guitar that few can replicate, even if they tried.

This makes a great box set for the summer and will be on iPod repeat in the sunshine.  There are some tracks to skip, but there are some wonderful gems on here that are uplifting and fitting of the unusually warm and welcome British weather.  Scared To Get Happy is a perfect audio backdrop to ensure some wonderful memories remain in place.