After covering enough shows, some trends become apparent.  No one can rock an early evening show, or a seated show (let alone one where they’re serving dinner!).  When a label is pushing some of their small bands in New York City, they play industry favorite Mercury Lounge (QRO venue review).  And groups from the north of England or Scotland have hilarious between-song banter.

Thankfully, for Chop Shop/Atlantic Records’ Scars on 45 and Anya Marina at New York’s Joe’s Pub on Tuesday, February 7th, only the last one of those held true.

Joe’s Pub (QRO venue review) is a restaurant/bar off of Astor Place that also has a small stage.  It books mostly solo artists, and books them for solo shows – fitting in two separate, ticketed shows each night.  Yet Chop Shop (a part of major imprint Atlantic) was able to put two of their acts on for the early show, 7:00 PM to 9:00 PM.

Anya Marina kicked things off pretty much right at seven – with band in tow.  She stuck nearly entirely to next month’s new Felony Flats (QRO review), from its sly groove opener “Body Knows Best” to a rockin’ “Flinty” and closing with the winning indie-pop finish, “Notice Me”.  Marina was no shy songstress, but rocked like it was any ol’ gig – her guitarist even leaped a couple of times during songs, maybe the first time ever that 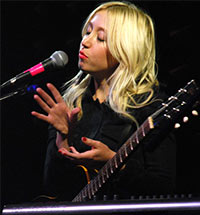 someone’s jumped around on stage at Joe’s Pub.  She also managed to fit in one song not on the set list (QRO photo with Anya Marina), despite being sorely limited for time.  Marina also fit in a description of going to a vegan, gluten-free bakery in Brooklyn that was like a scene out of a David Lynch movie, including Velvet Underground & The Zombies on the stereo, everyone whispering, and actress Evan Rachel Wood picking at a red velvet cupcake with a really beautiful man.  She also gave wise advice to parents of rock musicians: don’t have your friends go to their shows, as Marina’s dad’s best friend did for an awful show she just had in Cleveland, and then he sent Papa Marina a three-page e-mail concerned about her mental health…

The Portland native’s humor was a surprise, but you knew that Scars on 45 would be funny just from their brogue.  There’s just something about northern lads & lasses that they can not only poke at each other without making it burn, but they even let the audience feel like they’re part of the 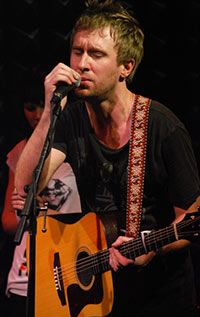 group’s joking around.  Keyboardist David Nowakowski said the high stool provided for him made him feel like Kermit the Frog.  Singer Aimee Driver told how difficult it was to be a girl riding around in a van with all these guys.  Near the end, singer/guitarist Danny Bernrose said about bassist Stuart Nichols, “I just said [to Nichols], ‘We’ve got time for two more,’ and he says, ‘We’ll do ‘em both’…” (Nichols later tried to talk into Bernrose’s mike, earning him a banning from the mike).  They got the crowd to sing happy birthday to drummer Chris Durling after informing that they’d said it was Chris’ birthday at each show for the past six days.  And this doesn’t even get into their description of Jacob Creek Wines, who use their song “Don’t Say” in an advertisement – “If you bring Jacob Creek Wine to a party here, you’ll be thrown out.  If you bring it to a party in England, you’ll get, ‘Ooh, nice…’  It’s vinegar, basically…” 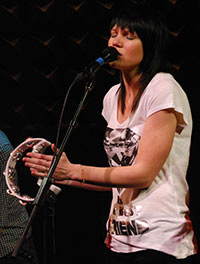 This isn’t to say that it was all laughs for the Bradford band.  Indeed, their alt-rock is decidedly on the emotional side on singles “Hearts On Fire” and “Give Me Something” (QRO review).  They’ll soon be on tour with The Fray (QRO album review), but Scars’ emotionalism manages not to fall into the trap of emo or overwrought – again, maybe it’s the accents.  There’s just something pitch-perfectly Anglo-tragic about an opening line like, “I carved your name / In an old oak tree / But the council chopped it down / ‘Cause it was filled with disease…”  It’s why they’re able to do a headlining tour with little more than those two singles out on record (the set list did have new songs – QRO photo with Driver) – and play a place in New York far nicer than Mercury Lounge.

The show wrapped up without time for encores, and by 9:30 PM Joe’s Pub was likely back to its old ways.  But there are still some things new under the sun.