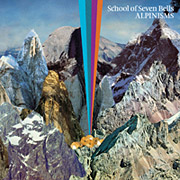 Sometimes a band’s sounds actually begs for visual imagery.  School Of Seven Bells delivers such a performance on their debut, Alpinisms.  The highly artistic array of synthetic noises combined with sedated, but inspired, vocals gives their audience a huge opportunity to mentally paint their own picture to accompany the music.

The band doesn’t come across particularly other-worldly like many "spacy" acts, as much as they seem like they’re coming from a deeply tucked corner of the Alps – such as the ones on the album’s cover.  Contributing to that feel is the icy quality of the sharp-edged glitches that dominate the album, and a blizzard-like effect with the swirling synths often playing behind them.  A somewhat ominous vibe courses throughout Alpinisms thanks to stark, and at times, clashing metallic sounds and the droning vocals of twins Alejandra and Claudia Deheza.

Click here for photos of School of Seven Bells at South Street Seaport in New York, NY on August 16th, 2009 in the QRO Concert Photo Gallery

The twins’ semi-conscious delivery strongly gives the album a dream-like atmosphere. Whether weaving like a double-helix or harmonizing slightly off from each other’s tone, there’s a ghostly aspect to their voices.  This all combines with subtle pianos, guitars, and ultra-modern percussion to blend elegantly into gorgeous background noise and pulls the listener even further away from reality.

On their debut, School of Seven Bells eerily opens the listener’s mind.  Using a slow wash of digital effects and hauntingly echoed vocals, the band creates a gripping sound that might be heard in a secret cult’s hideaway that’s buried deep in ice-covered mountains.