Seaport Music Festival seemed a thing of the past, but returned Thursday-Sunday, September 7th-10th.... 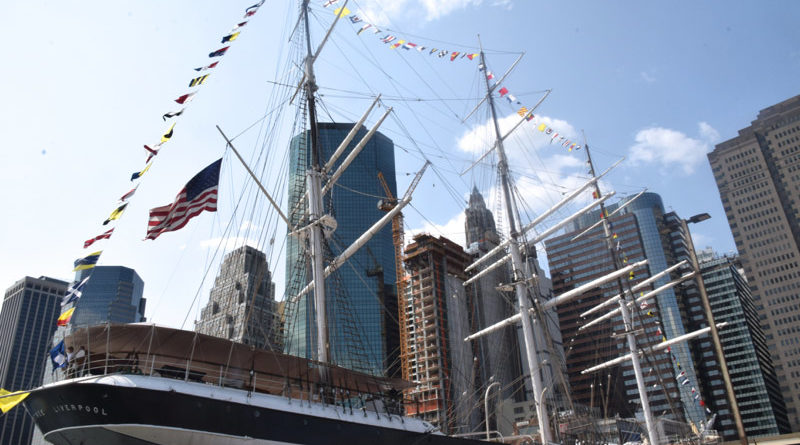 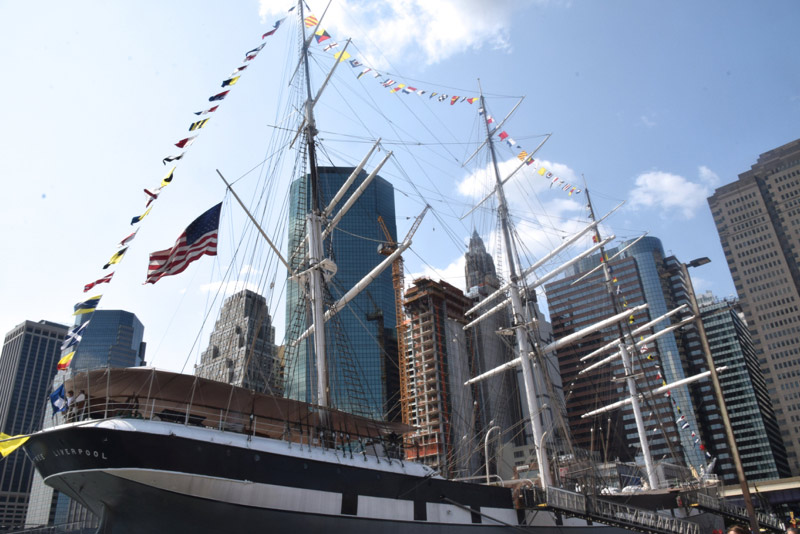 Fifteen years ago, downtown Manhattan’s South Street Seaport (QRO venue review) got a strong dose of contemporary music when the Seaport Music Festival started, bringing bands down to the downtown water for free, Fridays during the summer. Five years ago, Hurricane Sandy barreled through the tri-state area and wrecked the Seaport. Between that and redevelopment, the Seaport Music Festival seemed a thing of the past, but returned Thursday-Sunday, September 7th-10th.

Thursday saw comedy aboard The Wavertree, the steel-hulled sailing ship that is docked at the pier, while Friday was a dance performance by Dance Cartel.

On Saturday, the festival set up at the Garden Bar beer garden area off of Water Street. Despite it being the weekend after Labor Day, and a little cold, there was a healthy crowd at the spot, which includes not just an outdoor bar but also ‘Clinton Hall Self Pour,’ where you could pour yourself a beer (making sure to tip 45°, like you learned at college keg parties…) – though unfortunately the corn hole set was right in front of it, taking up space with the kind of people who play corn hole. 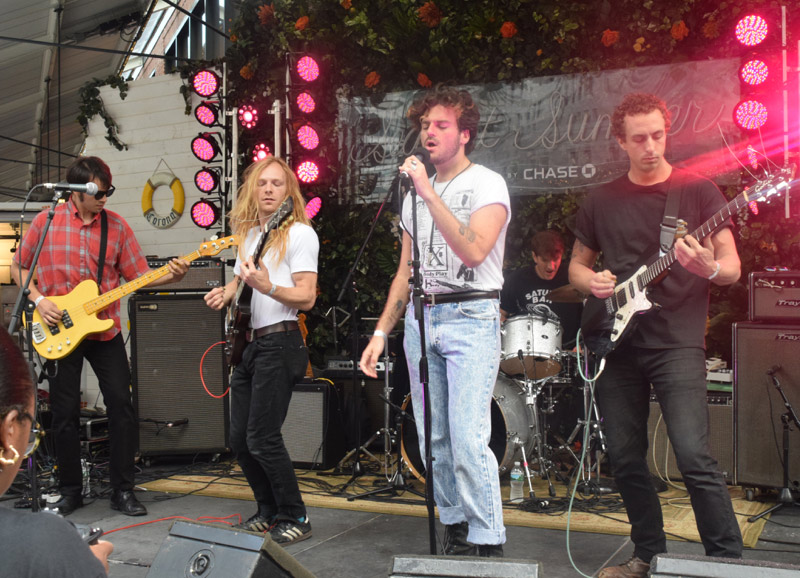 The actual stage was on the corner, right up close to the crowd. Opening was the grit-dirt Southern rock of Big Huge, a musical style that’s making a definite comeback. On the other side of the sonic ledger was Azar Swan, artsy goth synths. And keeping the festival from being too lily white was rapper Jean Grae, a funny and engaging personality (liked her describing her spirit animal as that dolphin that jumped onto a boat and beat up some people). 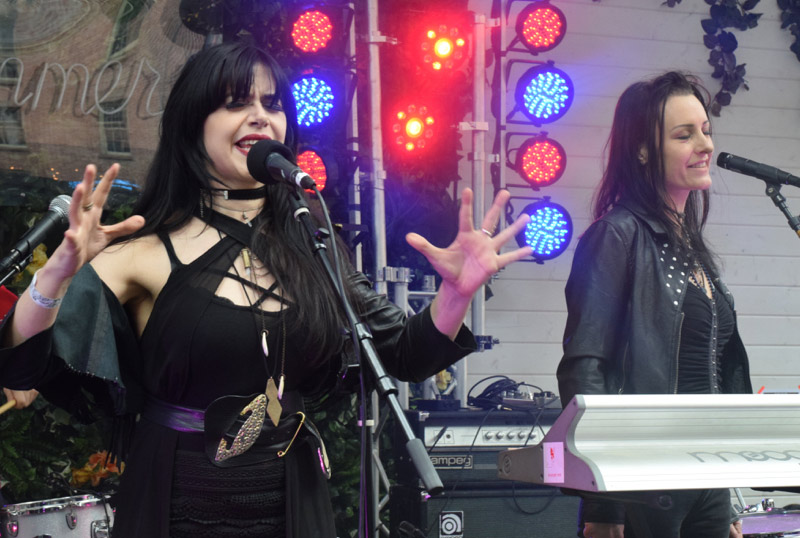 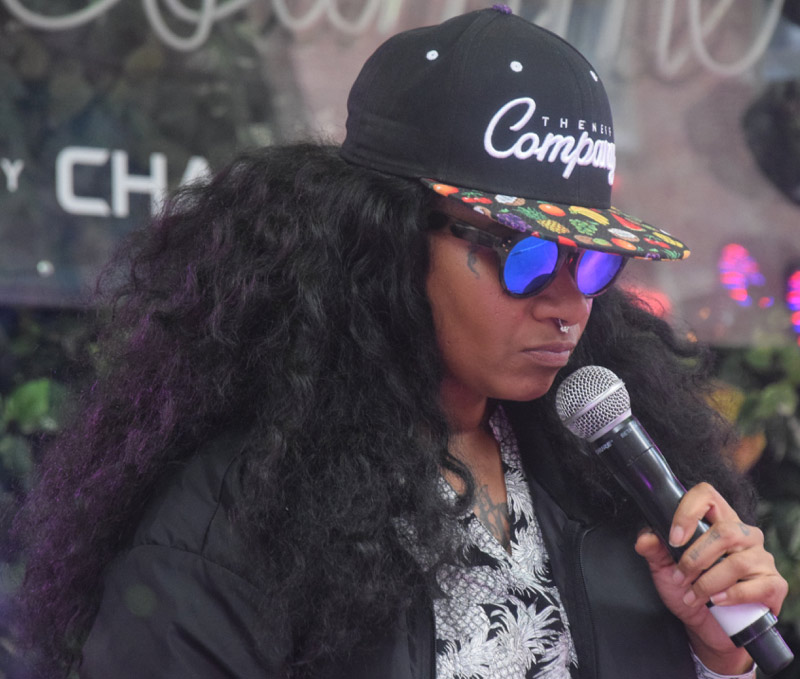 But the headliner was Ted Leo & The Pharmacists. Leo has long been an unsung hero of indie-rock, never quite getting the attention that he’s due, and had been away from music for a while. However, this performance was a kind of album release party for his first record in seven years, The Hanged Man. Like Grae (who joined him at one point, both that night & on The Hanged Man), Leo is funny and engaging, like his twitter feed (which is one of the funniest from a musician). 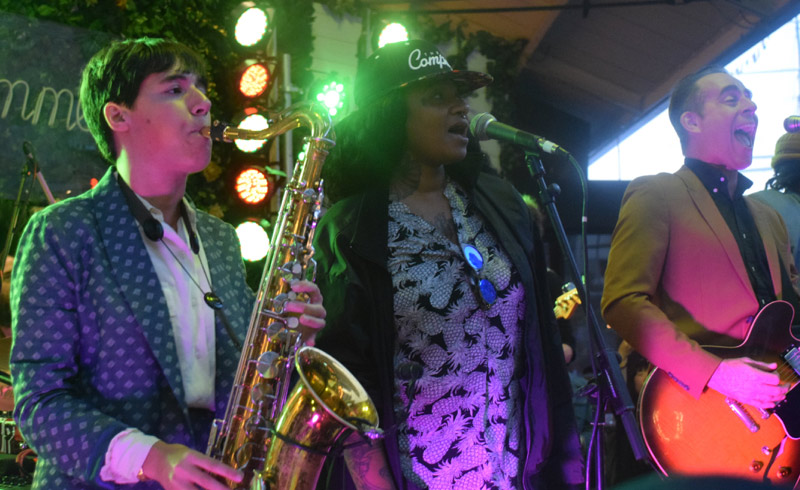 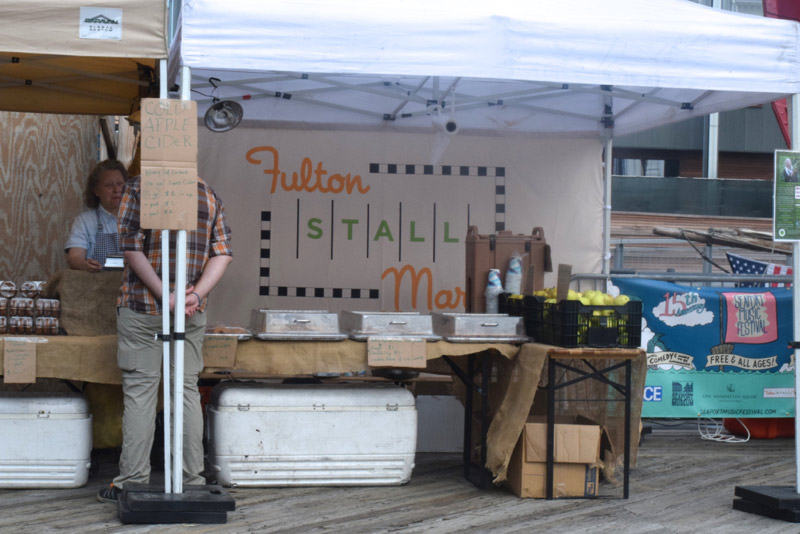 For the final day, the festival headed to the actual pier. Note that it was Pier 16, not Pier 17, as the old docking port of the festival is still being renovated – including a giant building on the old Pier 17 grounds. But Pier 16 is nicely situated between The Wavertree and the even older ship Ambrose, and there was even a farmer’s market. More importantly, one could still get a beer and walk around with it – open container is always a big draw. 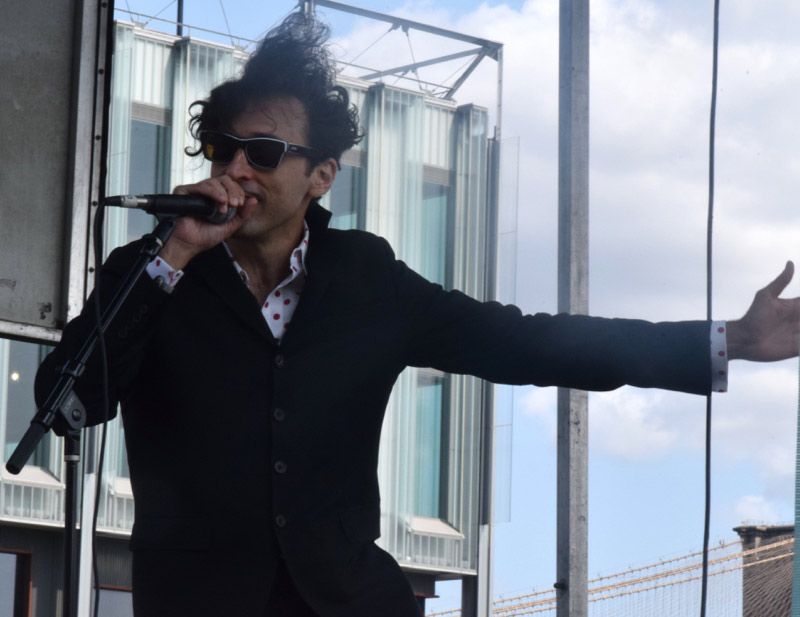 Hosting the event was DJ Jonathan Toubin, known for his ‘Soul Clap’ DJ sets. His tunes did veer towards the fifties obscure, the sort of thing April Ludgate of Parks & Recreation would like, but did include “Gimme Some Money”, classic early cut by Spinal Tap. 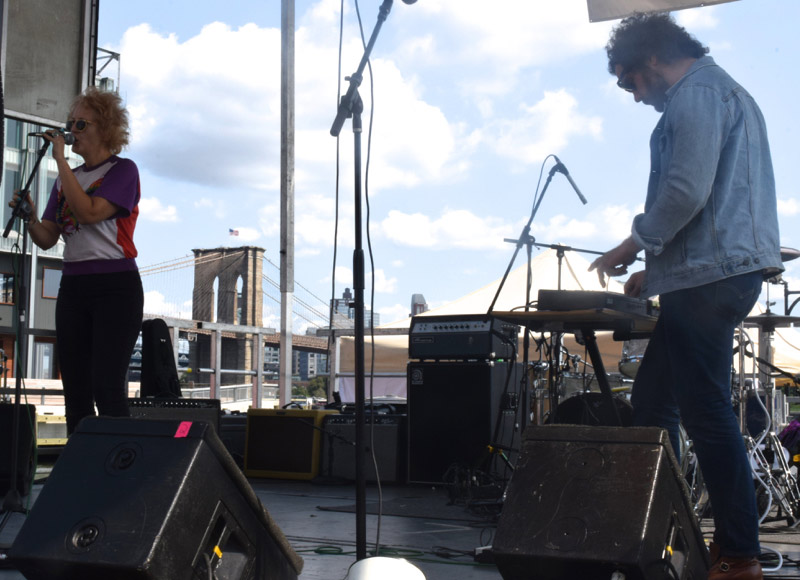 The line-up started in the early afternoon with Los Angeles’ Warm Drag, a noisy, dirty tech duo that includes Paul Quattrone, former drummer of !!! (whose singer Nic Offer – QRO interview – was in attendance). The family-friendly nature of the free festival was tested when the dirty garage Surfbort came on stage, with singer Dani Miller wearing a very see-through mesh top under her pink pantsuit. 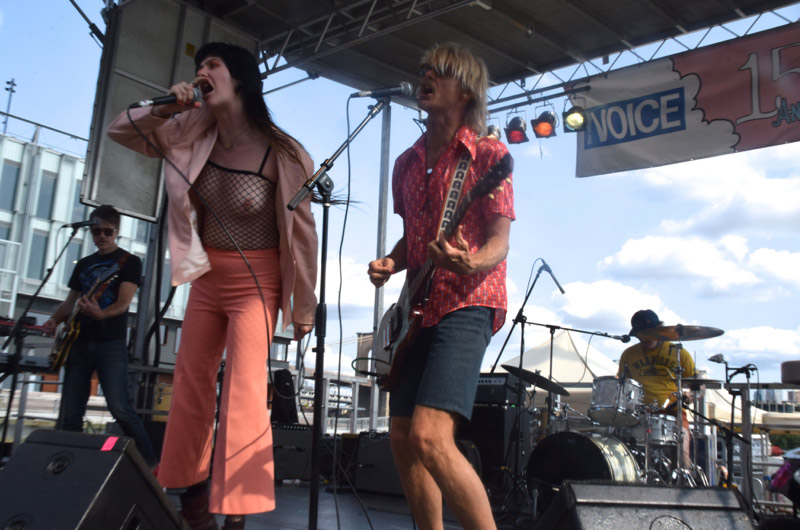 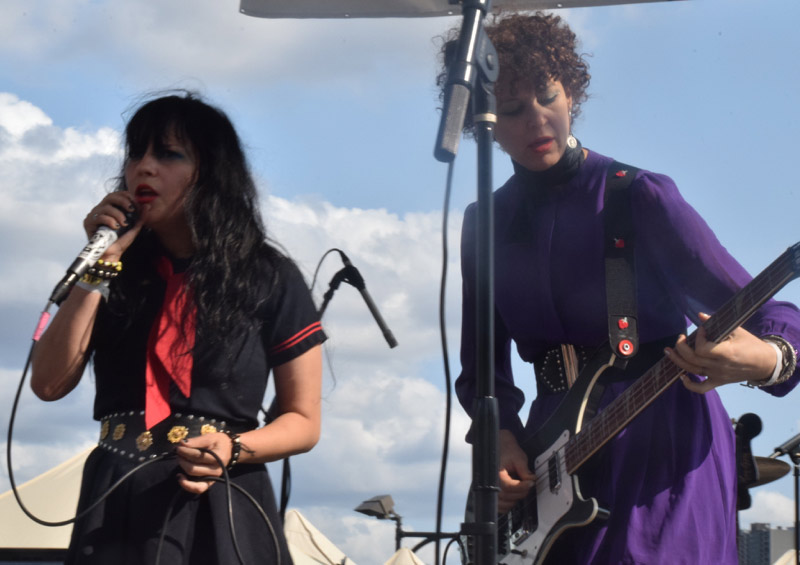 Neo-garage has always been a favorite of Seaport Music Festival head Stephen Dima, and it continued with the fifties-meets-riot grrrl Death Valley Girls, who get extra points for playing with Roky Erickson later that same day in Rhode Island. And it’s a rare festival that can have consistent female-fronted acts, which was eventually broken by the dudes of Nude Party. Their garage leaned more towards the rockabilly, including a song about rockers needing to get a job that could have been written fifty years ago, but was still applicable today. 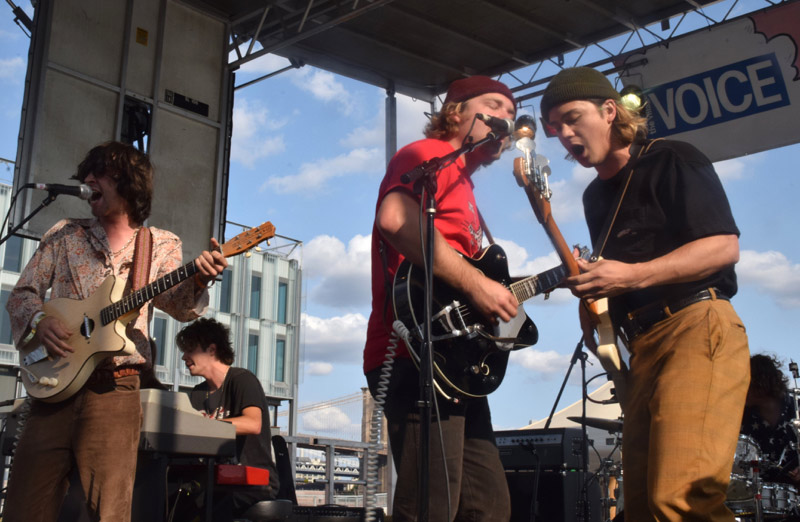 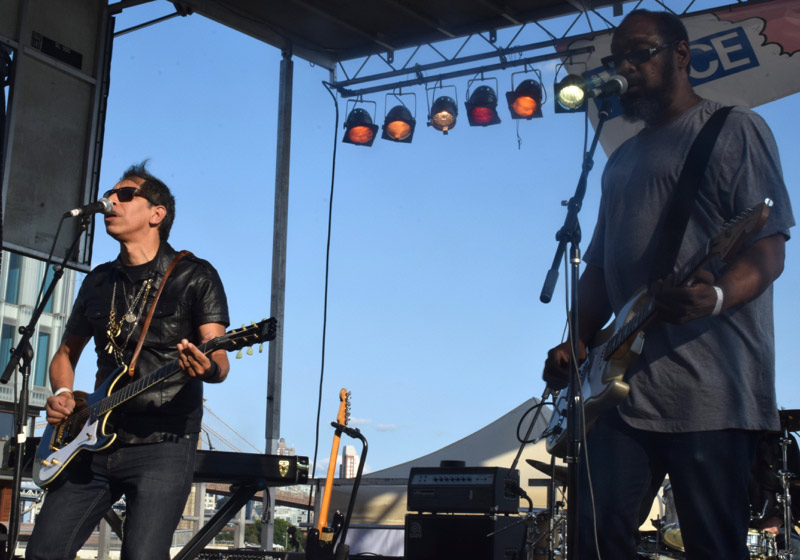 But the day wasn’t all about young kids. The Wolfmanhattan Project is a trio of alt-jazz greats, Bob Bert, Mick Collins, and Kid Congo, not too artsy for the wider crowd (though did take a while to set up – so artiste…). Drawing from New York City’s rich musical legacy was no wave pioneer James Chance & The Contortions (who had a good excuse for their delayed start – The Pioneer sail ship had to be able to hear in order to dock). Like Charles Bradley meets seventies jazz-punk, the saxophonist had a ton of energy for anyone, but particularly a guy his age. 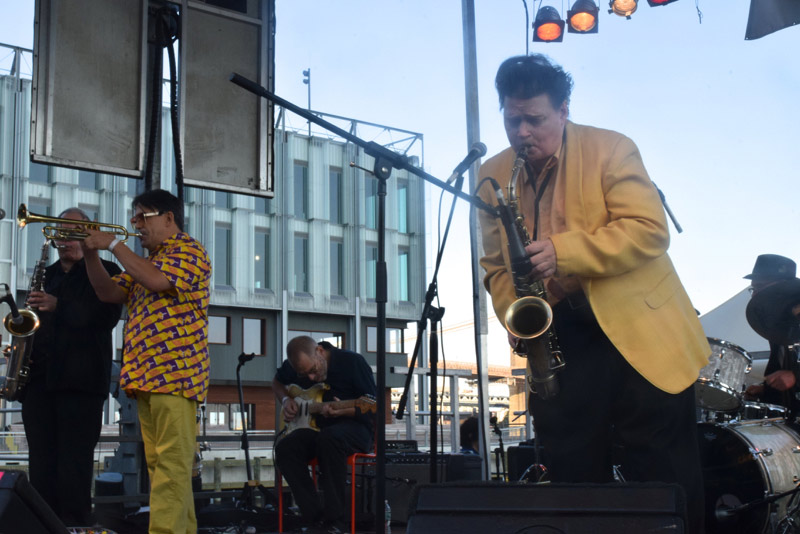 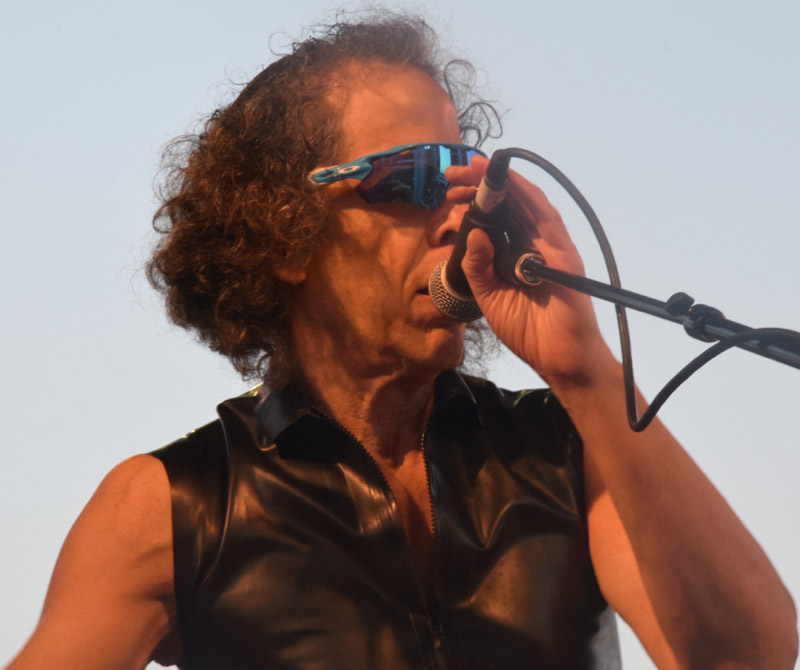 The crowd got thicker as the day went on, especially once security very belatedly started keeping people from standing in the wide fire lane after it was populated. And then there was Martin Rev. The surviving half of electronic pioneers Suicide, who had performed at South Street Seaport ten years ago, of course you could barely tell when he’d shifted from soundcheck to performance, just mashing keys over a strong backbeat. Yes, his equipment died twice, and yes, there were people with fingers in their ears. 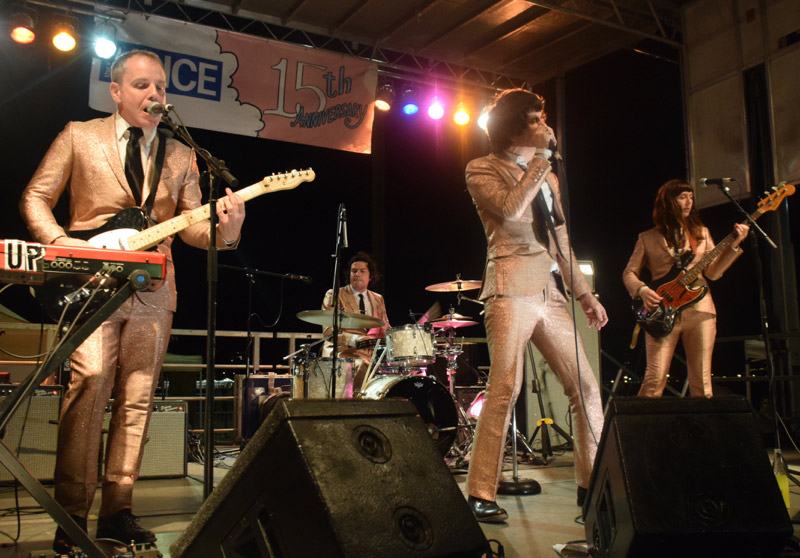 But it all was just a prequel for that Gospel Yeah Yeah Sound, The Make-Up! A nineties cross between the rhetorical punks Nation of Ulysses (many of whom formed The Make-Up) and a tent revival, The Make-Up is led by the irrepressible Ian Svenonius. The singer was in peak form & energy, literally walking atop the crowd many times like rock star Jesus. The band only recently reunited, and it was questionable going in what kind of draw they’d be, but everyone can love that Gospel Yeah Yeah Sound (even saw in attendance a member of the Yeah Yeah Yeahs, Nick Zinner). 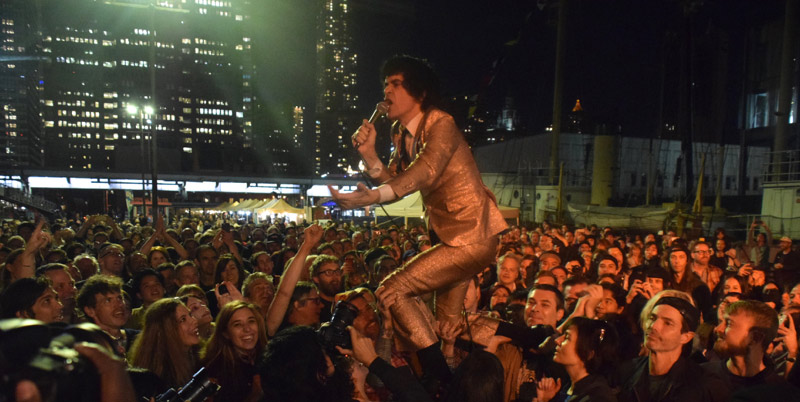 Songs like “I Want Some”, “The Untouchable Sound”, “Blue Is Beautiful” and more are instantly accessible to anyone. The rest of the band (including Pharmacist guitarist James Canty, playing back-to-back nights), were able to roll with their singer’s antics. Svenonius rocked whether on the crowd or on the stage, joking about how fans should become photographers for “instant VIP” (Seaport’s healthy photo pit had photographers snapping away throughout his set – your correspondent had the good manners & sense to eventually put down his camera and just enjoy the show), or how we’re “at war with the weather,” and have to sue for peace & stop complaining – it’s hurting the weather’s feelings… 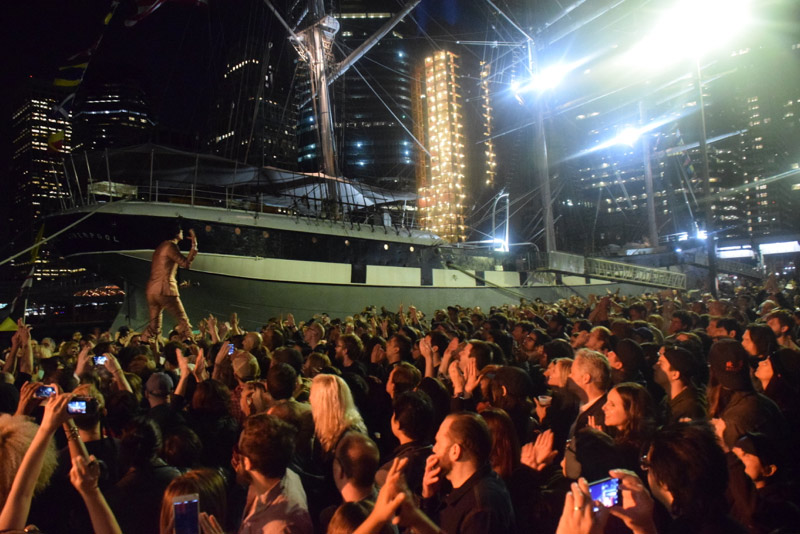 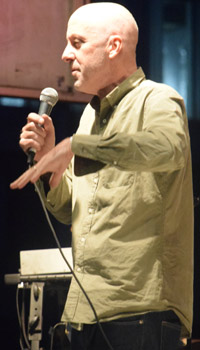 Stephen Dima closed the event by looking back on the prior years of the Seaport Music Festival, from the sponsors (who this year included everyone from Seaport Museum to The Village Voice to the new Flatliners remake) to the photographers – Seaport would let those shoot who the bigger uptown outdoor festivals like SummerStage wouldn’t (it’s where QRO first saw the likes of The National – QRO photos – and The xx – QRO photos). Indeed, he dedicated the festival to the late Chris La Putt, the gone-too-soon photo editor of BrooklynVegan, who’d been at like every Seaport show, ever.

Who knows what next summer will bring (or if there even will be a next summer, between monster hurricanes & the guy in the White House…), but here’s hoping it once again includes Seaport Music Festival.