The time is more than right for a new Sebadoh album.... 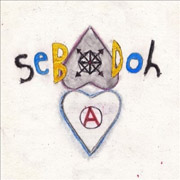 The time is more than right for a new Sebadoh album.  In the nineties, the group was known mostly for rotating members on all instruments (even when original member Eric Gaffney was replaced by Bob Fay in 1994), being ‘that band with Lou Barlow of Dinosaur Jr., where he wrote the kiss-off “The Freed Pig” about J Mascis after Mascis fired him from Dinosaur,’ and for a rough, lo-fi sound more akin to grunge, but on songs with emotional loss that were often quiet.  They largely didn’t fit in anywhere on that decade’s alt-map, and there was little surprise when the various songwriters split up for other projects after 1999’s The Sebadoh.

Well, the band’s legacy has only grown in this century/millennium, as lo-fi is so hip(ster) that it’s almost establishment by now, the members have succeeded in other projects (from Jason Loewenstein in Fiery Furnaces – QRO photos – to Barlow in the reunited Dinosaur Jr. – QRO live review), and reunions of nineties alt-acts are all the rage.  Sebadoh did the ‘reissue/deluxe edition’ tour (QRO review) for records like 1993’s Bubble & Scrape (QRO deluxe edition review), but only now are they out with an actual new album, Defend Yourself, and it’s as strong as when Sebadoh wasn’t appreciated enough.

Click here for live review of Sebadoh – in its ‘classic’ Barlow/Gaffney/Loewenstein form – at Webster Hall in New York, NY on March 31, 2007

One interesting new aspect to Defend is that it’s not as clear who wrote/sung what, unlike their nineties records.  Presumably Barlow and Loewenstein took center stage on this record, as filling the Gaffney/Fay/Russell Pollard (Sebadoh’s final drummer, also of Barlow’s later Folk Implosion) role is Bob D’Amico, also of Fiery Furnaces, so the rotating might not be as extreme.  It’s pretty clearly Barlow on vocals on first numbers “I Will” and “Love You Here”, but from there the record feels more like a group effort, almost like a band actually aiming to sound like Sebadoh – and succeeding.

Not that there aren’t new elements added to Sebadoh’s lo-fi loss.  There’s a near-Guided By Voices big & dark lo-fi to songs such as the near title-track “Defend yr Self”, and then backwoods freak-folk on “Inquiries”.  There’s even country-grit to “Can’t Depend”, but all the songs still sound like Sebadoh – and that’s a good thing, from the not too lo-fi “I Will” & “Love You Here” at the start to softer, acoustic sadness in “Let It Out” near the end.  It all culminates, if anything Sebadoh can ‘culminate’, in the following last two numbers, “Listen”, which is just pitch-perfect lo-fi Sebadoh loss, and “Separate”, which brings in both the backwoods of “Inquiries” & “State of Mine” and the pressure of “Final Days”.

Most Gen X-ers & Gen Y-ers could be forgiven for not catching on to Sebadoh, first time ‘round, as they were a little too far from any box.  However, by now their legacy has created its own space, making it high time the band returned.