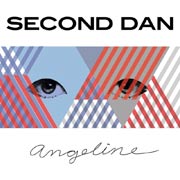 When Second Dan introduced themselves to America in 2008 with Bringing Down Goliath (QRO review), the act still hewed to the more anthemistic expanse of frontman Dan Rosen’s native Australia, with some mainstream rock underneath that didn’t serve to distinguish.  With Angeline, the Lower East Side act brings that more mainstream element, especially in uplifting emotions, for a record that varies from pitch-perfect catch to cringe-inducing emo.

The anthemistic alt-rock guitars of opener "Today" seem to indicate the same Second Dan as before, but it is with the more straightforwardly up lyrics that the change can first be seen.  However, it’s a lot more obvious after that, from the quite good – rockin’ press of "Let It Go" & catchy speed of "Pretty" – to the nice but simple – lovey-dovey title track & barroom rock of "Wake Up" – to the cheesy emo-anthem "More Than the End", with lines like "I’d like to make your breakfast / On a Sunday afternoon / We could read the New Yorker / And laugh at the cartoons", bringing to mind The Script’s theme song to Intervention or Deep Blue Something’s "Breakfast at Tiffany’s".  But even Wilco’s Sky Blue Sky (QRO review) had "Shake It Off"…

Second Dan was probably never ‘indie’ enough for the NYC hipster world (but really, who is?…).  But that’s in no way a knock – just look at Tokyo Police Club (QRO spotlight on) and their enjoyable latest, Champ (QRO review).  With Angeline, Second Dan have fully shifted into a rock ‘n’ roll that is more mainstream, but still with strengths.

The Boat with Pattern Is Movement Ticket Giveaway