Friday was a big Day One at Atlanta's Shaky Knees Fest.... 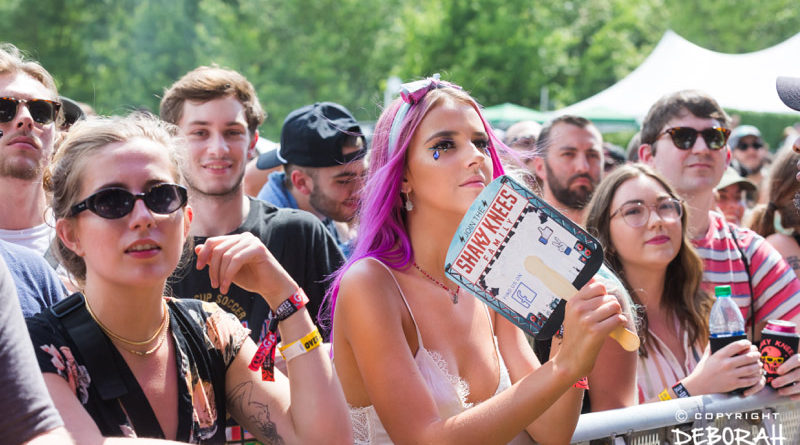 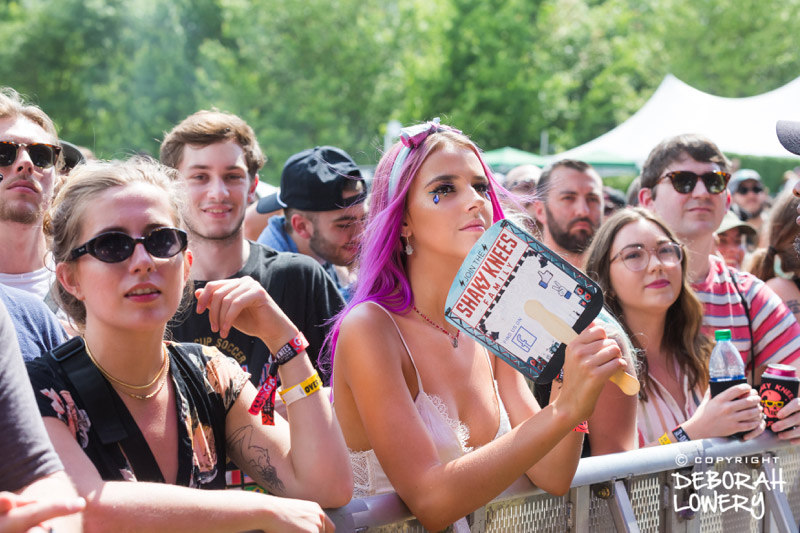 Yes, it was hot & sunny to start Shaky Knees, with only one threat of rain on the first day (always a risk at any outdoor festival). Early on, as folks were getting the lay of the land with its four stages – Central Park is rather hilly, with lots of hiking up roots, but also a fair amount of shade – was Curtis Harding on the main Peachtree Stage. He’s a young bluesman, which is very hot these days (see Saturday’s Gary Clark Jr.). 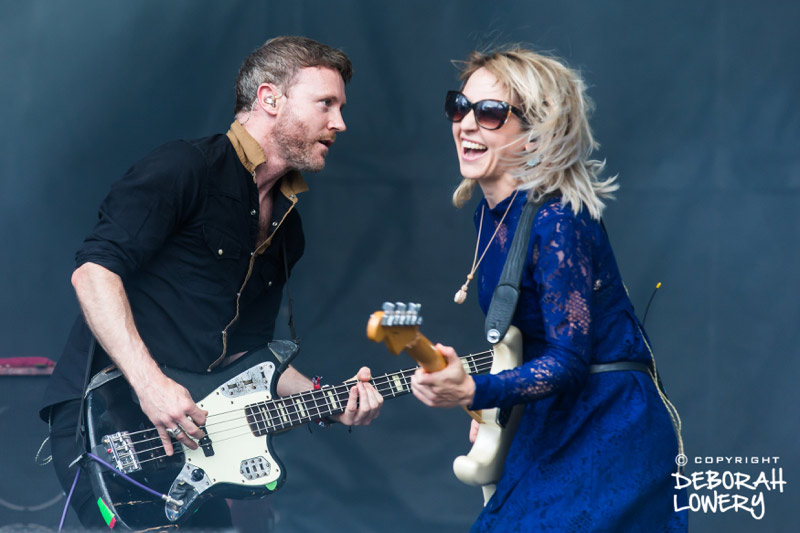 Not used to the heat was North Wales’ The Joy Formidable at the Piedmont Stage, though energetic frontwoman Ritzy Bryan joked that she’s since moved to Utah (of all places), and just isn’t used to sweating. A fan in the crowd cheered for nearby Arizona, with which Bryan mentioned the state’s weird liquor stores (Mormon country is not where you go to get drunk…). Mixing newer songs from last year’s AARTH (QRO review) with their older classics, the more recent material had a harder edge. Yet the band was still their usual exuberant self, bemoaning that they couldn’t stick around for the rest of the festival, but they ‘had’ to go do their tour… 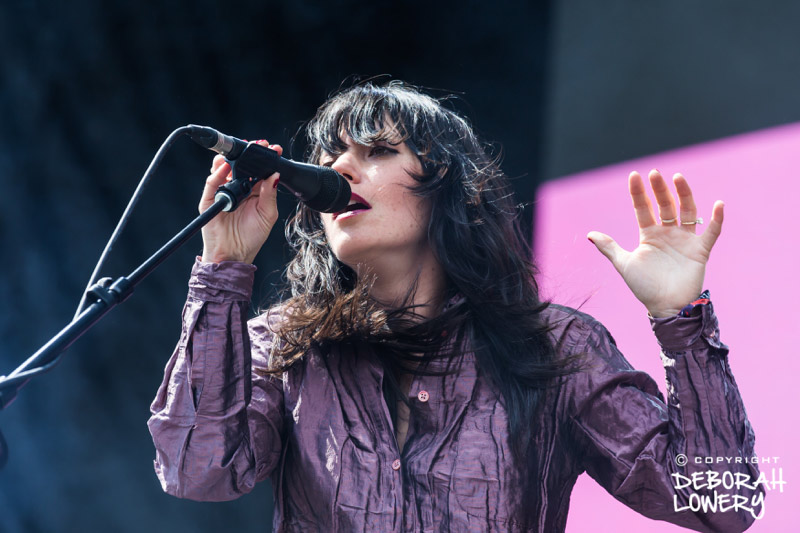 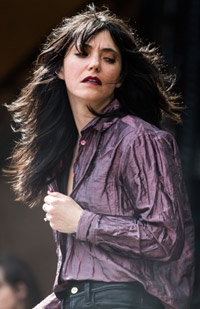 Things have only gotten bigger & bigger for Sharon Van Etten, who’s gone from Brooklyn ‘it girl’ to big name (is even moving to Los Angeles, after starring in the second season of Netflix’s The OA). Her Peachtree Stage set started with a slow burn, as Van Etten eschewed her guitar to just sing, as well as frame herself for the cameras (she’s totally gone L.A…). Her songs from this year’s Remind Me Tomorrow (QRO review) early on had her as more of a dark chanteuse, but she did eventually pick up her guitar for older, more country-gal pieces. And of course she killed it with Remind standout single “Seventeen”. 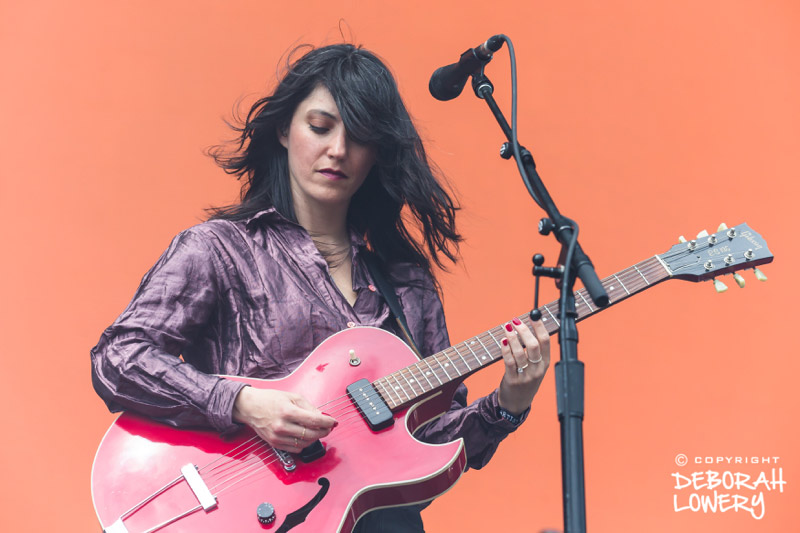 A killer one-two punch on Day One was Van Etten into Liz Phair at the nearby (if uphill) Piedmont Stage. While music festivals have been making definite strides in increasing female representation, there’s still a ways to go, so it was great to go from Van Etten into one of her icons (as @sharonvanhalen noted on Instagram). Phair was the ‘it girl’ back in the nineties, yet at Shaky Knees she had a strong fan base that was male as well as female, young as well as old – though of course the classics like opener “Supernova” or “Stratford-On-Guy” were the best. 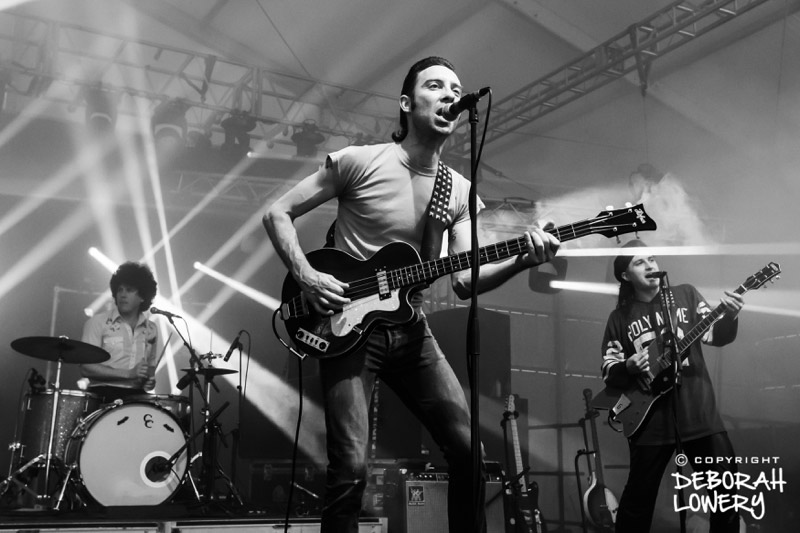 Meanwhile, on the other side of Shaky Knees, under the canopy of the Ponce de Leon Stage, were locals The Black Lips. That roof – and its very welcome shade – made for a more packed-in crowd, and thus a more packed-in energy, essential for the wild band. Okay, maybe the line-up’s changed and they don’t release live chickens on stage anymore (QRO photos doing that at a festival), but they’re still a wild garage-rock band, and the shade also let them wear neon-lit clothing. 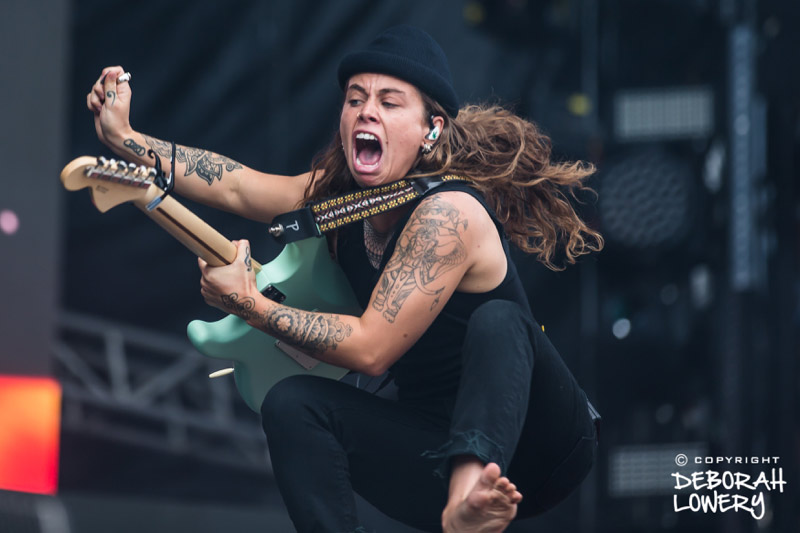 Across the street was the smaller Criminal Records Stage, which hosted veteran punks Face To Face. So veteran that all save the singer were seated for their workingman’s punk. On the much bigger Peachtree Stage was Tash Sultana, who was anything but seated, as she played all of her instruments herself. 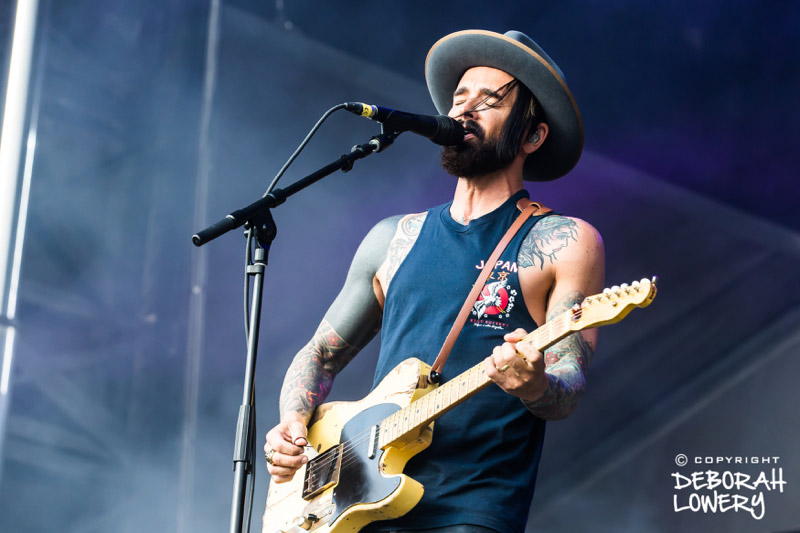 When emo broke out a few decades ago (was it really that long ago?) one of the originals was Chris Carrabba and his Dashboard Confessional. Yes, maybe he laid it on a bit thick at the Piedmont Stage, including, of course, some solo acoustic pieces, but that is his signature. Yet he also covered The Cure’s “Just Like Heaven” – an amazing song, but Dinosaur Jr. have had the definitive cover for ages – and, for some reason, “Love Yourself” by Justin Bieber… 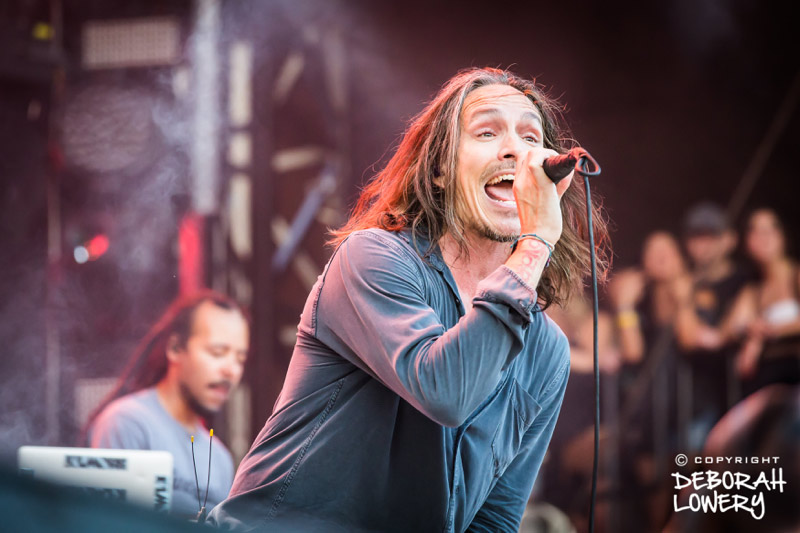 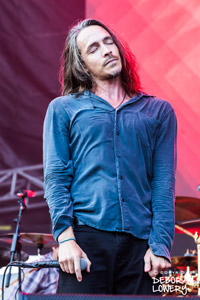 Even if you’re not into Incubus, you gotta respect Incubus. And a lot of people at the Peachtree Stage were into Incubus. They’ve got impressive musicality and complexity for such a hard-hitting act, more than just ‘hard-hitting’. Singer Brandon Boyd is still ripped (though didn’t take his shirt off this time), reminiscent of the late Chris Cornell. But long ago breakthrough single “Pardon Me” is still their biggest & best, including the best record-scratching DJ work in a rock song. 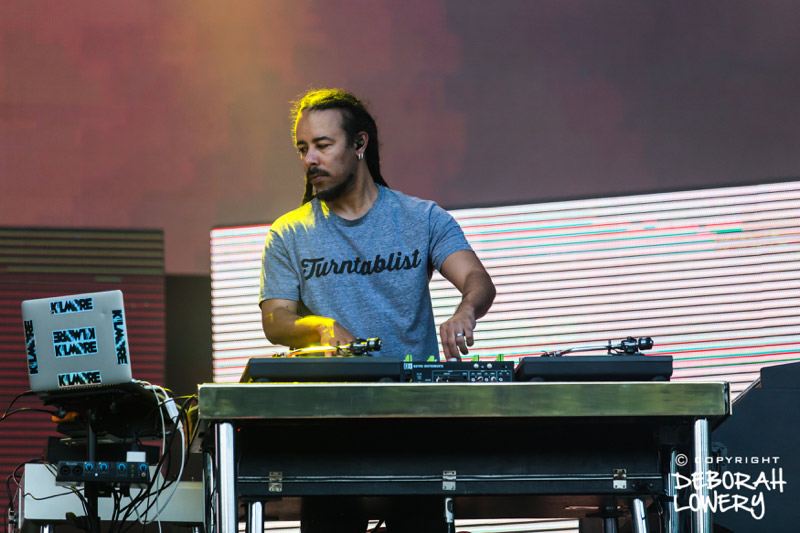 “We’re Tears For Fears. We’ll be your adult entertainment. Just think of us as your token old people.” While they might be an eighties band, Tears For Fears are one of the great eighties bands, and have been on a definite revival/upswing in recent years, from everyone embracing the kind of synths that they were doing way back when, to Weezer covering their iconic “Everybody Wants To Rule the World” on the Teal Album (QRO review – Tears’ Roland Orzabal joked about it being weird to be in Atlanta without Weezer). 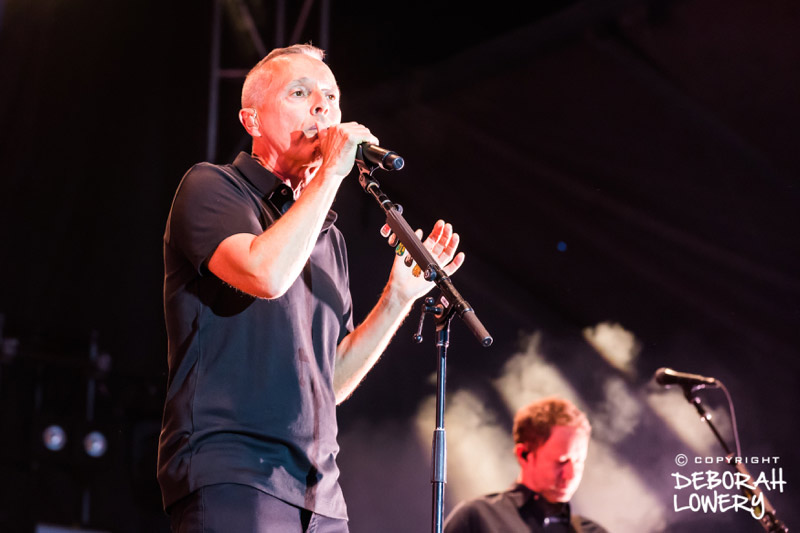 Orzabal and Curtis Smith made the bold choice of starting their set with that best-known song of theirs, which brought people rushing to see them, yet threatened to be, ‘I’ve seen the song I came to see.’ But Tears For Fears are more than just “Everybody”, with other eighties singles such as “Sowing the Seeds of Love”, “Break It Down Again”, and “Memories Fade” (a staple of moving moments on television & film). They even covered Radiohead’s “Creep”, the breakthrough for that band that they & their hardcore fans now say is too commercial, but everybody loved at Shaky Knees. To close out their set, the must-see of Shaky ’19, Tears For Fears returned to “Everybody” record Songs From the Big Chair in its fellow greats “Head Over Heels” and “Shout”, proving that they were a band that deserved to be great, and that you really need to see now. 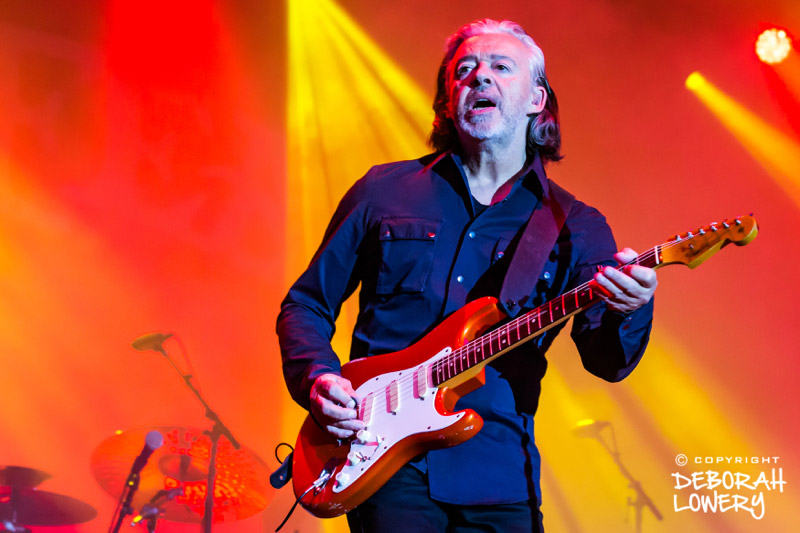 Headlining the first night of Shaky Knees at the Peachtree Stage was a wonderful pick to headline any festival, the one-and-only Beck [not so wonderful? Him not allowing most photographers…]. He’s been a big artist for decades, yet has done so many different things, from mega-breakthrough single “Loser” to recent Grammy-winning album Colors (QRO review). He’s done intimate, sad folk like “Lost Cause” and giant dance party like “Sexx Laws”.

And he did them all at Shaky Knees. Another artist not afraid to lead with his classics, Beck opened with “Devils Haircut” and “Loser”, to reward all those who had gotten there early to get as close to the front as possible. And if an old song like “The New Pollution” kind of made a newer one like the following “Wow” pale in comparison, so be it. There was an acoustic sexy “Debra” (that included snippets of Kool Keith’s “Lovely Lady” and Prince’s “Raspberry Beret”) and “Lost Cause”, and wild band on “Sexx Laws”. Beck was a force up there, even getting down on his “shaky knees” – and one shouldn’t overlook that impressive backing band, who kept up with everywhere he went.