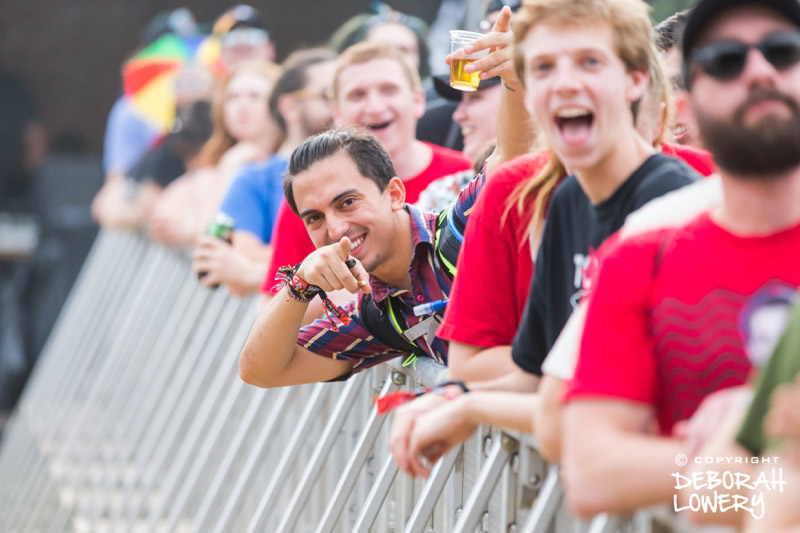 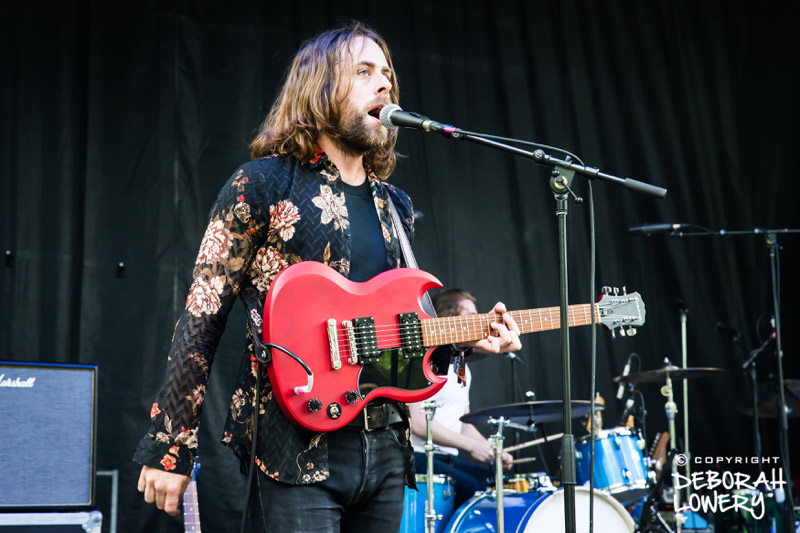 “This is the first summer we’ve played festivals, as opposed to volunteering – which is cool, too. But it’s nice to be invited.” So The Nude Party began the final day of Shaky Knees ’19 on the Piedmont Stage. A rockabilly garage party, suitably upbeat for this early in the day, they are so old-timey that they’ve got a song about “The kids these days” (albeit tongue-in-cheek). Also a good fit for early on the last day was the relaxed, light jam of Rayland Baxter at the Peachtree stage. 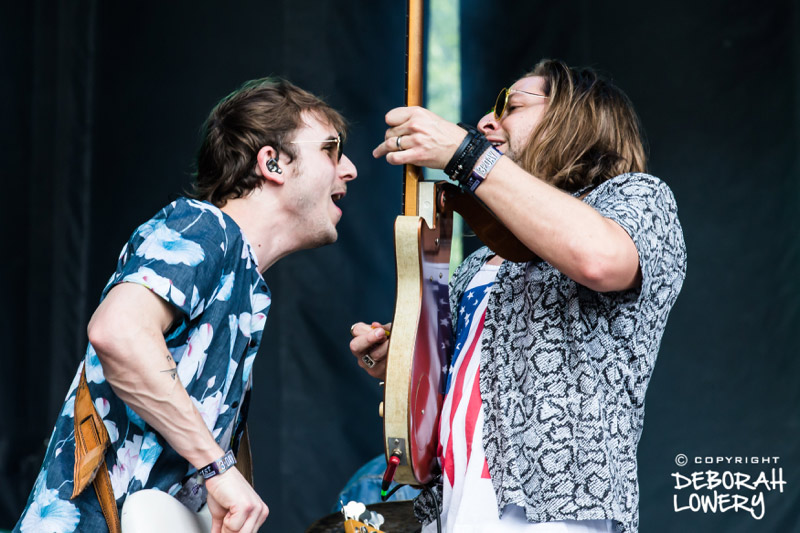 Unlike a lot of festivals these days, Shaky Knees definitely leans into the indie-rock. Cases in point were Demob Happy at the shady Criminal Records Stage, Slothrust on the pavement of the Ponce de Leon Stage, and Welshly Arms over at the Piedmont Stage. Not Welsh but Southern, very Kings of Leon, which is not a bad thing at all – Southern rock revival, without the negative things about the old Southern rock being revived (i.e., no Confederate flags…).

But Shaky Knees isn’t going to be without electro-pop, like Electric Guest. When not shooting out t-shirts from a t-shirt cannon to the theme song from Game of Thrones on the Peachtree Stage, they were playing upbeat, smooth electro-dance. Similar was the disco-ease of HONNE at the Piedmont Stage, quite pleasing, if also disco-cheese. For a change of that pace was the sweet folk-rock songstress Lucy Dacus at the nice and intimate Criminal Records Stage. 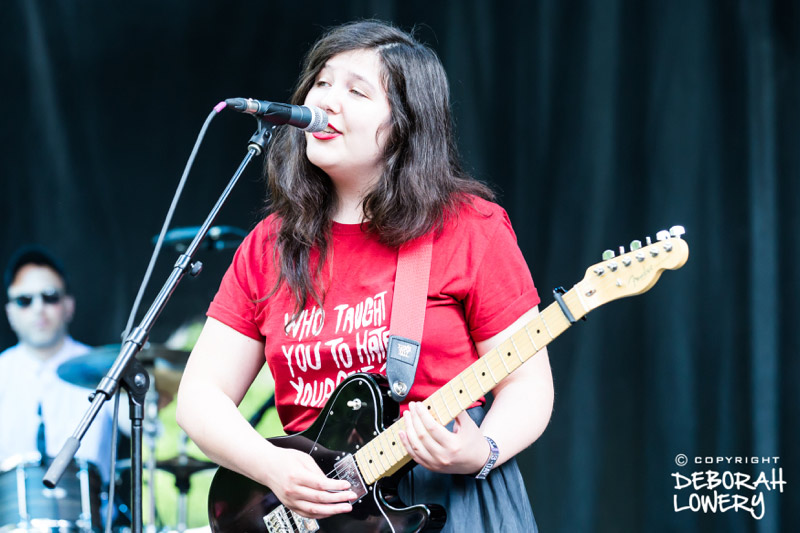 It was no surprise that there was a large, energetic crowd for the energetic Grouplove on the Peachtree Stage, but it was notable that everyone was up not just for old classics like “Itchin’ On a Photograph” but also more recent such as “I’m With You”, and even the brand-new, yet-to-be-released “Deleter” – the band was even doing a video, with singer/keyboardist Hannah Hooper going into the crowd with her GroPro on a stick. She and singer/guitarist/husband Christian Zucconi (QRO interview together) went into the crowd multiple times (note: pretty young girls – and the pretty young boys who love them – love Grouplove). 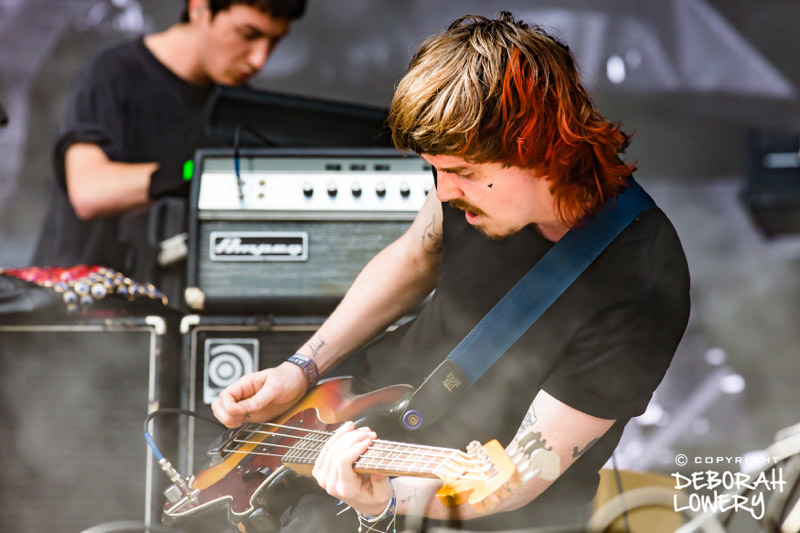 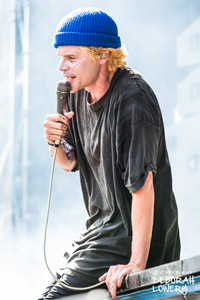 But special mention needs to be made of bassist Daniel Gleason. Hooper joked that he was looking “dehydrated,” and wanted him to drink a beer out of his shoe – apparently something he’s been doing (or been forced to do) regularly; Hooper noted that he’s the only one in the band who doesn’t get sick, and that the “shoey” should be a new health fad. To “make it grosser,” when they couldn’t find a beer on stage, they took a half-drunk one from a fan. The band segued from their early hit “Tongue Tied” (with Hooper all the way into the pit) into a cover of David Bowie’s classic “Space Oddity”, and covered “Sabotage”, a regular cover of theirs, for the last time. They still ended with breakthrough “Colours”, as always, and it was still great. 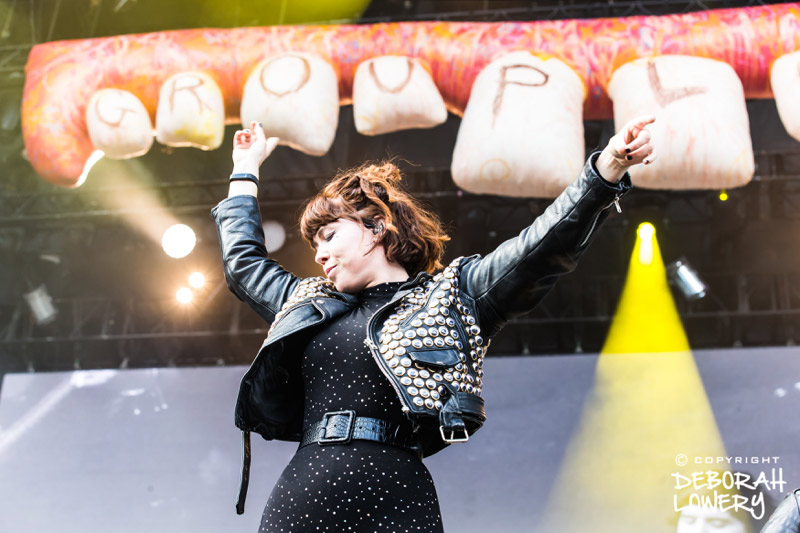 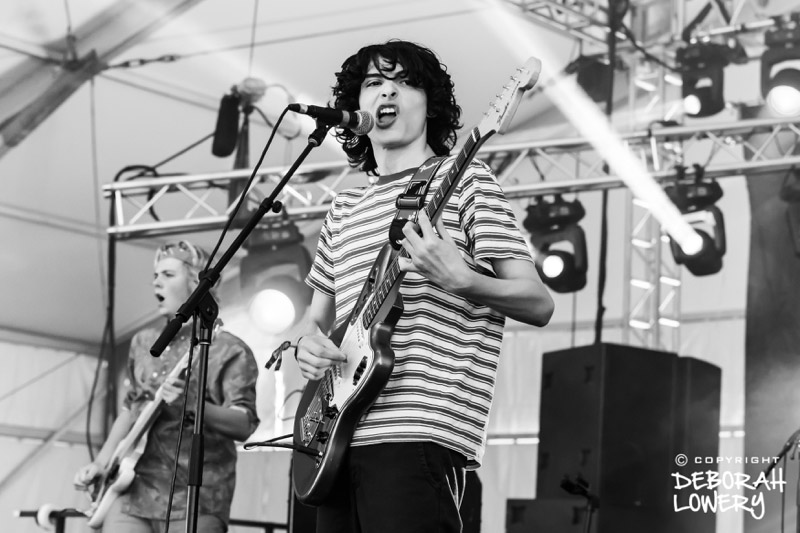 Over at the Ponce de Leon Stage, underneath the canopy and above the pavement, was the rising indie-rock of Calpurnia (which, yes, has Finn Wolfhard of Stranger Things and It). Across the street was the much more established Deerhunter, playing the small-for-them Criminal Records Stage. That stage might have been the smallest, but it was also the nicest, all shade and crowd close to the stage, with the bar right there, people on the lawn, enjoying the day. 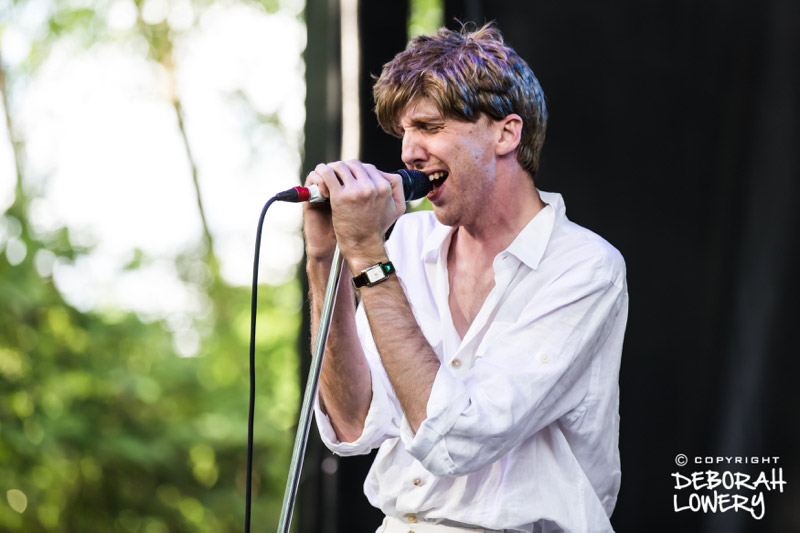 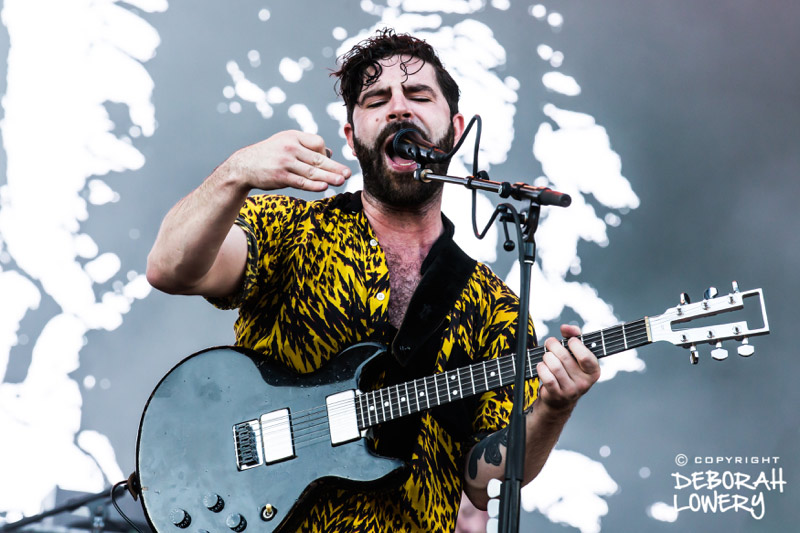 U.K.’s Foals have been criticized by long-time fans for moving away from their original sound – but can you blame them, when they can do big performances like their Shaky Knees one at the main Peachtree Stage? They were definitely into new songs from this year’s Everything Not Saved Will Be Lost Vol. 1 (QRO review), such as “Give It All”. Closing out the Piedmont Stage was Maggie Rogers, so fun and exuberant that there’s really no good reason not to be in love with her. 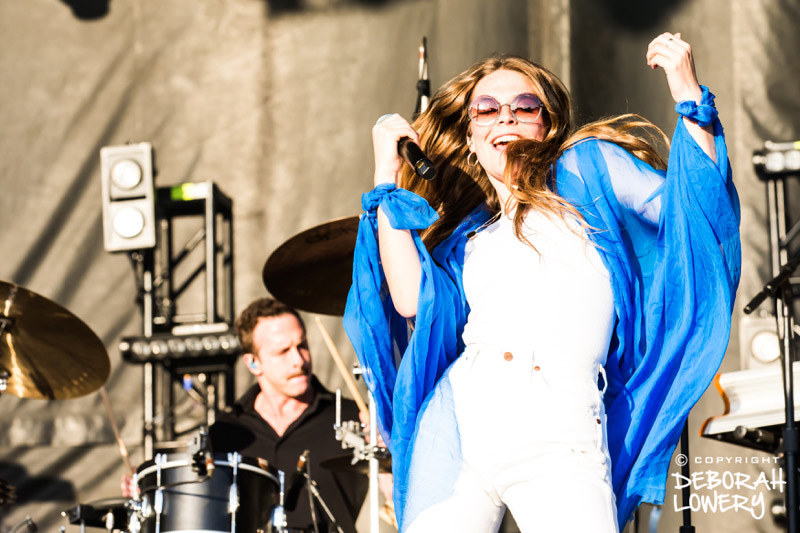 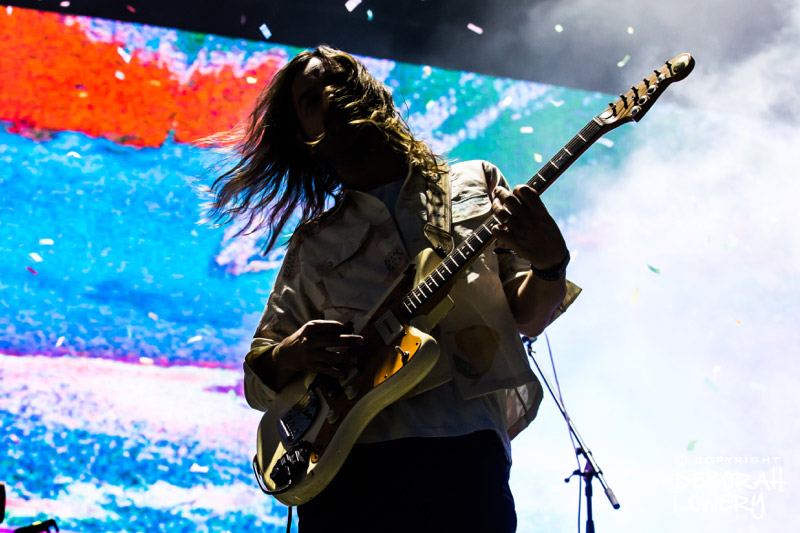 But no one’s gotten as big as Tame Impala, the Western Australians now at the level where they can headline Coachella – and Shaky Knees. There was a giant, wild crowd, from dudes pushing their way forward to dudes puking their way on the side. Indeed, maybe there was a little more energy because Tame Impala are such a young band, an earlier headliner, no rain, and it was the end of festival. They also had some of the best usage of confetti at a festival ever (aided by lack of wind, but bonus points for doing it as the last act, and not having it litter during the rest of the festival) – one can see why they’ve toured with indie rock spectacle masters The Flaming Lips. Yet it hasn’t all gone to their head, still Aussie humble on such pieces as “Feels Like We Only Go Backwards”. 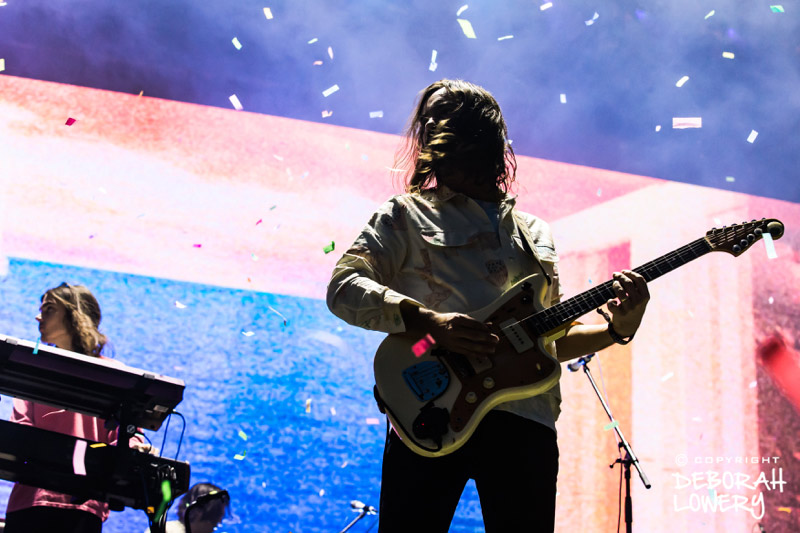